Abhilasha Agarwal: Capturing the journey of women’s cricket in India

A rare Indian woman in cricket photography, Abhilasha was in Australia recently for the ICC T20 Women’s World Cup 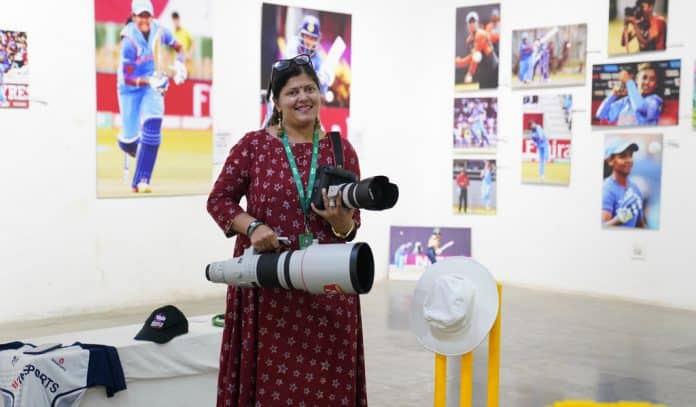 Bangladesh 2014. The ICC Women’s World Twenty20 tournament is on.

A young Indian girl steps out on to the field. It’s her first international event.

The momentous nature of the occasion dawns on her. It’s been a major personal journey for her to get here.

Then, she looks down at her equipment and realises how utterly unprepared she is.

I can’t back out now, she thinks; I’m living my dream.

She walks with her camera to a fellow photographer setting up close by and asks if she can borrow one of his lenses.

“I own several lenses now,” Abhilasha Agarwal laughed as she spoke with Indian Link on the sidelines of the recently concluded ICC Women’s T20 World Cup.

The Baroda girl also owns some 80,000 photographs of cricketers – all women.

Having won the Bangladesh gig through thoroughly unorthodox means – she landed up at the stadium and hassled media officials until they let her in, because Indian authorities had brushed her aside – Abhilasha is now recognised by the ICC as well as the Asian Cricket Council. It puts her in a rare breed of women in India involved in sports photography.

The self-taught professional claims though that she would rather have been a cricketer.

“I played lots of gully cricket, and there was just no opportunity to take it up further,” she revealed. “As a huge cricket fan – and an even bigger supporter and enthusiast of women’s cricket in particular – I took to blogging about the women’s game.”

She discovered however that it was difficult to find photos to accompany her pieces.

“I found a few of Jhulan Goswami and Mithali Raj and random ones of an up-and-comer called Harman Kaur, and that was about it.”

While India’s male cricketers were becoming major stars with fan followings to rival those from Bollywood, no one wanted to photograph the female players.

“It was frustrating that no one had pictures, and there was no major archive on the journey and growth of women’s cricket in India.”

It was then that Abhilasha realised she would have to take her own photos. She picked up her simple generic camera – and Winsports, her small entrepreneurship firm for sports images and blogging, was born.

The platform grew, and Abhilasha began to travel around the country.

“When the 2014 Women’s Twenty20 came along, I sought accreditation. It was denied; I was told that official photographers were already on the books. So I bought my own tickets, and when I wormed my way on to the grounds, I found the official photographers would stay around for about 20 minutes and then just up and leave! There was simply no interest in the game or in the players.”

She managed to get some good shots – with the borrowed lens.

Abhilasha then covered the 2016 men’s and women’s competition, and her photos began to get picked up.

“I began applying with greater vigour, and for the Asia Cup I managed to become official photographer. I’ve now done two Asia Cups, many bilateral series, and this was my seventh World Cup.”

In 2017 she produced a coffee table book, launching it at the England World Cup. In 2019 she followed it up with another one, coming out with a one-of-its-kind photography exhibition of India’s women cricketers called The Game Changers. Received well by the media, the exhibition was attended by the entire women’s team.

What have been her favourite shots, over the years?

“Smriti Mandhana in action,” she replied without hesitation. “Also Harman’s sixes and her facial expressions.”

At the crux of it all however, the second-class treatment continued, and does to this day: media platforms are happy to run her pics if she contacts them, but no one pays.

“Because I’m freelance, I pay my own way through. In this World Cup for instance I’ve paid extra on every flight – including within Australia – because my hand luggage of photography equipment is heavier than the stipulated seven kilos. I’ve carried three Canon lenses, a monopod and a tripod!”

So how does she finance her trips?

“Yes it’s an expensive ‘hobby’ but it has never been about the money,” Abhilasha laughed. “This is my passion: other women buy diamonds and handbags, I want to get out there and take photos of women playing cricket.”

She added thoughtfully, “I choose to do this, it gives me much satisfaction. When I enter the ground to cover Team India – I have this immense sense of pride to be able to capture the precious moments of our team. And that often I am the only Indian – certainly the only woman – to have done this for the last three World Cups. I hope to become the first ever woman photographer to have covered more than 10 international Women’s Cricket events.”

On this very tour, Abhilasha found herself to be the only woman in the photographers’ pack and in the media rooms. “I’m so happy to say that the guys have all come up to me and had a chat, and many have said it’s good to see me part of it all. They’ve treated me like one of them; today one of them said your lenses are bigger than you!”

Her stand-out shots this tour, she revealed, have been Poonam Yadav rejoicing, and Shafali Verma batting.

“I can safely say I have shots of every single Indian player – mine must surely be the largest archives of photos of our young team.”

She gets much regard from the girls themselves. “They often tell me, Didi aap aaye ho to hume apni photo dekhne ko mil jayegi (You’re here so we know there will be photos of us for sure) and because of you our team has been archived.”

What about the Australian players?

Having been involved with the tournament over its entire length, Abhilasha has some interesting observations to make as well.

“I think the quality of the game has gone up,” she remarked. “I enjoyed all of India’s matches, Aus-South Africa, and Thailand-Pakistan. And not just with the cricket. In every other aspect as well, the entire experience has been memorable – the crowds, the facilities provided by Cricket Australia, and the arrangements by the ICC.”

What about the final moments of the tournament?

“I was right there taking it all in but didn’t have the heart to photograph the girls in tears! Billie Jean King, I thought, was wonderful – so inspiring as she consoled our girls and brought their spirits up. When women support each other, incredible things happen.”