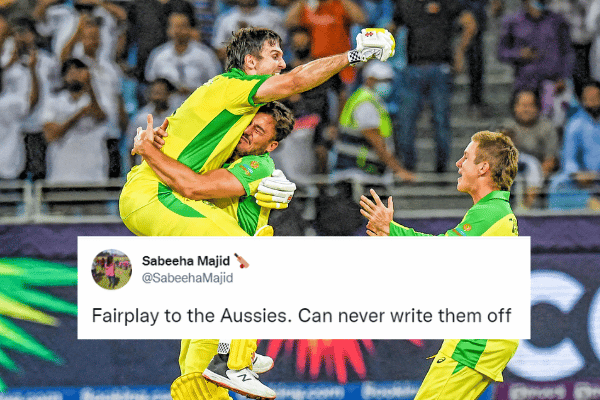 In the early hours of Monday, the Australian team lifted the T20 World Cup trophy for the first time, in an eight-wicket victory over New Zealand in Dubai.

For those who choose to forgo their sleep in favour of watching the match, it was certainly an entertaining one. Mitchell Marsh and David Warner, whose performances have been wanting for much of the tournament, stepped up to the plate to deliver their team to the finish line.

So glad that I stayed up late to watch this!!! pic.twitter.com/1QMAtX5pft

Fairplay to the Aussies. Can never write them off

There was plenty of chatter about Mitch Marsh’s tremendous 77 not out that led his team to victory.

Remember this from the 2019 Ashes when @beastieboy07 asked him about how he’s viewed back in Australia: “Yeah, most of Australia hate me.” Probably not anymore, Mitch #T20WorldCup pic.twitter.com/REJJlI7PUL

Take a Bow, man!!
A captain’s knock right when it was needed. Again showed that he is a big match player !!

Coach Justin Langer, who’s copped his fair share of criticism in the last year, seemingly won over even the sternest of fans.

Massive congratulations…super achievement…and Justin Langer,well let’s just say those who doubted him hold ur hands up and congratulate him…he deserves it as much as anyone.xmb https://t.co/Zl5E29G1MU

Justin Langer now one of the most decorated T20 coaches in history: 3xBBL champion and now World Cup winner.

And Indian cricket fans couldn’t miss out on a few (harmless?) zingers.

This year Dubai has been about ‘wear a yellow and win a trophy’ .

Interestingly, Australia now holds both T20 world titles after the women’s team won the tournament back in March 2020.

I sense this win will inspire Australia’s rise to eminence in cricket once again. Across formats

What did you think about the T20 World Cup final? Let us know in the comments below!