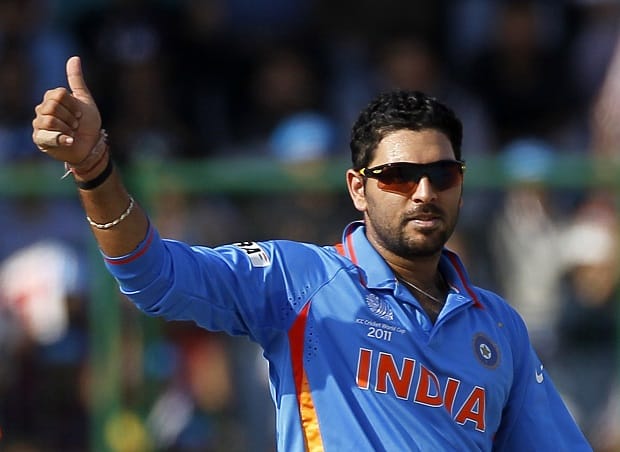 Two brilliant performances from Yuvraj Singh and Ravichandran Ashwin saw India through in their last Group 2 match of the ICC World Twenty20 against Australia by 73 runs at the Sher-e-Bangla National Stadium at Mirpur (Bangladesh) on March 30.

Put in to bat, India were powered to 159/7 with Yuvraj’s blistering knock of 60 from 43 deliveries. In reply, Australia were dismally bowled out for their second lowest ever Twenty20 International score of 86.

Off spinner Ashwin was the key as he clinched 4/11 in 3.2 overs, the best bowling figures by an Indian in the format.

India did not take off well as they lost wickets at regular intervals, including star batsman Virat Kohli (23).

The 2007 edition champions were reeling at 66/4 in the 12th over when Yuvraj and skipper Mahendra Singh Dhoni (24) joined hands for an 84-run fifth-wicket partnership to take India well past the 150-mark.

Southpaw Yuvraj struck form after long, hitting five boundaries and four sixes in his innings with a strike rate of 139.53.

Australia used six bowlers and all managed to take a wicket each.

The men from Down Under never really threatened India anytime with their batting as they kept losing wickets right from the start. Only three of their batsman reached double figures with Glenn Maxwell top scoring with 23.

Medium pacer Bhuvneshwar Kumar swung the ball beautifully at the start and finished with figures of 1/7 from three overs. But it was man of the match Ashwin who really did the trick with only 14 of his deliveries.

Leg spinner Amit Mishra took two wickets while Mohammed Shami and Ravindra Jadeja had to be content with one apiece.

It is a rare occasion when all four consecutive man of the match awards in India’s games have been given to spinners with Mishra picking up the first two while Ashwin clinching the latter two.

India now have won four consecutive matches on the trot to top Group 2 with eight points. They had already qualified for the semifinals after beating hosts Bangladesh Friday while Australia have been knocked out of the competition.

The Pakistan vs West Indies clash Tuesday will decide which team goes to the last four along with India from Group 2.