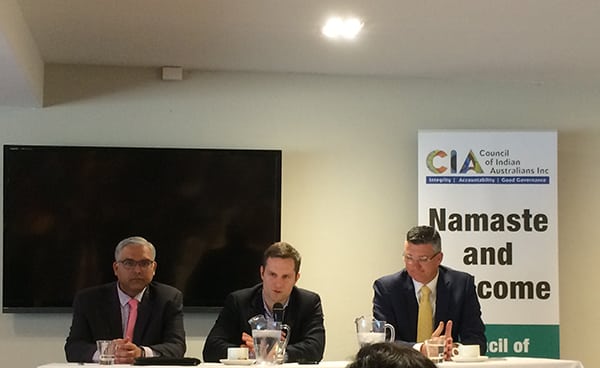 Speaking at an immigration forum organised by the Council of Indian Australians (CIA) on 6 August, Assistant Minister for Immigration and Border Protection Alex Hawke stressed that the Federal Government is pursuing reforms in the parental visa system and respects the desires of the citizens to bring their families together. However, he clarified, due to the high costs of healthcare and visa enforcement to the taxpayers, there are no immediate changes to the existing and proposed visa fees.

A sizeable group of Australians of sub-continental origin gathered at Toongabbie Sports Club on Sunday morning to interact with the Assistant Minister in person and have their queries answered.

Following the announcement of a new category of parental visas called Temporary Sponsored Parent Visa, members of the community have expressed concern about various aspects of the visa including the costs. The proposed new visa costs up to $10,000 per person for a five-year stay, in addition to the costs of compulsory private health insurance for visa holders. The visa can be renewed only once.

Addressing the issue, Hawke said that he considered the visa costs reasonable since the new category allows for a continuous stay for up to five years, resulting in savings in travel costs compared to short-term visitor visas. The new visa category is subject to approval of the federal parliament and Hawke expressed optimism that it will come into effect by the end of 2017. Hawke also revealed that as per the estimates of the productivity commission, each aged resident of Australia costs the tax payer between $400,000 to $500,000 and compared to this, he felt that the costs of various visas including the contributory parent visa are justifiable.

Explaining the recent changes to immigration policy including the changes to 457 Visa, Hawke said that it is this Government’s policy to make sure Australians get first priority for local jobs, and work visa quotas are now reviewed every six months to ensure that locals don’t remain unemployed while foreigners are offered jobs. Answering a question about why the Government is continuing to issue visas to accountants and doctors despite an oversupply in the capital cities, Hawke said that this is due to a shortage of doctors in rural areas and there is a need for accountants as per the assessment of the accounting professional bodies.

The Assistant Minster was also asked if the Government is planning to help new migrants secure jobs in the market, given that private employers raise the issue of lack of local experience, and government jobs are often restricted to citizens. Hawke said that efforts are being made by various community organisations to bridge the cultural gap between employers and new migrants, helping them secure jobs easily.

One of the participants of the forum, Ahmed from Afghanistan, complained that visitor visas for his parents were rejected seven times and sought the Assistant Minister’s help to bring them over. Responding to this, Hawke said that while he cannot comment on individual cases in public, he would look into the matter to help in any way he can.

While addressing this issue, Mr Hawke reiterated that visa rules need to be respected and several cases have recently become known where aged parents arriving in Australia on visitor visas overstayed their permitted stay period. Enforcement of visa conditions is a big reason why visa costs are higher for parent category, he explained.

Speaking to Indian Link after the event, Hawke said that he believed that migrants from the Indian sub-continent have integrated well with the Australian community due to the shared values of family, religious freedom and hard work.

Hawke also addressed the issue of the recently thwarted terrorist threat in Sydney and told the gathering that as per the assessment of General Petraeus, former head of CIA of United States, radical Islamic terrorism is likely to be a multi-generational threat and communities need to be vigilant towards the dangers it poses. However, he clarified, it is not the Government’s policy to discriminate against any particular religion or country, and there is no possibility of Australia replicating the ‘Muslim ban’ imposed by the Trump administration in the United States.

Mohit Kumar, President of the Council of Indian Australians, also spoke at the event and urged the participants to look at the bigger picture when it comes to parental visas.

Medicare, he said, would be under stress if burdened with more seniors and in order to preserve the unique system for the children and grandchildren of Australians, it is necessary to support the government’s policies.

Kuldeep gets hat-trick as India beat Australia in second ODI