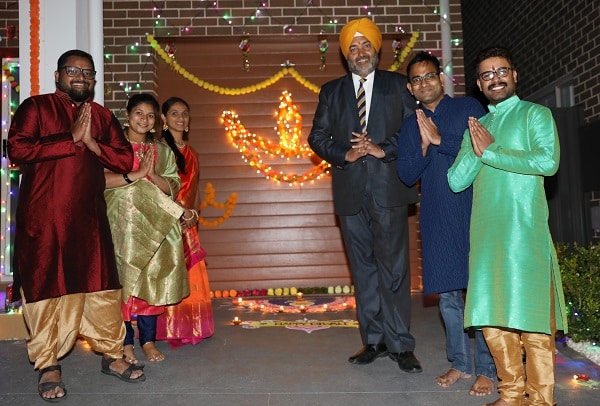 “It’s been an amazing Diwali,” a beaming Apurv Kasoorkar tells Indian Link. Not only did he walk away with a bunch of awards for his Diwali decorations at Blacktown City Council’s annual Diwali Lights Competition, his first child – a girl – was born on Diwali night.

It’s clearly a case of “Lakshmi ghar aayi hai” (Goddess Lakshmi comes home), as Baby gets the name Ramaa, one of the many names by which the Goddess, who is venerated on Diwali, is known.

The other prizes may pale in comparison, but Apurv and his wife Sarita Kadukar brought home the prize for Best Decorations in the Ward, Best Rangoli, and second prize overall.

As if this was not enough, Apurv also accepted the prize, with his neighbours, for the Best Decorated Street. This involves a street plaque which is going to be installed permanently at the entry to their street, Ward St in Schofields.

For the third year running, Blacktown City Council (inspired by Councillor Moninder Singh) has been encouraging its citizens, of Indian origin or otherwise, to shine a light for Diwali, the Hindu festival of lights.

Homes in Prospect, Schofields, Hebersham, Riverstone, The Ponds, Bungarribee and Kings Langley were illuminated for the contest.

In typical ‘row of lights’ tradition, these homes had strings of light decorating their façade – on the walls, down windows, around pillars, on the roof, on the fence, along the lawn.

There were fairy lights, cascading lights, even laser light projections.

Strings of light were also fashioned into Ganeshas, Om symbols, diyas, and in one instance, a peacock in full spread.

Other decorations complemented the light strings – flower garlands on the doors, rangolis on the driveway, even rolling fabrics overhead.

“We’ve had increased numbers this year,” Deputy Mayor Julie Griffiths said at the awards ceremony. “There are 80,000 Indian origin residents in Blacktown out of 370,000. You bring us on board with your culture, and make our city beautiful at Diwali.”

She spoke of going round the streets to see the decorations.

“One family was on their hands and knees redoing their rangoli as it had just rained,” she revealed. “I went in and spent some time with them. I’ve been amazed to hear of the teamwork by families for Diwali illuminations.”

In many cases, it’s been teamwork by neighbours as well. Along Ward St in Schofields, where Apurv and Sarita live, some 30 homes got together and planned their decorations. Sarita took on the role of coordinating authority, as administrator of the street’s WhatsApp group. After the judging, a giant potluck dinner on the street was planned, with sparklers and diyas. The street party did go ahead, but as it turned out, without the organisers, because Sarita’s contractions began soon after the judges came by.

Apurv and Sarita only moved to the Blacktown area this year, having arrived in Australia in 2017.

In a short time, they’ve been able to build up a wonderful community with people in their neighbourhood not only from different parts of India but also the world.

Their neighbour Manjunath Hukkeri, who was at the awards ceremony, spoke of how the friends are now looking forward to the Council’s Christmas lights contest.

The awards ceremony, organised by Event and Protocol Supervisor Kevin Poilly and Civic Events Officer Susan Sroba, showcased all the Diwali decorations as the finalists met over a late afternoon tea. (The Sadhu family of Bungarribee took the first place yet again in this year’s contest).

The over all winners are:

The Diwali Lights Competition is a wonderful way to make the New Australians in the area feel accepted and included.

It motivates them to give back to the community in their own way, as they settle in at their new home.

‘Where are you going to go, India?’: QLD Premier shuts down reporters

COVID19: Fundraising efforts continue for the most affected