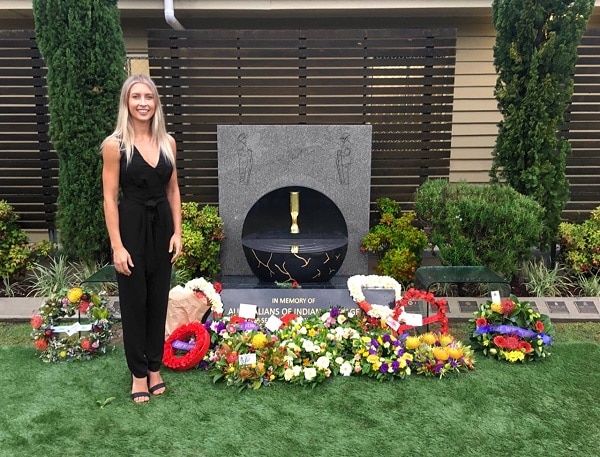 Reading Time: 5 minutesOn Remembrance Day 11 Nov this year, a monument was unveiled at Sunnybank RSL Brisbane to commemorate Indian participation in Australia’s war efforts. Griffith University architecture student Bianca Archer won a competition to design the memorial. The two-year project was initiated by Brisbane’s Indian community led by Surendra Prasad OAM.
A REVELATION OF THE TRUTH
BIANCA ARCHER
I first became aware of Indian-origin Australians who served in our wars, about a year and a half ago as a first year student of architecture.


This part of our history was introduced to us in the form of an assignment/competition: we had to design a war memorial to honour the Indian participation in the World Wars, especially alongside our own forces, as well as Indian-origin Australian soldiers.
The history of it all, buried so far, has come to light only recently, and we were left to do our own research.
It turned out to be quite an emotional experience for me. As I delved deeper into the context, I gained a sense of realisation regarding our history as Australians, but also regarding the wider meaning of war itself.
I imagined to myself what it must have been like to be forced to fight a war they had nothing to do with, and to represent a country which was not their own. Many words came to mind: honour, loyalty, bravery, commitment, heroism.

But then to have to comprehend the truth behind the matter – the fact that their sacrifice and contribution was – and still is – largely unrecognised, made me feel a sense of sadness, betrayal, anger and disbelief. I wanted to express this in built form because I wanted other people to feel it too.
Visiting the Sunnybank RSL premises where the monument would sit, the design concept began to take shape in my mind.
The concept I came up with involved a missing piece, as well as a revelation of the truth.
The design features a large sphere representing our earth and the unification of humanity. The weight of the monument embodies the heavy death toll of the wars, and the sadness that I felt and want others to feel. I want viewers to touch and feel the coldness of it all.
The missing piece of the sphere is intentional, as it symbolises the missing piece of history in which the story of the Indian soldiers was previously omitted. By “unearthing” this piece of history, we are able to able to reconstruct these stories as we commemorate, honour and preserve them in loving memory.

The major element in the design, is the hundred-year-old artillery case, which is fashioned into “trench art”, piercing through the centre of the sphere as it gently touches its core – creating a water ripple effect within its reflective surface.
The cracks upon the surface, were originally intended to allow light to come through from within somehow, to represent the story coming to light. But upon deliberation with the Indian architect who helped construct, it was decided to leave the cracks in gold.
To conclude, the internal portion of this monument represents “reflection”, of both sacrifice and healing, while serving as a tangible link between past, present and future. By changing the way in which we orientate ourselves when viewing this design, we ultimately influence our ability to change the way in which we perceive war.

As my first real-life project, it gives me a thrill to see it listed on www.monumentaustralia.org.au. I’ve never designed a memorial before – it’s usually houses!
I’m a spiritual person, passionate about holistic health and wellness and want to incorporate that with architecture.
I can see now that the memorial means so much to the community. It has been inspiring to be part of this entire endeavour.
***
LEST WE FORGET
SURENDRA PRASAD OAM
The idea for a memorial to Indian soldiers who served the Australian cause came in 2015. The history about their contributions were being unearthed and it touched a deep chord within me, especially as it went unrecognised.
I started discussions with others in our community about building a memorial, and the support I received was overwhelming.
The Federal member for Moreton, Graham Perrett arranged a meeting with the President of the RSL Sub Branch Sunnybank, Hugh Polson, and we discussed a possible space to house the monument.

A management committee – the Australians of Indian Heritage War Memorial Committee (AIHWMC) – was formed in July 2015.  It drew members from different sectors of the Indian community, the RSL sub-branch and politicians from both major parties. Capt Chetan Chandegave, Defence Adviser at the Indian High Commission also offered his support.
Much support also came from a good mate of mine, Lewis Lee OAM, who, as Chairman of the Australians of Chinese Heritage War Memorial Committee (ACHWMC), was instrumental in the installation of a similar Chinese monument a few years ago.
The cost to build our monument was estimated at around $30,000: we raised some of this money ourselves, but very soon the federal government came on board with a $30,000 commitment. We thank Nick Monsour and Ross Vasta MP (Federal member for Bonner), for their efforts in obtaining this grant.
For the monument itself, we requested Griffith University, Gold Coast, to design the memorial. Dr Ruwan Fernando from the Griffith University School of Architecture became directly involved, designing a four-week project with his first year students. A group of 90 students participated in the preliminary design competition. The students were encouraged to research cultural aspects, including art and customs and incorporate this into their model. Eleven students were picked as finalists to develop the design further.

A panel of five judges was appointed to evaluate the design entries. At a gala dinner on 12 November 2016, Bianca Archer’s submission was announced as the winner.
We are very proud to see this project, the first of its kind in Queensland, finally come to fruition, thanks to the joint efforts of the AIHWM committee, RSL Sunnybank, and the staff and students of Griffith University.
Depicting a turban-clad Indian-origin soldier together with a mainstream peer, this monument will serve as a reminder and tribute to all Australians of Indian heritage who served in our armed forces.
Apart from the monument, in memory of the fallen Australian-Indian soldiers, the committee has set up an educational bursary for high school students valued up to $1000 a year. This financial support has gone out to deserving students in the past two years and we hope to continue providing this assistance in coming years as well.
Surendra Prasad OAM
Chairman – Australian Indian Heritage War Memorial Committee
Bianca Archer and Surendra Prasad spoke to RAJNI ANAND LUTHRA
- Advertisement -
Share
WhatsApp
Facebook
Twitter
Linkedin
Previous articleChanging face of NSW Young Labor
Next articleKya aap taiyyar hain for Hindi cricket commentary?