Bharatiya Mandir vandalism: "We will rebuild"

Priest Pandit Paras Ram Maharaj tells RAJNI ANAND LUTHRA that community members are shocked by the act, but will work together to restore the temple 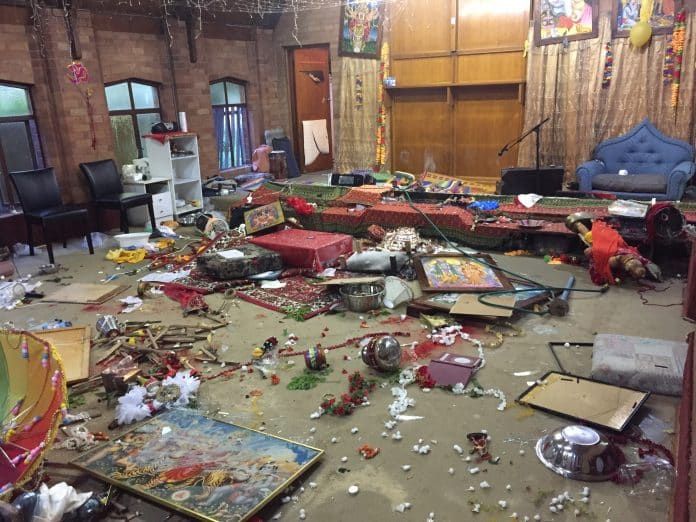 When priest Pandit Paras Ram Maharaj arrived at the Bharatiya Mandir at Regents Park for regular worship on the evening of Sunday 14 Oct, he knew immediately something was amiss. “It was about 6 pm,” Panditji recounted to Indian Link. “I saw some smoke, and wondered if someone had started the evening puja (worship) without me.”
Then he saw a young woman come out and take the garden hose in. “Andar do-teen log the (there were two or three people inside)” he said. “They made a quick getaway via the back window.”
Upon entering, Panditji was shocked to see the premises desecrated, idols smashed to the floor and temple property strewn about. “Hamare dost ne police ko phone kiya (a friend phoned the police,” Panditji went on. “They came and sealed the premises immediately. They conducted their forensic tests, and left only at 2am.”

No findings from the enquiry have been made public yet. The community has been shocked as news of the incident got out this morning via a release put out by the Hindu Council of Australia. That the misdeed occurred at the auspicious time of Navratri – a major Hindu festival – is doubly hurtful. The festival, a major celebration for Hindus, spans nine nights and is dedicated to the feminine principle of nature.
Members of the congregation at Bharatiya Temple have been attending worship daily for Navratri. “We’ve made temporary arrangements at the back of the temple premises for now,” Panditji revealed, so that daily worship continues as planned. “Some 250 members have been attending our prayers.”
What have the security arrangements been like at the temple? “Kuch khaas nahin (no special arrangements), because we never felt the need,” Panditji replied.
The Hindu Council of Australia said that the incident “has caused a lot of pain and anguish to devotees”. Meanwhile, government ministers have scampered to allay fears among the Hindu community, reminding all of the punishments that such acts accrue.

The NSW Minister for Multiculturalism Ray Willimas said in a statement, “The NSW Government will not tolerate the desecration of items of cultural and religious significance, which threaten the cohesion of multicultural communities. I am appalled at the destruction of more than 30 statues of Hindu Gods and the setting of small fires inside the Bharatiya Mandir Temple in Regents Park.”

He added, “The NSW Liberals & Nationals Government recently strengthened the Crimes Act to protect our diverse communities from individuals who publicly incite or threaten violence against people based on their race or religion and will carry a maximum three-year jail sentence. I understand police are currently investigating the vandalism and sincerely hope the perpetrators are brought to justice.”
Minister for Immigration, Citizenship and Multicultural Affairs David Coleman also condemned the attack, saying, “Vandalism of a place of religious gathering, which is central to its community, is deplorable. These actions go against the very essence of Australian society.” He added, “Australia is a stronger nation because of our multicultural and immigration heritage. As a nation built from migration, the Australian Government will always uphold the fundamental principle that we are a tolerant, respectful and inclusive country.”
NSW Opposition Leader Luke Foley also expressed his shock at the incident. “I strongly condemn the cowardly and hateful attack on the Bhartiye Mandir Hindu Temple in Regents Park, this is a crime against peaceful Australians who live their faith and hurt nobody. I am disgusted at the desecration of more than 30 statues of Hindu Gods, and the setting of small fires throughout the temple.” He added, “I stand with the Hindu community in my electorate of Auburn and in NSW, and hope that those who perpetrated this disgraceful attack are brought to justice.”
Does Panditji have any suspicions as to who may have committed this deplorable act, and why? “They were a group of youngsters,” he replied. “It’s hard to say why… But it looks as though it was a hate crime. You can tell by looking at the pictures.”
The temple has been operating at its 42 Kibo Road address since it was purchased 20 years ago – it used to function as an Anglican Church before that. Temple authorities claim they’ve had no problems, or experienced any form of hardship, since its inception in 1994. In 2013, the Auburn-based Sri Mandir Temple had suffered an arson attack.
Looking to the future, Panditji observed, “Safai karke, punar-nirvaachit karna padega. Temple Committee Hindu Council ke sahyog se dhan raashi ekattha karegi. (We’ll clean up and then start the process of redevelopment. Our Committee will fundraise with the support of the Hindu Council.”
The festive season has just been ushered in for Hindus the world over, and the thoughts will be utmost in Sydney’s Hindu community now that we should see it through with the usual spirit of sharing that marks all our celebrations.