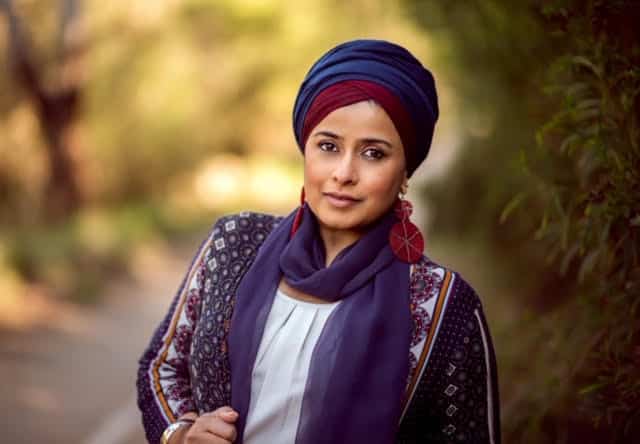 With a soft-spoken demeanour that belies an underlying courage of conviction, her trademark turban and African-inspired attire, which sometimes draw first attention, quickly pale into insignificance by the sheer power of her words. It’s as if she’s trying to say, stop looking at me and listen to what I have to say: I am more than the colour of my skin.

It’s what put her on many women-to-watch, movers-and-shakers, and top-thinker lists, and on the board of a variety of organisations such as The Australian Centre for the Moving Image (ACMI), NOW Australia, Australian Muslim Women’s Centre for Human Rights, Luke Batty Foundation and Lentil As Anything.

Congratulations on the OAM honour. How do you think this will help further your cause?

Receiving the honour is symbolic. If the premise is to acknowledge the platform that diverse Australians have, to draw attention to their accomplishments or their achievement or struggles or disadvantages, then it’s a positive. I think there are some highlights that have definitely been overlooked by mainstream media and acknowledgement of the success of diverse Australians in this capacity is very educative.

What draws you to activism on diversity and religion?

I wanted to be a catalyst by having the opportunity to represent the narrative of a particular community that was being misrepresented. In the case of women of colour or Muslim women or women of different cultural backgrounds, often the picture can be quite negative or overlooked. I had the privilege of education, employment and networking here in Australia and I felt that it was my responsibility to use that to communicate what the people of my community are capable of and have done. We need to take the role of leadership and media and use it responsibly.

In your opinion what undermines the democratic process most when it comes to mainstream media as it is today?

It is the monopoly of Australian media that is owned by a few individuals: their personal vision is shaping how media responds to issues, and their take on everything from immigration to climate change. It is particularly difficult to tackle this and this is the experience of a vast ‘minority’ of Australians.

You are involved in a variety of causes and on the board of several organisations like Ambulance Victoria and ACMI. Is there a common thread that attracts you to these eclectic fields?

I am particularly proud to be associated with Ambulance Victoria. The work of that organisation in providing health care to Victorians is something to be proud of. I have a strong interest in ACMI particularly in a climate where the value of the arts is being affected by cuts in funding.

These organisations are pushing the agenda of story telling and their voices are very important. The interest I have in them is being with people – the inclusion of community – as these are issues that both these organisations address.

Pertinent to my interest is the fact that it is increasingly important for diverse Australians to be seen as representative voices on all platforms, and not just be experts in their cultural field. The opportunity to sit on board from a variety of backgrounds is reflecting the fact that diverse Australians have a variety of capacity and we should not just be pigeon-holed within the ethnic point.

How do you measure the success of your efforts? How do you know that a change is being generated?

The small picture indication would be the feedback I get, especially from young people. During presentations in schools people often come up to me privately or send me a message online saying “I am so glad that you came and spoke at our school today as we never get a speaker that looks like us”.

The big story validation is when in the space of culture-conscious training, many corporate organisations are increasingly seeking diversity in their leadership. This is also on the agenda for councils, marketing organisations, media and many others. Diversity was not on the agenda fifteen years ago but it is now and it is a clear indication that the issue is finally having traction and making change.

What would you consider as the most rewarding part of your work?

I really enjoy working with students, particularly from high schools. Their appetite for knowledge is enormous. We tend to underestimate how open minded, inquisitive and critical their young minds can be.  When I speak to them about identity and belonging, their maturity and understanding is very sophisticated and I find I grow with that transaction. I go to give them a presentation but I come out of it richer and wiser.

One of the causes you support is Lentil as Anything. Tell us about your experience with this unique concept.

One of the most exciting, enlightening and educating boards that I have ever been on, is Lentil As Anything. I went there to attend a meeting with my friend Shanaka Fernando, the founder of Lentil and eventually ended up chairing the organisation for a few years. There were many challenges but the strength of the people involved and their ideas and efforts kept the organisation strong and going.

It is very inclusive and you can eat there no matter what your background. It’s an amazing concept relying on the goodwill of people. The pay-as-you-feel movement created by Lentil as Anything is one of the first modern social enterprises, a restaurant that provides food to anyone that drops in. Their contribution model where patrons are encouraged to donate what they can through labour, skill or money promotes social cohesion.

How do you achieve work-life balance despite your hectic schedules?

I have some wonderful colleagues in the sector who understand the politics of the climate we work with and have shared interests and experiences with me.  My kids are grown up and are young adults now and they keep me grounded. I also draw strength from my mother, a proud Indian Kenyan woman who migrated to this country, settled down and succeeded so well in raising a family against the odds in a country town where we lived. She continues to inspire me.

What would you suggest to someone who wishes to become an activist starting from an area of disadvantage, be it their gender, minority status or religious affiliation?

My suggestion would be not to underestimate minority experience. America by 2030 will be a majority-minority country. Australia seems to be behind the eight ball but with the amount of diversity we have, I can definitely say that diverse Australians will be incredible game changers in all sectors. My suggestion is, don’t hide, and don’t look at diversity as a liability – it is the most under utilised asset that we have, so embrace it and put it forward.