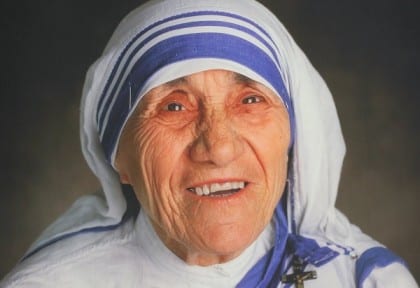 Universally acknowledged for her work with the poor and needy, among the sobriquets she acquired over the course of her life, Mother Teresa became popularly known as the ‘Living Saint of Kolkata’.
And so on Sunday 4 September, Mother Teresa was officially elevated to sainthood after being canonised by Pope Francis at the Vatican.
This is an especially holy time for the followers of Mother Teresa, now officially known as Saint Teresa of Kolkata. Her veneration to the role of Saint took place one day before the 19th anniversary of her death on 5 September, 1997, and 10 September marks the date she received her calling from God to leave the Loreto Order and found the Missionaries of Charity.
Mother Teresa was revered across the globe, including in Australia. Many people are familiar with her mission work in Kolkata, but few are aware that she visited Australia 10 times during her life and that there are 14 Missionaries of Charity houses across Australia. The first house was established in 1969 in outback Bourke by Mother Teresa herself, after she came to know of the needs of the Indigenous Australians through a connection to a Cardinal in Melbourne.
In 1970 she founded the Melbourne Missionaries of Charity, followed by Katherine in 1973. Now there are houses from Sydney to Wagga Wagga in New South Wales, from Brisbane to Perth, and several across the Northern Territory including Alice Springs and Tennant Creek. There are also two houses in Auckland and Wellington in New Zealand, one in East Timor and one in Indonesia (established 2010).

In 1979, Mother Teresa received the Nobel Peace Prize for her work, while in 1982, she was made an Honorary Companion of the Order of Australia on Australia Day, in recognition of her social work in the region.
Sister Maria Lucy M.C., Regional Superior of the Oceania Region of the Missionaries of Charity, says she and her Sisters have always known Mother Teresa was a Saint, and are excited about the canonisation, but it has always been just a matter of time.
“It means that she has been publically recognised,” she says. “We already knew that she was a Saint and now that the Church recognises that, the world recognises that she’s a saintly, holy person, and we can learn much about her and from her.”

Sister Maria Lucy worked with Mother Teresa in Kolkata for five years, and was at her side when she died. She joined the Missionaries of Charity after spending time with Mother Teresa in Kerala, where Sister Maria Lucy grew up.
“She visited my grandmother a few times, and influenced me a lot,” Sister Maria Lucy says. “Knowing the work she was doing, reading the books, having that personal contact with her made me want to join.”
Sister Antonine M.C., Local Superior of the Missionaries of Charity, Sydney, became a nun in the 1970s.
“I saw Malcolm Muggeridge’s documentary ‘Something Beautiful for God’ on ABC television and then I felt called to that kind of work,” Australian-born Sister Antonine says.


The sisters at the Missionaries of Charity, Sydney celebrated Mother Teresa’s canonisation by sharing experiences, memories and stories before attending a celebratory Mass at St Mary’s Cathedral in her honour. The Archbishop of Sydney Anthony Fisher OP made the occasion “very special”.
As he said during his homily, “Perhaps no title captures her so well as the word ‘Mother’, a word that speaks of fruitfulness, tenderness and nurture, both of a spiritual family that grew from a small handful of women in 1949 to somewhere around 5,000 Missionaries of Charity today; and of a family of the poorest of the poor in India and beyond.”
As the Sisters shared stories, Sister Antonine remembered how she met Mother Teresa in Melbourne in 1975 when she visited Australia, then in Papua New Guinea several years later, and again in South Korea.
“Mother [Teresa] was travelling to South Korea from Japan and she wanted to bring us something to make us happy,” she recalls. “So they packed some ice cream with dry ice to take with her. She brought it, with great joy, and said, ‘I brought this from Japan to share’. She was a warm, human person. It was that motherly love, with all of us sitting and eating ice-cream together at 10 o’clock at night.”

Sister Maria Lucy recalled an incident while she was living in India at the Mother House in Kolkata. Mother Teresa was to travel to Delhi later that morning. The novice mistresses gathered to say goodbye to her while she was having breakfast, slowly sipping her tea, as though it was very tasty. Not long after she left, the nuns gathered to eat their own breakfast. “And it was then we realised, we had put salt instead of sugar in her tea!” Sister Maria Lucy reveals. “But she never said a word.”
Sharing another memory, Sister Maria Lucy detailed how, while travelling with Mother Teresa in America, they had a meeting with the Mayor of a major city who sent a stretch limousine to pick them up, along with a police escort.
“Mother [Teresa] got into the car looked around and said, ‘People outside will think, Mother Teresa must have stolen something with all these police around!’ She had a great sense of humour.”

Working within the parish of St Peter’s in Sydney’s Surry Hills, the Sisters undertake a variety of activities in the community such as teaching scripture lessons to local school children. Along with members of the order across the globe, they also care for those less fortunate through their work with orphanages, hospitals and hospices, centres for women, and soup kitchens to feed the homeless. They also provide a kind of companionship.
“We visit the sick and lonely people shut inside,” Sister Maria Lucy explains. “Loneliness is one of the greatest sicknesses. Poverty, Mother called it, loneliness is one of the greatest poverties. She often said, ‘If a person is hungry, we can give them something to eat to satisfy them, but if they are lonely and feel unwanted, it is the greatest poverty.”
As part of their thanksgiving for the canonisation, the Sisters at the Missionaries of Charity of Sydney curated a special exhibition on the life of Mother Teresa, with photographs, icons and artefacts including some of her iconic original shawls and saris.

Sister Maria Lucy shares that initially Mother Teresa wanted the Order’s saris to be all white. “Then people in Kolkata started talking about it saying, ‘We hope she won’t make it all white, because the widows in mourning in Kolkata wear only white so people will think she is a widow,’ so she added the blue stripes.” The colours blue and white are also associated with the Virgin Mary, and so the iconic white sari with the three striped blue border is now widely familiar across the globe.

Mother Teresa’s canonisation and elevation to Saint is not without controversy, however. There are some in Kolkata who resent that their city became known for its poverty through her work, and others who see the missionaries’ efforts among tribal communities in the north-eastern Indian states as problematic proselytising. There are also those who question the miracles attributed to her.
The Sisters are amused by suggestions their Mother is anything less than a true Saint, calling doubters and naysayers “ignorant”.
“We don’t say anything to them. I feel they don’t know much about her,” says Sister Maria Lucy.
“We just pray for them and hope that one day they’ll see,” agrees Sister Antonine. “They’re entitled to what they think, you don’t know where they’re coming from, so you don’t argue the point.”
“Her work shows how special she was,” says Sister Maria Lucy. “Her love for everyone was so visible and equal.”

Indeed the worldwide adoration and admiration of Mother Teresa was on display during the canonisation ceremony as hundreds of thousands gathered in St Peter’s Square. The official Indian delegation included Foreign Minister Sushma Swaraj, Bengal Chief Minister Mamata Banerjee and Delhi Chief Minister Arvind Kejriwal.
Indian Prime Minister Narendra Modi said in a statement on the eve of her canonisation, “As Indians we have to feel proud about the canonisation of Bharat Ratna Mother Teresa. She had dedicated her life for the upliftment of the poor. She was an Albanian, and English language was not her mother tongue, and yet she adopted it as her language and served the poor.”
“She is very well recognised and very well loved in India,” says Sister Maria Lucy. “Christians, Hindus, Muslims, regardless of race and colour and language and religion, everybody loved her and she loved everybody.”
And as Australian Catholic University theologian Joel Hodge told the ABC, “She did really capture the imagination of the world in a way that hardly any other Catholic did.”
- Advertisement -
Share
WhatsApp
Facebook
Twitter
Linkedin
Previous articleChildren’s ode to Hindi
Next articleFeast fit for a king