Reviews of Uri, The Accidental Prime Minister, and Cabaret, BY SUBHASH K. JHA. 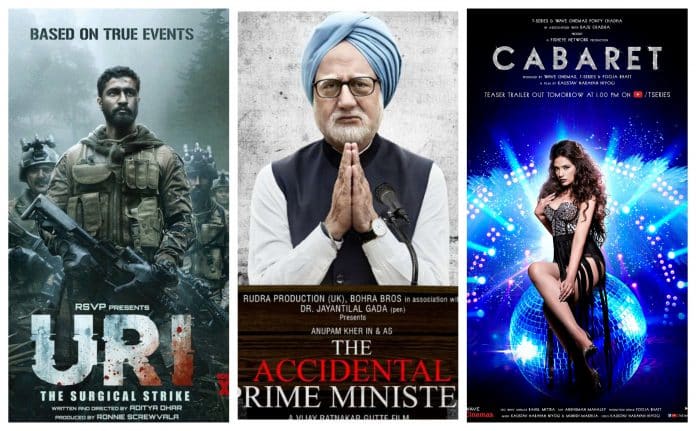 Wars often rage within the soldiers’ hearts, specially when they belong to army families. In one of this significant war film’s highpoints, Major Vihaan Singh Shergill, played by the self-effacing Vicky Kaushal, gathers his troop together somewhere in Kashmir before striking surgically in the country next door (okay, Pakistan. There. I said it).
These are soldiers who have lost loved ones in terror attacks, and their blood boils.
Uri brings the blood of cross-border tension to a boil but avoids a spill-over. There is a rush of patriotic pride in the product – and why should there not be? – but it is reined-in, curbed and never allowed to spill over in a gush of irrepressible jingoism. If you want to see soldiers dancing around a bonfire singing about how much they love their country and how much miss their loved ones, then you’ve got the wrong war film.
Yes, these soldiers love their country. But family comes first. And when Vihaan’s brother-in-law (Mohit Raina, making a striking big-screen debut) is killed in a vivid recreation of that real-life murderous attack at the Uri army base, Vihaan channels his personal loss to seek revenge on behalf of the country. It may not be the most patriotic of purposes. But it gives a certain disingenuous credibility to the mission.
All through its roomy yet tightly-wound running-time Uri confidently gives us people and situations from that golden chapter in BJP’s existence when India voluntarily forefeited the politics of pacifism to take on the enemy headlong.
The narrative is stylish and the political figures, from a dapper Narendra Modi (played with a refreshing absence of mimicry by Rajit Kapoor) to a droll Rakesh Bedi (playing a belching Pakistani politician), are all people whom we instantly recognise, not only by the way they look and talk but by their propensity to push the narrative into top gear without toppling the narrative into an excessively zealous jingoism.
While the actors playing Indian soldiers are uniformly (pun intended) credible, the film’s technical polish may come as bit of a surprise to those of us who have resigned ourselves to substandard VFX in our cinema.
Uri is shot with astounding finesse by cinematographer Mitesh Mirchandani. Every frame is a thoughtful recreation of the moment in time when in 2016, Indian soldiers pushed their way into Pakistan-occupied Kashmir to seek revenge. There is no pitching for effect. The drama and the fury flow organically.
Revenge served cold is said to be effective. Writer-director Aditya Dhar serves it up piping hot. The locations and the gunfire exchanges are perhaps the best we’ve seen in Indian cinema. The sound-design and background score capture the pain of lost human lives without bleeding out a banshee of road signs for our emotional responses. The tone of narration avoids overstatement. Dhar avoids the temptation of self-congratulation. Barring a dialogue like Ghar mein ghus ke marunga which doesn’t really belong to this film of graceful comeuppance, there is little chest-thumping here.
The performances add considerable weight to the drama. While Kaushal surrenders to his character’s conflicts without intellectualising them, I must make a special mention of the underused Kirti Kulhari who plays a small enigmatic part as the daughter of a disgraced army officer waiting to redeem her family pride – almost like the war genre in Indian cinema that had gone from Chetan Anand’s Haqeeqat and J.P. Dutta’s Border to Dutta’s Paltan.
Uri is a work of many achievements. But to me, a film about national pride without a single shot of the Indian flag is the biggest miracle since the invention of the motion-picture camera. This is a glorious beginning to 2019. And if patriotism is the flavour of the year, bring it on, provided it’s not about Paki-bashing. Just getting even.

If you enjoy political satires, The Accidental Prime Minister may not be the film that its makers would recommend for you. Outwardly, the intent and purpose of this fiercely political parable is to give us the “real” picture of former Prime Minister Manmohan Singh’s parent party and how it manipulated him into fronting their dynastic designs.

And how much more real can it get than Anupam Kher as Mr. Singh? The beard, the turban, the soft hushed barely audible voice (make sure you get your seats in a Dolby equipped theatre)… Anupam gets the externals so right that we scarcely care about what lies beneath.
And what lies! If we are to believe this film, then Manmohan Singh was a ‘baba’ in the woods, an angel in disguise, a scholar and academic thrown into the cesspit of politics, manipulated into supporting the Congress monarchy by a scheming mother-son pair. And we all know who they are.
There is nothing accidental about The Accidental Prime Minister. The not-so-hidden agenda is to show Sonia Gandhi and her two children in the worst light possible. And it can’t get any worse than Suzanne Bernert as Sonia Gandhi. Suzanne arches her eyebrows so sharply, I feared for her facial well-being.
Every actor cast as real-life politicians has been given a clear brief to look as much as the real-life politician as possible. The line between acting and mimicry is invisible in the politics that underlines this political charade. In the theatre, I heard delighted exclamations of recognition, the kind we hear when a stand-up comedian does an Amitabh Bachchan or a Shatrughan Sinha on stage.
If you want to play spot-the-politician, this film is huge fun. My top prize for the most enjoyable mimicry goes to the talented Arjun Mathur and Aahana Kumra as Rahul and Priyanka Gandhi. If ever the real Gandhi siblings need duplicates while they holiday abroad, they know where to go.
The only actor not doing an impersonation is Akshaye Khanna. Playing Sanjaya Baru, Akshaye brings to the proceedings a gravitas that this film doesn’t need or deserve. He is like that one honest bureaucrat in an office filled with bribe takers. But he has his uses.
Akshaye and Anupam anchor the plot (and I am not talking about just the screenplay but the plot that underlines the raison d’etre of this film). Their exchanges exhibit sparks of unexpected irony and intelligence, as if two actors recognise the potential in each other, knowing fully well their collective wisdom is unsupported by anything else around them.
Both these actors make the hullabaloo over Singh and the Gandhis look more tenable than it would have without them.
The Accidental Prime Minister works well as a pantomime of power politics. Beyond that, we will have to wait for another day, another time, another regime.

Do you remember those gorgeous, sizzling cabaret numbers by Helen in the films of the 1970s? Yes? And do you remember the 1972 Liza Minnelli classic titled Cabaret for which the actress won an Oscar?

Okay. Now erase the memories of Helen and Minnelli. Chances are, after seeing Cabaret, you’ll never want look at another cabaret number. Come to think of it, it would be hard for you to go to the next Richa Chadha film without a shudder of apprehension.
This one drags you down to the dungeons of despair. Windowless and dingy.
Cabaret opens with brutish policeman in Jharkhand gunning down a woman’s husband and then asking her bluntly for sexual favours. Vipin Sachdeva, who plays the policeman, doesn’t keep it subtle. Why should he, when everything around him screams for attention.
The woman, Razia alias Rose played by Richa, flees to Dubai after gunning down the policeman where in no time at all, we see her dancing to a ruinously subversive remix of Pankaj Udhas’ Mohe aaye na jag ki laaj.
Come again? Is this a cabaret? If it is, then Helen is suing. And what is that Richa is wearing? It looks like a corset tied to the ropes that are used to pull cows towards their sheds. Nope. Richa clearly can’t dance. But that’s okay. No one in this dolorously, dreadful and doomed drama does anything that can be called remotely cinematic.
The songs that once used to be the Bhatts forte (yes, a prominent Bhatt, Pooja, is associated with this, and we forgive her) here sound like out-takes from a lengthy musical session with an “Indian Idol” contestant.
Sreesanth plays a good-hearted don, and Razia/Rosy’s benefactor who runs what looks like a club for grieving women — an acid-attack victim, a gangrape victim, and so on. By the time Richa finishes her tour of Sreesanth’s philanthropic work, she is ready to join the ‘Sree-fam’. That’s what they call Sreesanth’s fans. But honestly, if he insists on… er… acting in such films, the ‘fam’ may be reduced to a famine soon.
However, Sreesanth is not the film’s leading man. The not-untalented Gulshan Devaiah is. He plays an alcoholic “investigative journalist” who spends most of his time investigating the heroine’s anatomy.
As I watched the actors plod through the plot, I wondered how they kept a straight face pretending this film was actually serious business.
Cabaret is a comedy masquerading as a drama of a doomed damsel’s distressful adventures. Even the lovemaking scenes are a howl. In one of these, Richa climbs on Gulshan Grover as he groans more in a ‘oh-no’ rather than a ‘ah-yes’ sort of way. Then she grabs a bottle and smashes it on his head.
Lovemaking techniques are getting dangerously violent these days.
If you have a couple of hours to spare, please use it for more rewarding activities than watching Cabaret.