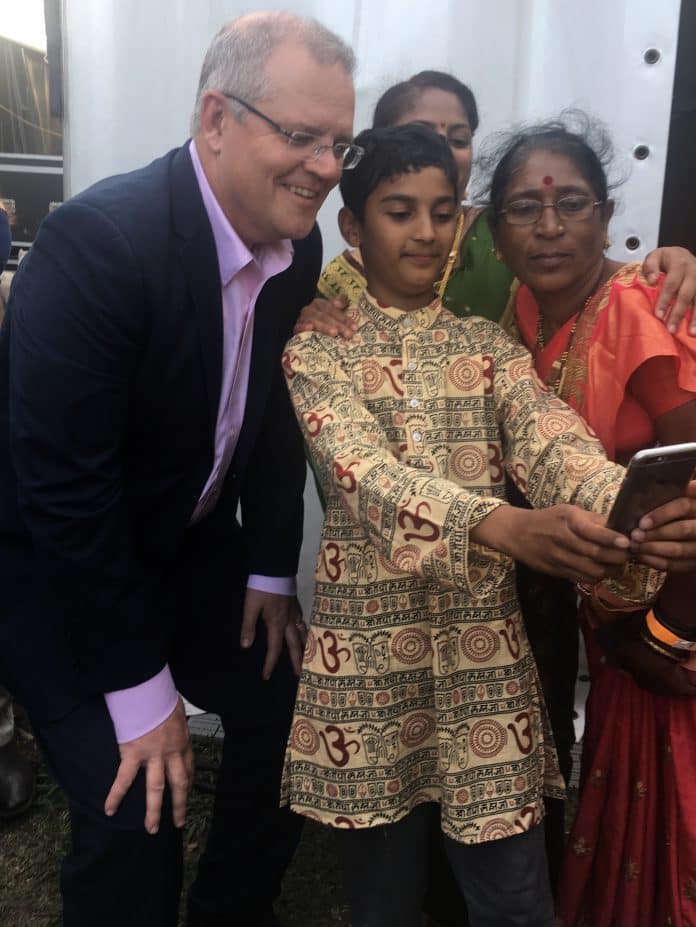 Reading Time: 3 minutesHindu Council’s 20th Diwali Mela
Over time things can only get bigger, and Hindu Council of Australia’s festivities around Diwali are eagerly awaited by the Indian Australian community. As in the world of media, where people now expect information to be sent to them on their smart phones rather than to walk to the newsagent and get their newspapers, Hindu Council also has taken Diwali to the suburbs in addition to their central mega mela in Parramatta. This year Diwali festivities organised by Hindu Council were held in Rouse Hill, Cherrybrook, Martin Place in the city besides the main event, which stretched to two days in Parramatta. As with all things which are put together by dedicated volunteers, things do tend to slip through the cracks and this year was no exception. The important thing of course is to learn from these so that in future years, Hindu Council Diwali celebrations can only get brighter and better.

Martin Place in the city is an iconic venue and an opportunity to influence the many office workers around the CBD on the tenets of Hinduism and more importantly, the values of multiculturalism in our society today. The stage is an important focal point for the city-based celebrations, but sadly this year, the quality of the stage shows left much to be desired. They failed to garner much attention from the many office workers out on their lunch break. The crowds thronging around were largely the Indian Australian community enjoying their little bit of India in the CBD. What would have been more rewarding is sharing the spirit of Diwali who are unaware of this major Indian Festival.
In 1998, the first Diwali Mela by Hindu Council was held at Fairfield Showgrounds, the tin roof protecting the 4,000-odd community members from the pouring rain. Twenty years on, the organisers need part of the 85 hectares of Parramatta Park to accommodate the few thousand that throng in to enjoy Diwali. To minimise their financial risk, Hindu Council introduced an entry fee of $6 from last year, which largely the community seems comfortable with. Perhaps it was the heat at this time of the year which kept the crowds down during the day, with a rush later on in the evenings, more so on the Sunday night when the effigy of Ravana was burned and fireworks lit up the Parramatta sky.
With both State and Federal elections in the pipeline over the next twelve months, it was a conga line of politicians at the Fair. Prime Minister Scott Morrison joined the community to celebrate Diwali, and it was wonderful to see was wife Jenny Morrison in a beautiful pink sari (one of three she owns, apparently) and their two children keen to enjoy the Bollywood dances. But the organisers ad other things on their mind with a stage full of VIPs and speeches from the Prime Minister, NSW Premier Gladys Berejklian, Federal Memers David Coleman and Julian Leeser, Shadow Deputy Prime Minister Tanya Plibersek, NSW Ministers Ray Williams and Geoff Lee, Shadow Ministers Jodi McKay, Jihad Dib, various officials of Hindu council, Indian CG Vanlalvawna, overseas guests, Parramatta Park trust officials, sponsors and then over 20 recognitions and honours – even the Prime Minister could not stay to the end.
As the sun set, the food stalls were doing roaring business as families with prams and elderly parents just grabbed any spot on the ground to enjoy their dinner, while business stalls desperately went looking for clients. In the end, it was Diwali as always: food and fun with friends and family. Hindu Council, mission accomplished.
See pictures from other celebrations/melas across Sydney
CIA’s Little India Fair
FIAN Diwali mela
Blacktown Diwali mela
AHIA Diwali
Deepavali Milan
South Sydney Diwali bash
Deepavali at Church