The anthology is entertaining and worth a watch, writes VINAYAK CHAKRAVORTY. 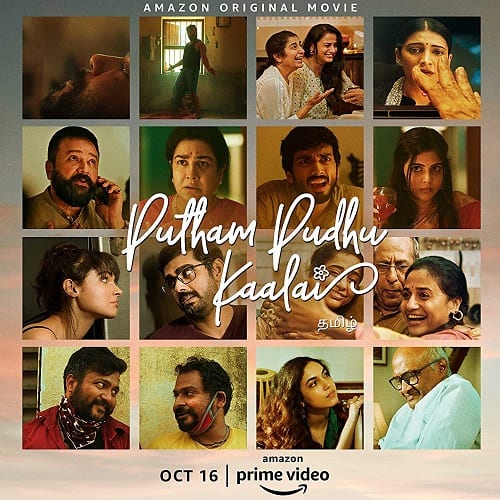 Putham Pudhu Kaalai (translates to A New Dawn) is a collaboration between five well-known filmmakers down South who have directed one story each in this episodic film. They do not have any link with each other except the fact that all five are set against the backdrop of lockdown. Overall, the idea obviously was to make a feel-good commercial film that reaches out to the largest possible audience, drawing advantage of OTT’s burgeoning global reach, so none of the five stories probe any facet of human relation too deeply.

The first of five stories, Sudha Kongara’s Ilamai Idho Idho (Youth, Here We Come), sets a light mood. Francis Thomas and Shruti Ramachandran’s writing is evenly paced as the widower Rajeev (Jayaram) invites girlfriend Lakshmi (Urvashi) to stay with him for a few days. Twist in the tale comes when lockdown is suddenly announced even as Lakshmi is still at Rajeev’s place, and his daughter and son-in-law arrive. A not-too-heavy narrative scores primarily due to Kongara’s simplistic storytelling. The director uses a younger set of actors (Kalidas Jayaram and Kalyani Priyadarshan) to enact Rajeev and Lakshmi every time they feel young and romantic in each other’s company. The charming little rom-com is enriched by good acting and interesting use of music (GV Prakash).

Gautham Vasudev Menon directs Avarum Naanum (Him And Me), a story about a young girl (Ritu Varma) who comes to stay with her grandfather (MS Bhaskar) amid lockdown. The two have been estranged for years, and the story (Reshma Ghatala) moves along predictable lines to narrate how the girl discover her ‘thaata’ all over again, and misconceptions are cleared. Strictly, it is not a story that demanded the backdrop of lockdown, but the film is well shot (PC Sreeram) and the two protagonists share a few remarkable moments.

Anthology films have a dead giveaway. The placement of your film often becomes an indication of how appealing it is, compared to the others in the collection. In Putham Pudhu Kaalai, for instance, it doesn’t take much to realise the one placed bang in the middle could be the weakest link.

Suhasini Maniratnam’s Coffee, Anyone? would seem to face that disadvantage, although the film has been co-written by Suhasini along with her husband, the masterly Mani Ratnam. You find the odd Mani Ratnam trademark moment as two sisters (Anu Hasan and Suhasini) visit their mother, who lies in a coma. Much to the disapproval of the two women, their father (Kathadi Ramamurthy) has brought their mother home when hospital care would perhaps seem practical. The film tries to make a point about the power of love and familial bonds to heal, but ends on a rather contrived note. Also, you don’t spot any reason why this story should be set in the time of lockdown.

Andrea Jeremiah brings alive the fourth story, Reunion, directed by Rajiv Menon, who also co-writes along with Adhithya KR and Krishnaswamy Ramkumar, and functions as cinematographer. Vikram, an affluent surgeon (Gurucharan), lives with his mother (Leela Samson) and their life is about to be thrown in a turmoil when Sadhana (Andrea), a bar singer and an old friend of Vikram turns up. The young doctor returns from hospital to discover he has come in contact with a Covid patient, so he isolates himself in the house. With lockdown announced, Vikram’s mother suggests Sadhana stay with them, and the girl agrees.

Of course, there is a twist about Sadhana that pushes the plot. Menon uses music (Nivas K. Prasanna) to subtly define Sadhana’s past bond with Vikram, as well as take the story forward. Watching Reunion, it would seem like the story needed a longer runtime to come alive. Menon does adequately while narrating his tale in the short format, though he fails to add an impressive punch in the end.

Anthology films often reserve the best for the last, and this surely happens here. Writer-director Kartik Subbaraj’s Miracle is a winner all the way, a brilliant parting shot. A couple of smalltime goons (Bobby Simha and K. Muthu Kumar) are in dire need of money. Amidst lockdown chaos they figure out a crooked way to get their hand on a big stash. Of course, there is a catch in what happens next. Miracle is the sort of story you don’t want to reveal much, except that it is smart, funny and ironic. Shreyaas Krishna’s camera makes interesting use of bright hues and darkness to bring alive various phases of the tale, and the film is deftly cut by Vivek Harshan.

No matter how you react to the rest of the stories, Miracle is guaranteed to leave you in a merry mood.

Putham Pudhu Kaalai manages to entertain within the limitation and challenges of the short film format. Although not an outstanding effort, the film overall is an entertaining, and certainly worth one watch.