An interview with David Wenham, star of the new Paul Cox film Force of Destiny. 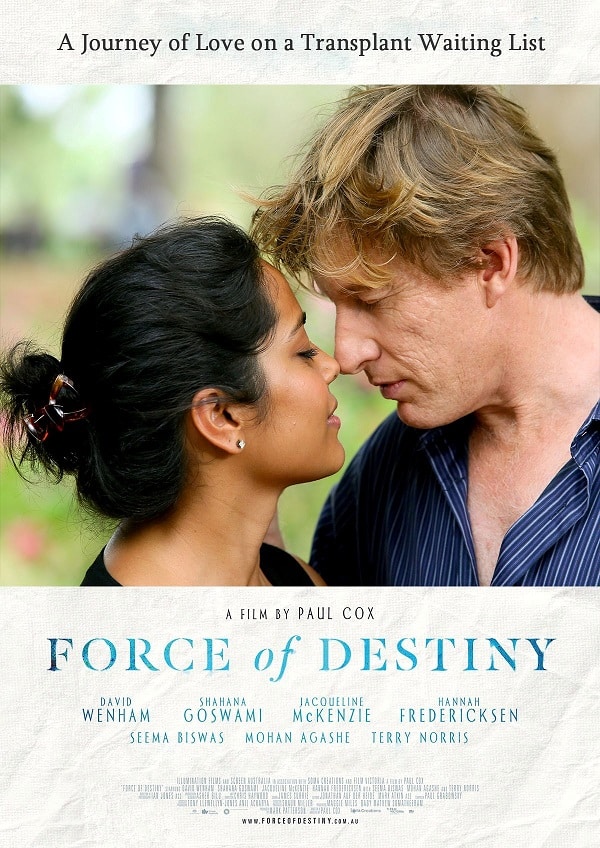 The recently concluded Melbourne International Film Festival (MIFF) launched its 2015 program with a special screening of Australian film maker Paul Cox’s latest film Force of Destiny. Based on the personal experiences of the legendary auteur, Force of Destiny (FOD) is a poignant story about getting a second chance in life.

Starring Australian actor David Wenham and Indian actress Shahana Goswami, FOD is a romantic, visually engaging and moving account of a sculptor who is diagnosed with liver cancer and placed on a waiting list for a liver transplant. During the most turbulent phase of his life he finds love and solace in the arms of a beautiful Indian marine biologist.
Amidst contemplations of mortality and the hide and seek with love and life Force of Destiny conveys a timely message about the importance of organ donation.

Shot in India and Melbourne, the film also features veteran Indian actors Seema Biswas and Mohan Agashe along with Jacqueline McKenzie, Terry Norris and Hannah Frederickson.
Indian Link caught up with actors Shahana Goswami and David Wenham who were in Melbourne recently to promote the film and attend the red carpet opening gala at MIFF.

The internationally famed actor from Marrickville, Sydney is known for his role as Diver Dan in the ABC television series SeaChange, Faramir in The Lord Of The Rings and Neil Fletcher in Australia.

Over the span of his more than 30 year career in the film industry, Wenham has been called the sexiest man alive in Australia and won respect as a multifaceted actor. He was also the source of inspiration for the Archibald-winning portrait by artist David Cullen.

Wenham recently joined Geoffrey Rush, Toni Collette, Dawn Fraser, Ray Martin and other celebrities to appear in the new season of Who Do You Think You Are? on SBS. He has previously worked with Paul Cox in the lead role of the film Molokai: The Story of Father Damien.

Sporting a ribbed, collared jumper, in person David Wenham looked far younger than the character he plays in FOD, Robert. Smiling, friendly and full of chutzpah, the conversation with him was smooth and easy flowing as he provided an insight into his FOD journey.

PJ: What was it like working with Paul Cox again?
DW: FOD is a project inspired by Paul Cox’s personal experience and it was my privilege to be involved in the film because I know how much it meant to him.

Paul was adamant that he wants to make this film because of what he went through as he realised the importance of organ donation. Australia has one of the lowest rates of organ donation in the world.

In the hospital where Paul had his surgery performed, there are 1600 people on the waiting list and many will die before they receive an organ transplant. This was a huge motivating factor in making this film for Paul and I was right behind him in supporting that.

PJ: With this being so close to Paul’s own story, was it daunting to try to capture the essence of Robert’s character?
DW: I don’t think daunting so much but I was aware of the responsibility of portraying the character for Paul. Everybody involved in the film was there for Paul as he is a much-loved figure within the Australian film community.

I was very fortunate to have some great resource material in the book that Paul wrote on his experiences called Tales from a Cancer Ward. Having him as the director of the film and a wonderful mentor helped.

PJ: Tell us about your experience of working with Shahana Goswami?
DW: It was absolutely delightful to work with her. Paul cast Shahana without having ever met her. Her name was recommended for the film by one of Paul’s numerous contacts in India. Paul decided to cast her after a few exchange of emails and communication through Skype, that Paul got to use for the first time. He was convinced Shahana was the right person to portray the role of Maya.

When she came to Australia we got on instantly, there was a great connection, we share a wonderful sense of humour and we have become very firm friends through the film. 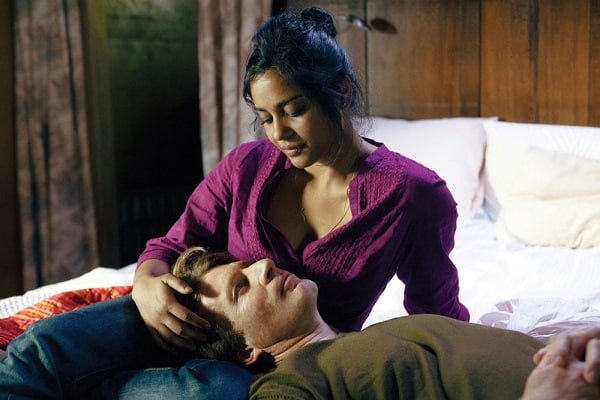 PJ: Tell us about your trip to India for the film shoots?
DW: This was my first trip to India and it was a wonderful introduction to the incredible region of Thiruvananthapuram in Kerala, in the south of India.

We enjoyed the generous hospitality of film producer Baby Matthew. We stayed in one of his Ayurveda Resorts, which was terrific. I loved the hospitality of the Indian people, adored the food and I had an amazing experience.

Strangely I had never been to India before and suddenly within months of doing this film I ended up getting two more films with an Indian connection and ended up returning again. I have already shot two films, one of them in the other end of the country in Ladakh.

PJ: Can you tell us a bit more about these upcoming projects with Indian links?
DW: One of them is called Beyond the Known World directed by Indian director Pan Nalin. It is a story of a couple that goes looking for their daughter in the Himalayas. The other one is called Lion and is based on a true story of Saroo Brierley, who got lost in an Indian train station, was taken to an orphanage and ended up being adopted by an Australian family. Eventually, after 20 years, he manages to find his birth mother by recollecting geographical elements and searching on Google earth. Dev Patel from Slumdog Millionaire fame plays the older Saroo. It’s due for release next year.

I loved that the sound in Bollywood films is almost twice as loud as any other film industry in the world, making it a truly visceral experience. I love the audience reaction that is so complete and honest, it’s like a celebration every time one goes to see those films; I thought they were fantastic.

PJ: What about Australian film industry, where do you think we are heading?
DW: In Australia we have always punched above our weight. We are a small country and we only produce a handful of films every year. Over the years, however, Australia has produced some amazingly creative talent that has gone and carved their niche in the world, which is wonderful.

My only criticism of our industry is that we need to push our boundaries more creatively. Some of our films are too safe and too generic, and they are films that do not particularly interest me. Some people think they have a market but I don’t.

PJ: What has been your toughest role so far? Which one has posed the most challenges?
DW: I did a film called 300 that required someone extremely big and extremely fit and I don’t know why they cast me in that role, as I was neither of those. I actually worried, every day that they were going to sack me.
We went through a period of five months training for that role and that was the toughest physical thing I have ever done in my life, but it was also one of the most rewarding films.

PJ: I believe you’re hoping to be cast in a comic role for a change, have you found such an opportunity yet?
DW: No, there is nothing of that sort in the pipeline. I desperately need to do a comedy role and if any of your Indian readers have a comic role suitable for me then they should certainly tell me.

PJ: You were part of the Cinefest Oz Film Prize jury recently. How does it feel to be judging instead of being judged?
DW: The best thing about being part of a film festival jury is the fact that I actually get to watch some films. Most of the time, when I go to these festivals as an actor promoting a film, I never get a chance to watch other films.

PJ: What message would you like people to take with them after watching FOD?
DW: I would hate to be prescriptive and I believe people can take whatever message they wish to take home with them.
FOD is a gentle, beautiful and moving film and people watching it can’t help but think about mortality. Hopefully, on a broader spectrum, it makes people think about organ donation, which people don’t think about on a daily basis.

PJ: Have you signed up to be an organ donor?
DW: I have always been listed as an organ donor on my license, but I’m yet to sign the certified legal document to say that I’m an organ donor. This is now required as just having it listed on the license is not enough.

To give you an example, if I die and one of my family members decides to overturn that decision then I am not an organ donor. The license endorsement is not effective in that scenario.

It would be better if we could have the ‘opt out’ version used in countries like Spain and Netherlands where everyone is an organ donor by default unless they opt out officially.
This would capture far more people and would be more effective as there would be no need to have it listed meaninglessly on the license, nor have legal documents or go through or the hassle of looking for those documents when required. I think it will be much simpler if everyone is on the same page.