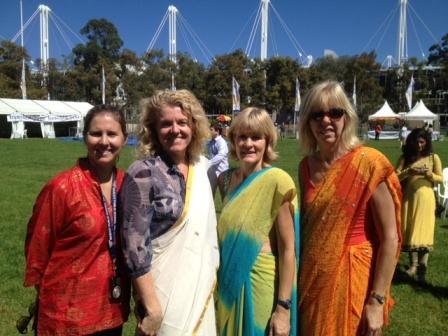 In a unique initiative, five schools in NSW are a part of ‘India Calling’, an educational programme organized in coordination with the NSW Department of Education and Training’s ‘Expanding Horizons with Asia initiative’. The objective of this educational programme is to develop an understanding of India and an insight into the Hindi language. Face-to-face lessons by a specialist teacher and video conferencing technology connect 520 students in Year 3 and 4 across participating schools.

School children are encouraged to learn respect for each other’s cultures, customs and religions and students from the schools meet on significant days in the Indian calendar to participate in cultural activities.

Recently, students from the participating schools celebrated Harmony Day via video conferencing on March 21, and Holi, the festival of colours on March 23.

The event began with all five schools singing the peace song to signify the importance of Harmony Day. Kamahl then sang One hundred children and spoke briefly on the importance of living in harmony. The guests then donned special ‘India Calling’ aprons, in keeping with the theme of Indian food on Harmony Day. A demonstration on how idlis were made was well-received by students and guests alike.

Kulwinder, a Hindi teacher for ‘India Calling’ and Mala Mehta, founder and teacher of IABBV, began the interactive cooking session with a powerpoint presentation, also naming some of the vegetables and fruits.

The students were made into sabziwallas and sabziwalis, phalwalas and phalwalis, and moved around selling their fruit and vegetables to all present. Kulwinder went through the process of preparing Aloo sabzi and pooris, followed by a display of Indian cooking utensils and their uses, conducted by Mala.

Everyone then got up to dance to Jai Ho and Nachle with Purvi Didi and worked up an appetite for lunch. After presenting Kamahl, Dr Lambert and Mrs Elizabeth Maher, Principal of Carlton South with thank you gifts, the video conferencing ended with a big Namaste and Dhanyavaad to all present. The students from Carlton South then enjoyed their Indian lunch.

Students from Mascot Public School and Cronulla Public School enjoyed a day out at the Holi Mahotsav in Darling Harbour organised by Bhartiya Vidya Bhavan, Australia.

Over a hundred students accompanied by their teachers arrived at the venue and changed into their costumes, supervised by teachers and volunteers of IABBV Hindi School.

After the welcome address and the Australia and Indian national anthems, a special Gandhi Dandi March was enacted by 29 students of Cronulla Public School, which included a reading of this historic event.

The peace song, Hum honge kamyab was sung by all students, followed by a rendition of Where the mind is without fear, the famous speech by Rabindranath Tagore.

But the highlight of the event was the Indian costume display fashion parade, in which the students showcased different traditional outfits from around India. The students were dressed in Punjabi lungi kurtas with pagris, while the girls wore colourful salwar khameez sets; Rajasthani outfits were displayed through lehengas, with the Maharashtrian set wearing white kurtas and Gandhi topis. Stunning Indian sarees were also displayed by the female teachers, with their male counterparts looking dashing in their pagris and odhnis.

A touch of Bollywood is a must at any Indian event, so it wasn’t long before everyone present began gyrating to Dance nachle and Jai ho. The audience joined in enthusiastically to the dholna folk dance and Zoobi Doobi, choreographed and led by Purvi Desai. The students and teachers then enjoyed free vouchers for their choice of Indian food, courtesy of Bhavan Australia. Some of them were even seen opting to buy fresh coconut water as opposed to soft drinks.

A Rangoli Art and Henna Art workshop conducted by volunteers of IABBV Hindi School was well received, and a display of artwork from 2011 ‘India Calling’ was visited by the interested audience. The event was a success, with the students enjoying the colour and festivity of Holi Mahotsav. 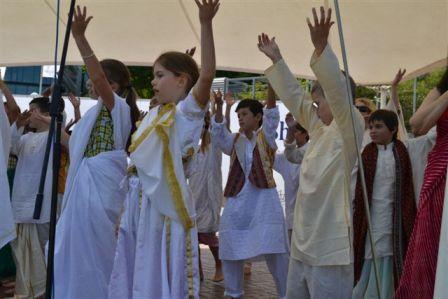 ‘India Calling’ is a part of the Sydney Region of the NSW Department of Education and Training’s “Expanding Horizons with Asia initiative”, which began in 2008 and involves approximately 12,000 students. In NSW, 520 students in Year 3 and 4 across five participating schools enjoy the benefits of learning more about India and its culture, as well as the Hindi language, connecting to their fellow students and teachers via video conferencing. Later in the year, the participating schools will be linked with sister schools in India.

Kerala: Bringing God’s Own Country back