For Dr Edward Narayan, Senior Lecturer of Animal Science at Western Sydney University, the seed of interest had been sowed when he was young. But not even the 35-year-old could have predicted the trajectory his passion for animals would take him on – towards koalas.

Edward, who leads the Stress Lab at the Uni’s Hawkesbury Campus, has been in the news recently for his ground-breaking study on physiological stress in wild rescued koalas. Simply put, Edward and his team proved that the psychological state of wild koalas and the location they are rescued from, can have significant impacts on their chances of recovery and rehabilitation.

This study, the first of its kind in the world, assessed stress levels from faeces samples rather than blood samples, and paved the way for a non-invasive technique of analysing hormones. 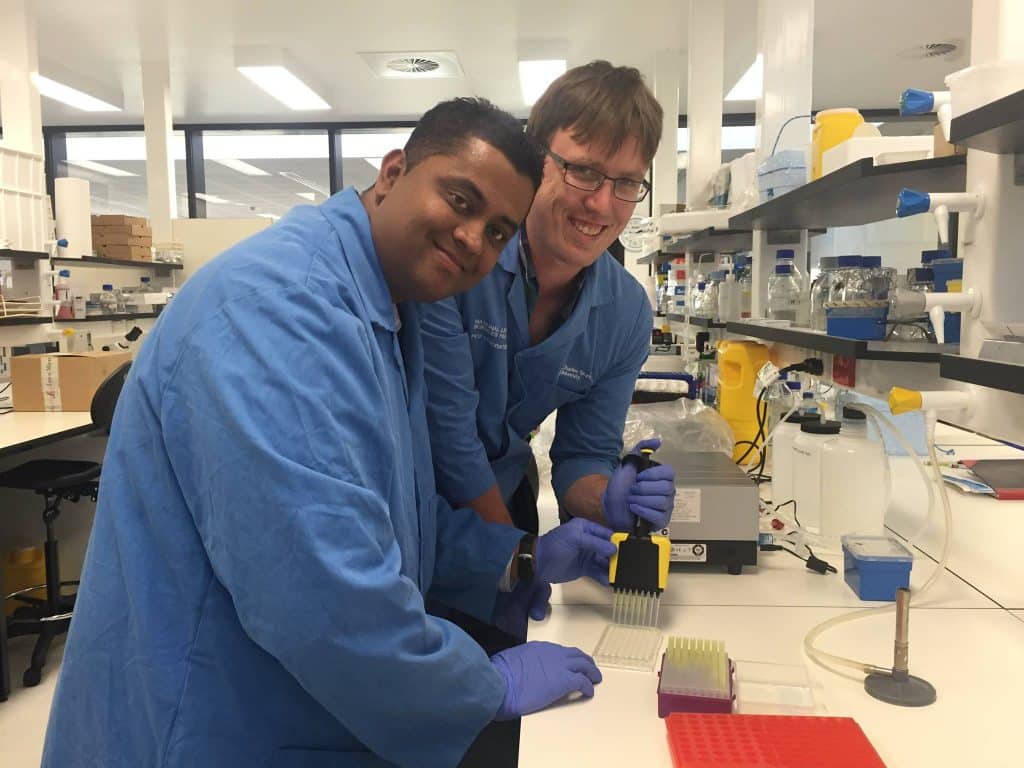 But the journey to making this notable discovery was a long and challenging one. “As a student in Fiji, I got a scholarship for a PhD in Biology at the University of South Pacific. I studied a rare, highly endangered frog species,” Edward tells Indian Link. “I used to travel to the Pacific Islands once a month on a boat and spend a night studying the frogs, their eggs and their physiology. My mother used to pack a tiffin for the islanders, the indigenous people there.”

The existing methodology to assess hormone levels involved drawing blood samples. This was cumbersome as well as stressful for the animal.

“When you hold down animals to draw blood, it can be very traumatic for them,” Edward describes. “As a result, it’s impossible to get a clean blood sample. That’s where my research first came in handy – I found a way to use urine samples.”

Word spread about his non-invasive method of analysing hormones in animals and Edward was asked to speak at events and conferences. At one such conference in Perth in 2009, he was invited by the director of Griffith University, Queensland to apply for a Vice-Chancellor’s postdoctoral fellowship. He followed it up with extensive postdoctoral research fellowship training in institutions in four countries – New Zealand, Australia, India and Canada. 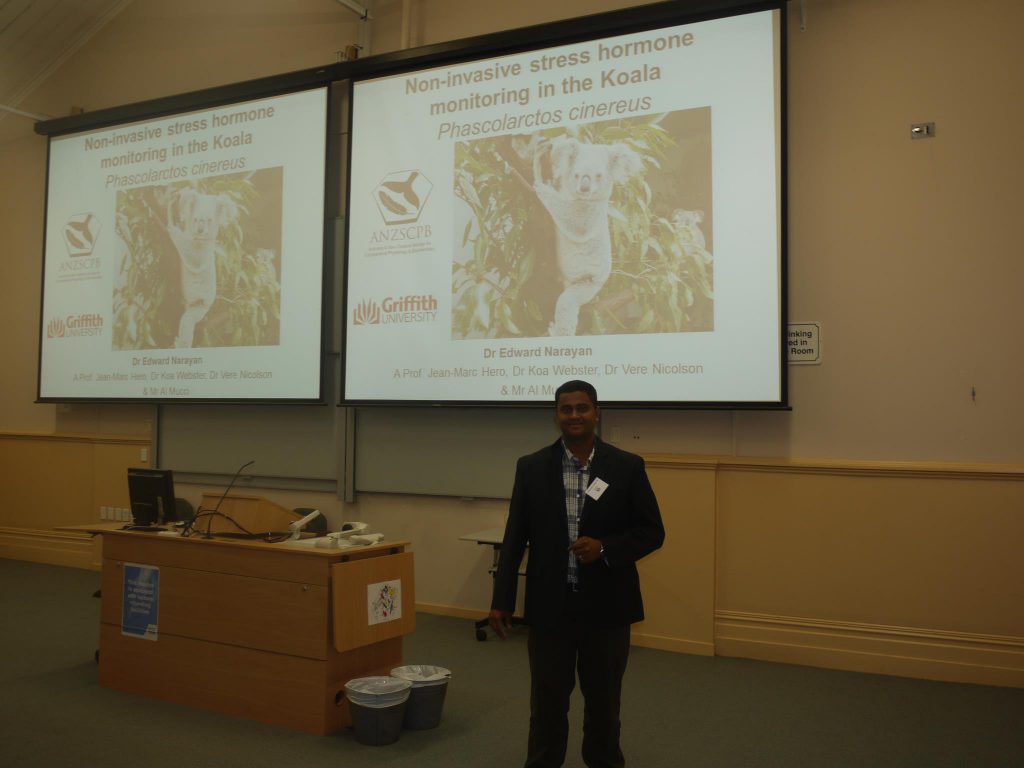 A chance meeting with Al Mucci, director of Dreamworld Wildlife Foundation, led to the current koala study, explains Edward. “It’s easy to get faeces samples in koalas. You process the samples in the lab and note down the readings. Our group was the first in the world do this. From there on, I went on to study the bilby, tree kangaroos.”

On why he started with koalas, he says, “I have always loved koalas. Koalas are to Australia what the Opera House is to Sydney. How would it feel not to have either?”

Edward’s study is the first in the world to conclusively prove that land clearance is directly related to stress in koalas. “We hardly find animals in the city, but they’ve been adjusting to humans since the beginning of time. Wild animals are aware of humans, and by living around humans they’re learning to coexist with us. It’s important to provide them with green landscapes that can allow this coexistence to flourish. The study is an indicator that animals are showing signs of resilience to change, but we need to help them adapt.”

He adds, “There are corridors through which these animals have started entering the city limits. Human-induced environmental changes in rural areas are also causing this shift – you’ve got mining, deforestation, industrialisation, agriculture. Koalas are one of the most resilient animals in this country with physiological adaptations that are astounding.” 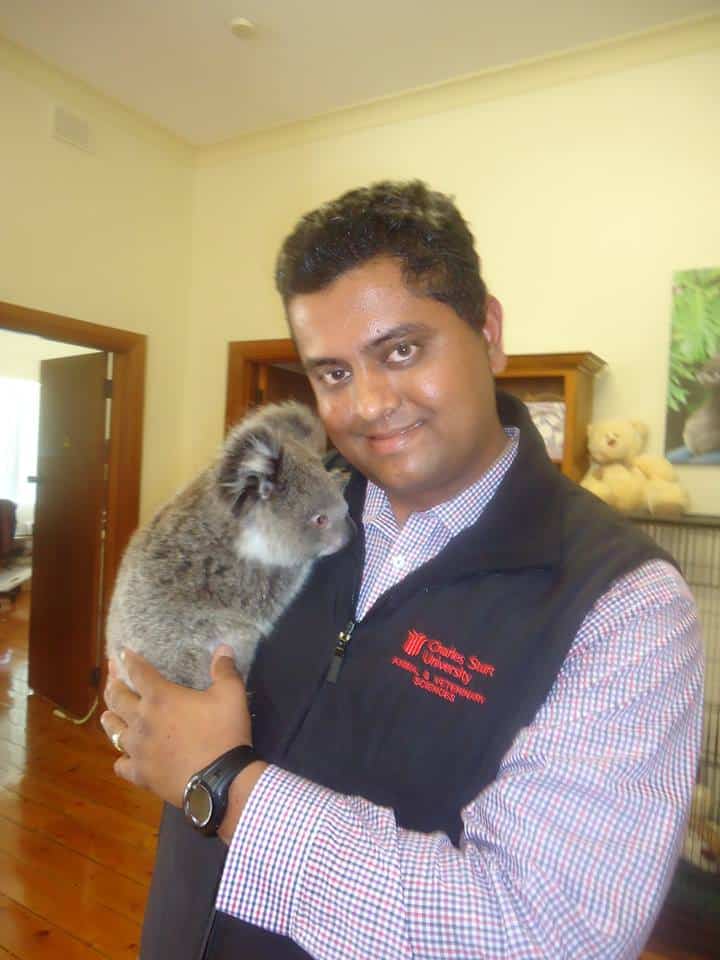 As for the effect it has had, Edward says, “I can’t believe how much this research study has added to the debate. People came up to me, called and emailed me to ask, ‘You can really measure hormones through koala’s faeces?’”

And what about action from the decision makers, the policy enforcers? “Good urban planning is the answer. We’ve touched the nerve of the problem. The science has provided the first evidence and has kickstarted positive dialogue. Policy change won’t happen overnight.”

With his work currently supported by one of the world’s leading conservation organisations, International Fund for Animal Welfare, Edward has been talking about this issue on bigger platforms.

Next on his agenda is increased engagement in India, the land form where his grandparents migrated to Fiji. “I’ve applied for a research grant in partnership with Cochin Institute of Technology in Kerala. We’re trying to gain a deeper understanding of the effect of marine pollution on stress in marine life in the coastal areas of NSW and India. Western Sydney University has signed an MoU with Kerala Agricultural Uni. It’s exciting because I’m playing a part in increasing the collaboration between Australia and India.”