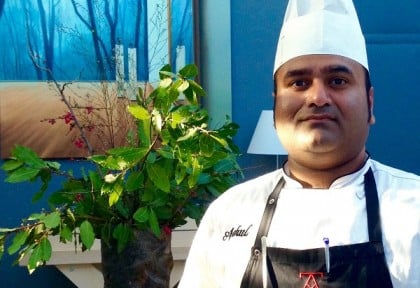 The past decade has revolutionised the way we approach food. Instead of being seen as just fuel for the body, today food is a multisensory gastronomic affair. And there are chefs like Anshul Chandna pushing the boundaries, keen to understand more about the relationships we have with food.
Chandna is currently honing his culinary skills at Azurmendi Gastronomique in Larrabetzu, Spain. With three Michelin stars and the titles of Europe’s No. 1 Restaurant and 16th Best Restaurant in the World for 2016, Chandna says this opportunity is indeed a dream come true.


The role at Azurmendi is a highly exciting and challenging one that came about after Chanda’s participation in ‘Brainy Tongue’. Led by some of the world’s most renowned chefs, including Andoni Luis Aduriz (Mugaritz; World No.7 Restaurant), Eneko Atxa (Azurmendi) and Heston Blumenthal (Fat Duck), the Brainy Tongue project is a means of exploring the field of sensory awareness through science and cooking.
The first activity promoted by Brainy Tongue was the workshop The Sensory Logic of the Gastronomic Brain, held from 24 to 26 October, in the Basque Culinary Center. Chandna was thrilled to explore the conceptual knowledge and understanding of food perception, through interactive seminars and experiments before taking up the incredible opportunity in the Azurmendi kitchen.
“My role here is termed as Chef without any hierarchal tag,” Chandna says. “It is solely for gaining insight into every operational aspect of one of the best restaurants in the world. Currently I am exploring Entremetier production.” (The Entremetier cook is responsible for preparing hot appetisers, soups, and vegetables dishes.)
A native of Meerut in Uttar Pradesh, India, Chandna’s first steps towards a culinary career began with Taj Hotels in 2002 after completing a Diploma in Hospitality from the Institute of Hotel Management (Bhopal).

Being a restless creative soul, Anshul was constantly looking for opportunities to broaden his skillset and knowledge about the culinary world. He moved to the UK, where he worked at restaurants like the Thistle Hotel in St. Albans and the Marriott Hotel in Essex, before taking up a job as a Junior Sous Chef at the Westin Resort in California, USA.
In 2007, Chandna moved to Sydney in an inter-company transfer which saw him become the Sous Chef at the Westin Sydney Hotel in Martin Place.
“After four years of some high end work there, I moved to Canberra in late 2010 as Head Chef at the National Gallery of Australia, where I opened a new function centre (Gandel Hall) that served degustations and high end menus to 350 diners each day,” Chandna says. “There I served many visiting Heads of State, as well as Australian parliamentarians. This was the biggest confidence booster in my career and enabled me to build a strong network amongst leading industry professionals, celebrated chefs and food critics.”
Chandna then moved to the role of Executive Chef at Australian National University in Canberra, where he stayed until October, 2016 before his stint at Azurmendi started.

“I had the opportunity to collaborate with many eminent culinary professionals in an effort to create goodwill for ANU’s food and beverage operations,” he says. “I started a series dubbed ‘Meet the Chef’ which was immensely successful. During my time there we catered events with James Viles (Biota), Stephanie Alexander, Silvia Colloca, Paul West (River Cottage), Annabel Crabb, Matthew Evans (Gourmet Farmer) Adam Liaw, and Justine Schofield (Masterchef). One of my most memorable experiences was working with James Viles and cooking live liquid nitrogen desserts (called Winter Mum’s Roses) which turned out to be a huge hit with our diners.”
Chandna says that he has always been interested in the culinary arts. Though his training has been in classical French and Italian cuisines, he has dabbled with many others like Mexican and Modern Australian. His signature style would be modern fusion especially with the influences of his Indian heritage.
After his time at Azurmendi finishes at the end of the 2017 season, Chandna hopes to return to Canberra and plans on starting his own venture which he is rather excited about.
“The project will focus on extraordinary food experiences for diners where the senses will create a long lasting memory,” Chandna explains. “It will be based on fusion of my knowledge of molecular gastronomy, Indian cuisine and my insights into European and Mediterranean cuisines gained through what guests have liked in my 10 years of cooking in Australia.”

Chandna agrees that Indian cuisine is still at a nascent stage in Australia and he hopes to change that perception through his culinary journey which will showcase the multicultural vastness of Indian cuisine. A big lover of Asian food in general (which of course includes Indian), his favourite is his own signature dish – a lentil consommé with shredded Peking duck and scallions.
Chandna attributes his success to “my beautiful wife, Shweta, without whose relentless support, none of it would have happened”.
And to the young guns entering the hospitality industry, Anshul Chandna has just one piece of advice, “Know yourself and what drives you the most; a career must be born out of passion and not compromise.”
- Advertisement -
Share
WhatsApp
Facebook
Twitter
Linkedin
Previous articleSpicy Sunday roast
Next articleGive them wings

It’s a wrap: 4 delicious recipes to fuel your summer days