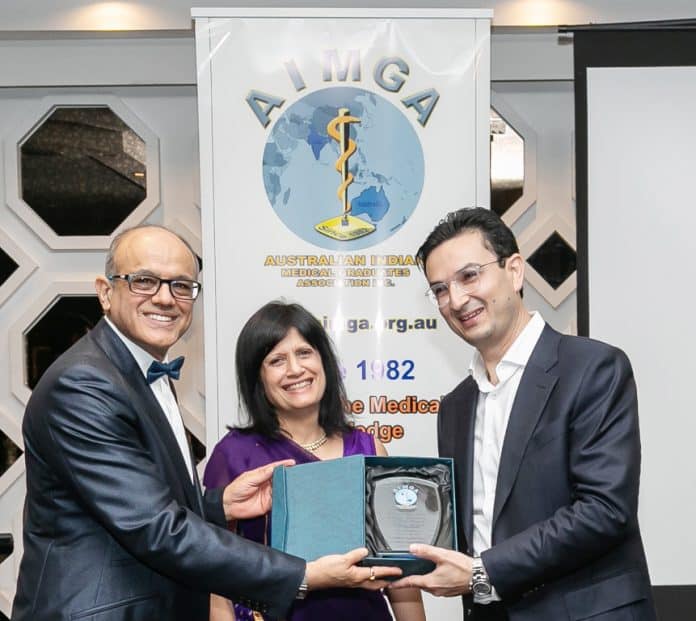 Walking Free. That’s the name of the book by Sydney surgeon Dr Munjed Al Muderis, who has successfully used osseointegration, an orthopaedic technique of implanting prosthetic limbs, to change the lives of thousands of people.


In the week when Sydney was hosting the Invictus Games, there could not have been a better keynote speaker at the Australian Indian Medical Graduates Association (AIMGA) annual dinner.

On that very day, Dr Al Muderis had seen his patients win gold and silver at various events, and had had breakfast with Prince Harry, who three years ago had enlisted his aid to help UK soldiers injured on duty.
Of course the title of his 2015 book refers also to his early life in Australia as a refugee, having been incarcerated in detention centres in WA as he fled a brutal regime in his native Iraq.

We’ve heard and read Al Muderis’ story a few times before, at the Sydney Writers Festival, in magazines, in a TEDx talk, on Anh Do’s ABC show Brush With Fame, to name a few. But his remarkable story – of escape from Iraq (after Saddam Hussein’s men ordered his hospital staff to cut off the ears of army deserters), paying people smugglers to get him to Australia on a leaky boat, and even further horrors in detention – is worth listening to again and again.
One way to heal a wound, a doctor might recommend, is to keep it exposed.

In its most recent telling at AIMGA, the gasps were heard yet again as he retold his tale, and so was the applause.
It is a tale Al Muderis recounts with brutal honesty – albeit with self-deprecating humour to lighten the intensity. He succeeds each time in leaving his audience in complete and utter awe, for a boy who watched The Terminator and dreamt of “creating a half-man-half-robot”; for a detainee stripped of his identity and told by Phillip Ruddock, “You’ll never be able to prove your credentials as a doctor”; for a medical trainee who silently bore the bullying taunts of his batchmates; for an orthopaedic surgeon who realised his childhood dream and took his craft all over the world; for a successful professional who is today feted by princes and presidents.
AIMGA under the leadership of Dr Sunil Vyas has had some memorable orations in recent years. (As he finishes his tenure as president shortly, it is hoped that the tradition that he has established continues on to greater heights.)
The association of Indian-origin doctors (no longer restricted to ‘Indian graduates’ alone) was founded 37 years ago. It undertakes professional, cultural and philanthropic activities. In recent years it has raised its profile to community-based activities such as health checks at community fairs, and perhaps more significantly, advocacy for members, especially against the draconian registration rules for overseas trained doctors.
“AIMGA includes medical practitioners who cover a wide spectrum of specialities and who serve in both the community and hospital sectors of healthcare,” Dr Vyas described. “Our membership includes distinguished medical practitioners recognised at both state and national levels for their contributions to medicine and society.”
Medical professionals in other communities have banded in a similar fashion – Dr Al Muderis revealed he was due to address the Iraqi doctors’ association shortly, and the President of the Australian Medical Association (NSW) Dr Kean-Seng Lim, also a guest on the occasion, mentioned there is an association of Chinese-origin doctors as well.
Of course in recent months, doctors have been hugely visible with their political pronouncements, such as with the refugees on Nauru and Manus Island. Indeed, at the AIMGA event Dr Al Muderis himself made an impassioned plea for the children to be removed from detention (although there were murmurings in the audience that he should have extended this to all inmates and not kids alone). The advent of Dr Kerryn Phelps, former AMA head, into the political arena as an Independent representing the high-profile Wentworth seat, and the subsequent announcement of another former AMA head Dr Brian Owler as a Labor candidate for Bennelong, must be cause for cheer among the medical fraternity as they leap from advocacy into decision-making roles.
The current political turmoil did not go unnoticed at AIMGA either: in his concluding remarks Dr Al Muderis made three observations. One, that doctors must strive to channel their expertise towards people that need it most; two, that our politicians must stop bickering and get back to working for the people, and three, that it is high time we looked beyond our ethnic differences and treated each other with respect and love.
Rather telling that he chose to end his moving presentation – of a life filled with incredible highs and the lowest of lows – with that particular four-letter word.

Jyoti Shankar - December 6, 2021 0
The #StopAdani grassroots movement is made up of thousands of individuals and community groups across Australia taking action to stop Indian billionaire Gautam Adani’s...