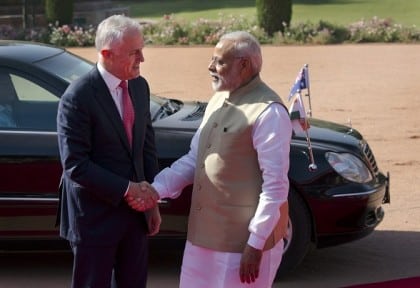 “The Prime Ministers committed to deepening the bilateral defence and security partnership… As fellow Indian Ocean nations, the two Prime Ministers also underscored Australia and India’s joint commitment to enhancing regional cooperation in promoting maritime safety and security,” said a Joint Statement after Prime Ministers Narendra Modi and Malcolm Turnbull held talks accompanied by their respective delegations.
Turnbull, who returned to Canberra following his visits to Mumbai and New Delhi, told the Australian Broadcasting Corporation that, at this point in time, a free trade agreement was not viable.
“It may be that the conclusion will be reached that the parties are too far apart to enable a deal to be reached at this time,” Turnbull said. “The fact is that the Indian offers have not been adequate to date. It has got to be a deal worth doing.”
The Prime Minister said while talks would not stop between India and Australia, it would take time for India to internally review its stance on both free trade and protectionism.

“The fact is that there hasn’t been enough progress, and so what we’ve agreed to do is to ensure that our negotiators get back to the table and they identify the respective claims so we can see where they’re close, where they’re far apart, and the issues that they’re not addressing,” he said.
“The important thing is that Prime Minister Modi and I have given our prime ministerial direction and leadership and impetus to ensure that the two sides will focus on the ‘nitty gritty’ of what the free trade agreement would involve.”

Laying stress on students exchanges between the two countries, Modi said that while Australia was home to over 60,000 Indian students, an increasing number of Australian students was coming to study in India.

On his part, Turnbull said Australia was helping India in its water management policy while sharing expertise in the area of renewable energy.
Stating that trade in goods and services between the two sides stood at $20 billion, he said there was scope for increasing this.
“We are working with India for a quality RCEP (Regional Comprehensive Economic Partnership),” he said.
RCEP is a proposed free trade agreement between the 10 member-states of the Association of Southeast Asian nations (Asean) and the six countries with which Asean has free trade agreements — Australia, China, India, Japan, South Korea and New Zealand.
On the Comprehensive Economic Cooperation Agreement between India and Australia, Turnbull said they had “very good discussions”, and that both felt that “progress has not been as fast as either of us would like it to be”.

The two sides “expressed their support for peace, stability, prosperity, security and integrity of Afghanistan”, stressing the need for “early peace and reconciliation through Afghan-owned and Afghan-led process” and calling for “ending external support for terrorism”.
On the engagement with ASEAN, the Prime Ministers noted the growing strategic importance of South-East Asia and “recognised ongoing cooperation in other regional bodies such as the ASEAN Regional Forum, and ASEAN Defence Ministers’ Meeting Plus (ADMM+), and the Asia Europe Meeting”.
According to the statement, Turnbull reiterated Australia’s support for India’s membership of the Asia Pacific Economic Cooperation (APEC) forum, while both sides expressed the desire that the Indian Ocean architecture keeps pace with regional issues and addresses emerging threats and challenges in the region.

On defence ties, the joint statement said that both nations “remain strongly committed to the breadth of their defence ties, including through ongoing annual staff talks for Army, Navy and Air Forces”.
Two sides will hold their first joint army exercise in 2018. AUSINDEX, a bilateral maritime exercise, first held in the Bay of Bengal in 2015, will be again held off the Western Australia in 2018.
Recognising terrorism as the most important threat to peace, India and Australia expressed the need for urgent steps against it and “expressed determination to take concrete measures to step up cooperation and coordination among the law enforcement, intelligence and security organisations”.
The two sides welcomed the signing of the MOU on Cooperation in Combating International Terrorism and Transnational Organised Crime.
India, in the joint statement, called Australia an important partner who supports it in its growth path.

The Australian Prime Minister arrived on Sunday 9 April on a four-day state visit to India – his first to India since he assumed office in September 2015.
His predecessor Tony Abbott had visited India in September 2014 and this was followed by Modi’s visit to Australia in November that year.

Prime Minister Narendra Modi and his Australian counterpart Malcolm Turnbull had a big day out after the Australian Prime Minister arrived on 9 April.
The two leaders boarded a Delhi Metro train at Mandi House station to visit the Akshardham temple in east Delhi.

A spokesman for the BAPS Swaminarayan Akshardham shared details of their hour-long visit of the cultural complex.
Prime Ministers Modi and Turnbull were welcomed with garlands by BAPS sadhus on behalf of HH Mahant Swami Maharaj.

Both dignitaries visited the main Akshardham Mandir and paid respects to Bhagwan Swaminarayan by offering flowers.
Both the Prime Ministers also visited the 14-minute boatride exhibition called Sanskru Vihar, which showcases 10,000 years of India’s glorious culture in a nutshell. Mr Turnbull was fascinated by the cultural history and contributioons of India shown in the exhibit.
PM Malcolm Turnbull wrote in the visitor’s book, “This has been a very special insight into India’s history, but above all its future. Thank you so much PM Modi.”
A spokesman said the visit had first been proposed by BAPS representatives in Australia. A fortuitous location meant the Akshardham earned a place on the itinerary after Mr Modi wanted Mr Turnbull to accompany him on a Metro ride. The Akshardham was a perfect stop for Mr Turnbull to learn more about India’s ancient traditions and culture.

Earlier in the day the visiting dignitary was accorded a ceremonial welcome at the Rashtrapati Bhavan.
“Our ties are strong and will be stronger because of this visit,” Turnbull told the media after his ceremonial welcome.
“Prime Minister (Narendra) Modi is leading this most remarkable nation on a extraordinary journey of growth and development,” he said.

“The achievements of India are the admiration of the world,” Turnbull said, adding: “We in Australia look forward to working even more closely than we have done in the past.”
“We are bound together to ties of history of values of people. We look forward, Prime Minister (Modi) and I, to making that even stronger in this visit,” Turnbull added.
Turnbull was received by Modi at Rastrapati Bhawan and was then accorded the ceremonial guard of honour in the forecourt of the presidential residence.

Australian Prime Minister Malcolm Turnbull visited the sprawling headquarters of Tata Consultancy Services at Banyan Park on Tuesday afternoon.
Turnbull was accorded a welcome at the TCS state-of-the-art Executive Briefing Centre at Banyan Park, Andheri (East) by top officials including Managing Director and CEO Rajesh Gopinathan.
He was taken around and shown the innovative solutions developed by TCS from banking to the retail sectors, besides a glimpse of all the work the software giant is doing for the people of India.
“We also showcased how we are able to leverage technology for innovation and global competitiveness of Australian clients.
Turnbull evinced keen interest in the work of TCS to promote STEM education, especially amongst women and the leverage of technology by government departments.
“It was great to have the Australian PM with us. TCS works with six of the top 10 companies on the ASX (Australian Securities Exchange),” Gopinathan said.