Home Arts Book review: Is there an alternative to democracy?

Why democracy does not always lead to solidarity, prosperity and liberty but to social conflict, runaway spending and a tyrannical government 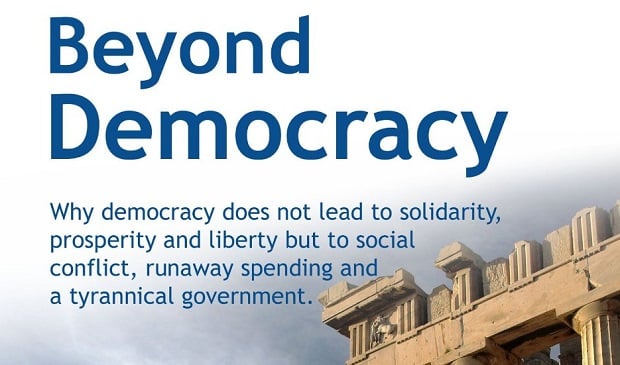 Each year, the United States government releases a Human Rights Report on China. In this report it waxes eloquent about the lack of democracy in the Communist Party controlled state, as if it were beyond question that democracy is an unambiguously good thing. So confident is the US government about the moral infallibility of democracy, that in the president’s National Security Strategy document, promoting democracy abroad is stated as an explicit goal.

In Beyond Democracy by Frank Karsten and Karel Beckman, the authors dissent from the mainstream perspective on democracy and focus on its negatives. After reading this book it would be difficult to ever again view democracy in a positive light. Instead of promoting freedom, democracy takes it away.

It is an inherently collectivist system that can be likened to totalitarian ideologies such as Nazism, Fascism and Communism. “In principle, no freedom is sacred in a democracy, every aspect of the individual’s life is potentially subject to government control… At the end of the day, the minority is completely at the mercy of the whims of the majority” (page 27).

Frank Karsten and Karel Beckman point out that while democracy may work well when implemented in a small city-state, there is much less accountability when applied to large countries with millions of people of varying cultural and ethnic backgrounds. In smaller jurisdictions, politicians can be expected to be closer to the people and to be hesitant to depart from what a majority wants, due to the personal nature of their electorate (everyone knows everyone else). In larger jurisdictions however, political parties frequently do things that a majority of people do not want.

Accountability is also diminished by the indirect nature of democracy which relies on the election of representatives. Citizens have less say than in a direct system where they are allowed to vote on every legislative proposal: “Everyone knows that governments regularly take decisions that most people oppose. It is not ‘the will of the people’, but the will of politicians – prompted by groups of professional lobbyists, interest groups and activists… they all know how to work the system to their advantage” (page 18).

Votes that are cast in large countries are vague preferences by which politicians are only loosely bound, since there are no legal consequences for breaking an election promise. For this reason, the authors suggest that “(v)oting is the illusion of influence in exchange for the loss of freedom”, arguing that the probability of one vote making a difference is so small that it would undoubtedly be better to remove many decisions – over healthcare, education and so on – from the democratic arena, and instead have them made by individual citizens through the private sector.

Moving away from voting, Karsten and Beckman also argue that democracy has broader effects on society, including on crime (“The democratic welfare state encourages irresponsibility and antisocial behavior”); educational and cultural standards (“[D]emocracy may be expected to lead to a dumbing down of the population and a lowering of general cultural standards”); and poverty (“Democracy doesn’t lead to prosperity, it destroys wealth”).

My only concern is that an undecided reader would find the book’s arguments lacking in detail and sophistication. A closer inspection of contemporary democracies would have illustrated their points more convincingly. For example, with respect to democracy and crime, a comparison of cases such as Australia – where crime is comparatively lower than in other democracies such as South Africa and America – would have made the arguments stronger.

Karsten and Beckman do a superb job however, when discussing alternatives to democracy. In response to the question ‘What would we replace democracy with?’, Beyond Democracy provides a nice answer: secession should be allowed, and a contractual society should be encouraged. “Diversity in governance implies that people can decide more easily under what system they wish to live”, the authors write.

“They can go to another municipality or county if they desire different governance. Such competition ensures that rulers are held accountable, which is hardly the case when a citizen’s influence is restricted to elections once every four years”.

The authors see a positive future for realising freedom. Human beings are not opposed to decentralisation per se: it is just that they demand a high threshold before seeking to break away. Unless there is some urgent pressing reason, people prefer to tolerate their differences.

Thus when Pakistan seceded from India in 1947 and the Indian government decided to accept Pakistan’s departure, it was probably due to an acknowledgement of irreconcilable cultural differences (in this case the clear division between Hindu Indians and Muslim Pakistanis).

All in all, Beyond Democracy is a refreshing breath of fresh air. The authors have done a great service in compiling the main arguments against democracy in an accessible manner.