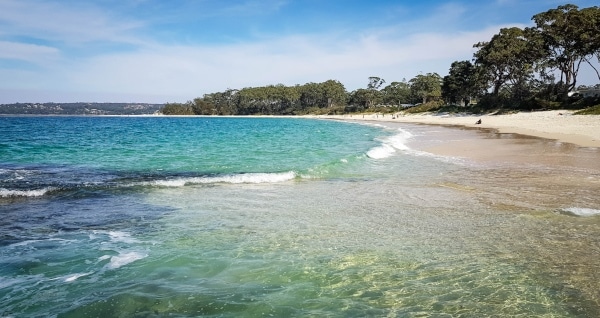 A port of Canberra’s own – to rival Sydney! Think I am joking? Absolutely not! This is one of the astonishing facts we discovered about Jervis Bay, apart from the fact that it is nine times bigger than the Sydney Harbour. Why most of us have not heard about the idea is probably because it was shelved soon after it was proposed in 1908 and the bay was acquired from NSW by ACT in 1915. Regardless, Jervis Bay is home to some of the most gorgeous little towns in the east coast of ACT, and is some 3 hours’ drive from both Canberra and Sydney. Humble it might look, but the bay has another tall claim attached to it – it is home to Hyams Beach, which the Guinness Book of World Records claims has the whitest sand in the world.

Jervis Bay has twenty kilometres of white sand beaches curving around its shores, and all of these are equally picturesque. Huskisson Beach, with its glistening green waters in sheer contrast to the blue sky and white sands, is a coastal paradise. As good as a private beach with rocky points and reefs, my family and I shared it with some six others on the curvy 750m coastline.
After that stunning intro to the bay, it was time to soak up some history on how the bay evolved over the years, at the Maritime Museum just 10 minutes from the beach. Very well maintained with friendly staff manning the station, the museum exhibits are categorised into 4 sections: Jervis Bay History, Historic Vessels, Surveyor’s Gallery and Science and the Sea. The Science and the Sea exhibit features a collection of scientific instruments that made the exploration via sea less dangerous from the 1700s up until the 21st century. Another unique experience was the old ‘Lady Denman ferry’ built by local craftsman Joseph Dent in 1911, which carried passengers across Sydney Harbour until the ferry was decommissioned in 1974 and brought back to Jervis Bay.

Yet another visual treat is the wood-frame of a vessel housed outside the museum, right next to the Alf Selftree boat shed (named after a local ship builder) surrounded by mangroves and a boardwalk leading to the huge fishpond. The pirate trail activity sheet that the museum supplies is sure to engage the kids – small or big.

When it came to lunchtime, a stroll in the town centre found us some great fish and chip places, to enjoy perched on the beach side. A store named ‘Ethik’ that sells cottons and ethnic jewellery with an Eastern flavour captured our attention. Interestingly, Steve Cannon, the co-founder, said the collection was pretty much all from Nepal, but his future plan is to source from India. He revealed his biggest wish of all time – to spend two weeks on a houseboat in Kerala. And the only person that he wants on-board is a talented chef. Being a foodie, it sounded like a perfect plan to me too!
A drive to visit the renowned Point Perpendicular light house was next on the cards. The view of the light house at the end of the horizon from the balcony of our beach house as we checked in on Friday night, was too good to be missed. After nearly an hour’s drive through the forest, the light house appeared before us. Though there is no access to the insides of the structure, the magnificent views from there and the rolling layers of clouds that formed the backdrop of the lighthouse, made the visit worthy of our time spent.

Another quick visit to a small beach later, we went back to our abode which was a beachside house booked through Airbnb. Booking for the first time through the online hospitality service (I admit being a slacker not to try this out earlier), I guess the pertinent question is whether you prefer to come back to the crisp white sheets and artificially manicured lounges of a hotel or to a lived-in home with character? Lived-in home it was for us this time, and we loved the pottery collection that the owner had decorated the interiors with. A backyard with a collection of native plants, a very well-equipped kitchen and pantry, an extensive kids’ video library and a balcony overlooking the shores were additions that we were not expecting, but thoroughly enjoyed!

Back in the Huskisson town centre, a dolphin cruise awaited us. Although available in most medium-sized coastal towns, what makes this 1.5-hour dolphin watching experience unique is the delight of watching the bottlenose dolphins playing in the aqua waters of Jervis Bay, aboard a catamaran. Complimentary morning tea included, the trip can be recommended to anyone who would love to go out and explore the waters. There is whale watching available too, for those who are keen.
A relaxing stroll along the shallow and glassy green waters of Honeymoon Bay – a 100m wide crescent shaped rocky inlet closed off from Jervis Bay except for a 20m wide opening – was perfect, before a satisfying meal for lunch and then heading back to the hustle and bustle of our routine lives.

Come back we will, to explore the Booderee and Jervis Bay National Parks that are said to be blessed with beautiful walking trails and calm and secluded beaches. If you’re in for a more active holiday, the options here are endless – swimming, snorkelling, paddling, kayaking and what not!
But for now, it was time to say good bye to one of most pleasant weekend getaways we have ever had.

COVID-19 travel: a passage to India