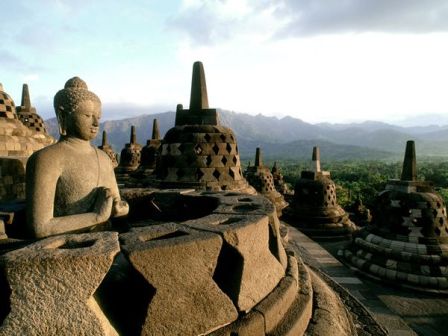 Indonesia has gifted a beautifully crafted white statue of Saraswati, the Goddess of Learning and the Arts to the USA, as a gesture of friendship. Most Western reports have expressed surprise that this Muslim majority country (with the largest Muslim population) has gifted the statue of a Hindu goddess, when Hindus make up only about three per cent of that country’s population.
But such reports have got it wrong. Indonesia cherishes its Hindu past which incidentally, is termed within the country as its ‘Golden Age’ (Zaman Emas). Two famous Hindu epics, the Mahabharata and the Ramayana were declared as the official legends of Indonesia a long time ago. These are taught in Indonesian schools and thus all Indonesians are conversant with these legends.
The choice of Saraswati as a gift does not represent a minority, but a vast majority of the Indonesian people. As the Indonesian spokesperson said, Devi Saraswati was chosen because “her representation at the Indonesian Embassy was not decided only out of any religious grounds, but more on its symbolised values that parallel with several key principles of Indonesia-US relations under comprehensive partnership, in particular education and people-to-people contact.”
It was Indonesia’s founding President Sukarno who provided official recognition for this already existing situation. He had a Javanese father and a Balinese Hindu mother, and he made Garuda, the vehicle of the Hindu God Vishnu, as the country’s symbol. Garuda also was chosen as the name of Indonesia’s airline. Garuda, depicted differently, is also the symbol of Thailand.
Freedom Square in Jakarta was erected to showcase Indonesia’s various historical epochs. Amongst the large statues built, the first one is a chariot showing Krishna preaching the Bhagwad Gita to Arjuna. Indonesian television has shown the entire Mahabharata series produced for Indian audiences dubbed in Indonesian, several times. The Ramayana is very important in the country. In honour of Laxman who led the fleet against the demon-king Ravana, Indonesia calls its admirals ‘Laxmanas’.
When Indonesia became an independent nation, thanks to the intervention of Australia and India at the United Nations, it was a large archipelago with diverse cultures, several religions and sects. The founding President Sukarno invented the slogan ‘Unity in Diversity’ which is now Indonesia’s motto, and he set about to create unifying bonds.
He did this by making the Mahabharata and Ramayana official legends and by invoking the Buddhist concept of the Pancha Sila or five principles. The statement of the Indonesian spokesperson concerning the non-religious nature of the Saraswati statue is correct, because She emanates from Indonesian legends which transcend all religions and sects in that country.
The island of Java where a majority of Indonesians live, practice a syncretic form of religion. The legends of the Hindu epics are celebrated in unique puppet shows, drama and dance. This writer saw this fascinating blend between Jakarta and Jogjakarta. On the way to Bandung, there exist places at which puppets are meticulously manufactured.
When Suharto assumed the Presidency, he went a step further than Sukarno, by Sanskritising Indonesia’s educational terminology.
Most Indians with whom I have spoken do not realise the Indian-ness and the Hindu-ness of Indonesia. When BJP leader Lal Krishna Advani visited Indonesia recently, he expressed his astonishment at the Indian things he had encountered, including banks with the names of Hindu deities and Ganesha on an Indonesian banknote.
Bali is a concentrated culture house of Indonesia. It has some of the finest craftsmen who create incredible representations of Hindu art. This writer was thunderstruck with their creations. It was fortuitous that the Indonesian Ambassador Dr Dino Patti Djalal came up with the idea of the presentation to the US, along with the regent of Badung.
The statue of Saraswati has four hands which is a common feature of Hindu deities. One hand holds prayer beads (aksamala) symbolising learning; two hands play a string instrument (veena) symbolising the arts; and the fourth holds a manuscript symbolising learning. Saraswati is shown on Her vehicle, a white swan (hansa). This is a faithful depiction of Saraswati as idealised in the painting by Raja Ravi Varma, India’s most famous painter of mythological themes. The adherence to Her symbols has been meticulous.
In Bali, there is temple dedicated to Saraswati and an educational institute called Maha Saraswati University. In Thailand, Saraswati is known as Surasawadee.
Indonesia’s choice of Saraswati as a gift to the USA is a tribute to India, from where the concept of Saraswati originated.