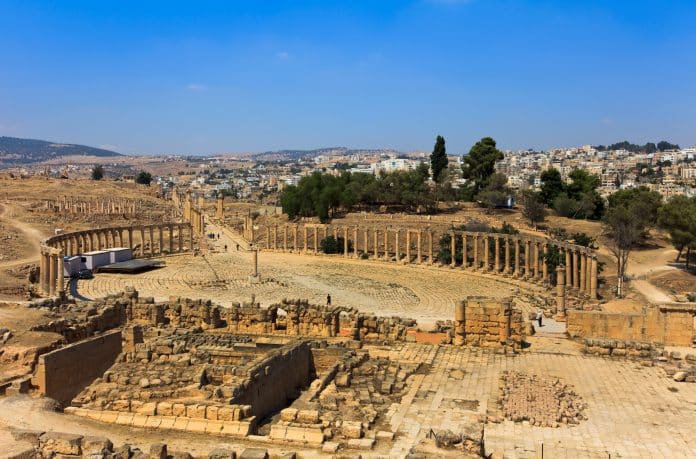 Here’s our pick of the best spots in Jordan – a range of destinations wide enough to fit the look of any Instagram feed:

Jordan’s Dead Sea remains one of the country’s top attractions for its unique water qualities, climate, and historical and spiritual significance. Considered the world’s largest outdoor natural spa – Dead Sea has been the holiday and leisure spot of choice for celebrities and top-flyers from all over the world for decades.

Lie back and float into nothingness with all the goodness of the Dead Sea soaking into your skin. Rich in minerals, vitamins with healing properties, the Dead Sea mud will make you feel your skin will fresh and renewed. The Dead Sea is definitely an Instagram-win spot!

Probably the most popular tourist destination in Jordan after Petra, Jerash is considered by many to be one of the best-preserved Roman towns on the face of the Earth. A medley of the ancient Greco-Roman and the Arab cultures, Jerash boasts of the region’s earliest settlements dating back right to the Bronze Age (3200 B.C.-1200 B.C.).

Inscriptions from the time of Alexander the Great can be found here along with some exquisitely preserved Roman architecture that led to it being referred to as the ‘Pompeii of the Middle East’. The ruins of these ancient empires are in impeccable condition owing to the strict non-encroachment policy. With structures like the Oval Forum, the Hippodrome and the Temple of Artemis, Jerash is the best place for people interested in ancient Grecian and Roman cultures.

The giant red mountains and vast mausoleums of a departed race have nothing in common with modern civilization, and ask nothing of it except to be appreciated at their true value – as one of the greatest wonders ever wrought by Nature and Man. Although much has been written about Petra, nothing really prepares you for this amazing place. It has to be seen to be believed. Petra, the world wonder, is without a doubt Jordan’s most valuable treasure and greatest tourist attraction and one of the must-visit places in Jordan.

After sunset, Amman turns into a bustling city with a thriving nightlife. The city is lined with coffee houses, bars, and restaurants in which you can soak in a cosmopolitan vibe. The warm and friendly nature of Jordanians makes one enjoy the infectious vibe of the city. Be it the amazing Arabic architecture or tempting delicacies, Jordan reveals it’s another side only when the day turns to night.

The ancient port city of Aqaba

Tired of all the sand and mountains? What you need is a visit to the only coastal city in Jordan, Aqaba. Largely restructured by the 16th-century Mameluks, it was one of the most important trading points in Jordan. Known as Ayla in ancient times, Aqaba finds a mention in many historical texts. The history of trade in Aqaba dates back to as early as 600 B.C. when the Babylonians took it over.

Even Greeks around 300 B.C. considered it one of the most important trading cities in the Arab world. Its importance became more pronounced by the fact that it was a connecting point for three continents – Asia, Europe, and Africa.

Now sprawling with a chain of luxury hotels, Aqaba is popular for its coral reef, which houses one of the best diving spots in the world. If you are looking for a deviation from the usual landscape of Jordan, Aqaba is the destination.