As the Australia India Youth Dialogue concluded in India, Chairperson Karan Anand told us of the role the organisation can play in the bilateral relationship 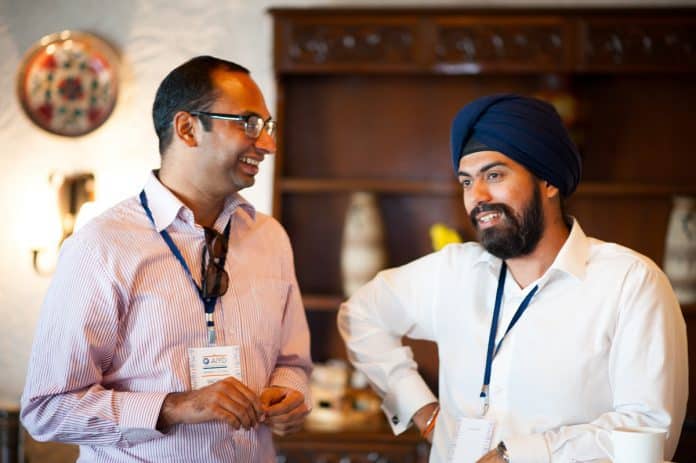 Reading Time: 7 minutesWhat is the Australia India Youth Dialogue? How did it originate?
AIYD is the leading Track II bilateral young leaders’ dialogue between Australia and India. Each year we bring together 15 young Indians and 15 young Australians under the age of 40, all demonstrated leaders in their fields, to engage in a four-day dialogue about matters that affect the bilateral relations between the two countries with a focus on youth engagement. This year was the seventh dialogue.

AIYD has its origins from the 2009 student attacks in Melbourne. The thesis of the founders was that there was no (existing) mechanism to bring young leaders together to discuss in a proactive and constructive way such issues that were misconstrued in the media. AIYD has grown beyond that and has now become an important forum to bring young leaders together and start to inform government on both sides on how to shape policy and create opportunities going forward. It takes place every year, alternating between India and Australia. This year, it took place in New Delhi and Mumbai from 21 to 24 Jan.
Who can apply to participate in the dialogue?
Anyone who is a citizen of India or Australia under the age of 40. Our selection criterion is quite rigorous. We are specifically looking for people who have demonstrated leadership in their field. We take a diverse set of delegates. This year, we had politicians, CEOs of for-profit and not-for-profit companies, bureaucrats, diplomats, corporate senior executives, a couple of people in the sports space, and many in the arts space. We keep a 50-50 male-female proportion and try to have balanced regional representation.

What have been your main focus areas?
This year the theme was Digital Disruption, with three sub-themes – Future of Democracy, Future of Information and Future of Work. The reason we picked digital disruption was because it’s high on the agenda of both Prime Ministers Modi and Turnbull – in India, with initiatives such as Startup India and Digital India, and National Innovation and Science Agenda in Australia. It’s also an area where the senior leaders look towards youngsters for guidance as we are already at the forefront of shaping the digital economy – not just at the periphery and inheriting it, but doing the thinking around it. Last year, the theme was ‘innovation’ with a focus on health, start-ups etc.
Who were some of the most interesting people you had this year?
All of them were interesting! We had two sitting members of parliament – Scott Farlow MLC, Parliamentary Secretary to the NSW Premier and the leader of the Liberal party in the Upper House, and Matt Keogh, a Labor MP from Burt, WA. We also had Sachin Kumar, the head of strategy and scheduling, Cricket Australia. On the Indian side, among the notable participants were Madhav Singhania, special executive with JK Cement and co-chair of the Young Indians branch of the Confederation of Indian Industries; Bhakti Sharma, one the youngest and the only female panchayat leader in Madhya Pradesh; Tasneem Fatima who is a wheelchair basketball player and founder of the Delhi State Wheelchair Basketball Association; Shaili Chopra, a former news anchor and founder of an online women’s platform called SheThePeople.TV; and Bindu Subramaniam, an outstanding musician who is the daughter of violin virtuoso L Subramaniam and singer Kavita Krishnamoorthy.

How do people such as Bindu and Tasneem fit into the digital disruption discussion?
A musician such as Bindu would be interested to know about the rapidly changing business models of music. For Tasneem, the topic on Day 1 – The Future of Democracy – was quite relevant as it talked about building awareness through social media about challenges faced by disabled athletes in India and build a positive dialogue around it.
What have been some of the most tangible outcomes from the AIYD?
We do document our outcomes that have been sparked either directly as a result of discussion within AIYD or the people-to-people collaborations that are generated by the relationships formed during the dialogue. A lot of outcomes are from what we call the Group Challenge, an initiative we started two years ago.
In this, we divide up our delegates into six groups of five and give them eight hours to work together, over the course of four days, to unpack a problem related to the theme and solve it. The reason it is compelling is that it allows us to have something tangible at the end and it really talks to the enterprise of youngsters. At the end of the four days, they have to pitch the idea to a panel of judges.’

So, the winning idea in the 2017 dialogue was based on the fact that there is a huge imbalance in the two countries in regard to incidents of drowning. The number of people who drown in Australia is a very small fraction of the number of people who drown in India. Also, Australia has a strong culture of surf life-saving. So, there’s this group that is trying to mobilise a partnership with Surf Life Saving Australia and piggybacking on some initiatives in Karnataka and Goa where some Australians have already made the first steps to industrialise and essentially export life-saving from Australia to India. These people are connected to the Coogee Lifesavers Club. Then, there is the instance of the 2014 alumni of the AIYD. A delegate called Hakimuddin Habibulla, a former Indian Olympic swimmer, has a partnership with Aust Swim around training swimming teachers in India. And in fact, the people connected to Coogee Lifesavers Club and Hakim are finding a way to work together. They came together at AIYD 2018 to take it forward.
There is the example of Talish Ray, our 2015 alumnus and a Delhi-based lawyer, who has developed an online resource girlsgottaknow.in, with help from the University of Tasmania, for women seeking legal assistance in India, with information on everything from renting to dealing with harassment.
So, it’s not about just those four days of the dialogue but what it can activate and the on-the-ground outcomes it can deliver.

So what was this year’s winning idea?
Both countries have a strong culture of indigenous art, but those who create that art aren’t always fairly compensated for the hard work they put in. There are other challenges they face such as the fact that you can’t always attribute who the original artist is and some fraud takes place. So the idea is to put a blockchain type of system to validate and verify authentic pieces of art so you can trace who the original artist is. The idea like that is not intuitive and it comes from the enterprise of youth. So, it’s thinking about something that the governments aren’t necessarily contemplating in their formal meetings, but something that is of significant mutual value using, in this case, blockchain which is significant digital disruption in the world right now.
Some other good ideas from AIYD 2018 were about sharing cultural intelligence and experiences and another around piloting a critical thinking exchange programme amongst high school students in regional parts of both countries.

How do you interact with governments of the two nations?
One is an informal feedback mechanism, but the other is a formalised way. So, for instance, we worked with the Victorian government to bring out the Victoria-India Strategy. We hosted a round table with our alumni and provided formal feedback that went into the drafting of the strategy. A section of the Strategy does talk about AIYD and the importance of youth engagement. We provided a formal policy submission to (retired diplomat and public servant and current Chancellor of University of Queensland) Peter Varghese AO who is currently putting together an India Economic Strategy. We have also contributed to a few youth dialogues between Australia and countries such as the US, Japan, Vietnam, China and Indonesia. We have good relationships within the governments and these continue to develop as we move mature as an organisation.
One of the sub-themes this year, The Future of Democracy, seems quite interesting…
Yes, it was. Substantively, we had a panel discussion involving three MPs, one from Australia and two from India. They were Tim Watts from Gellibrand in Western Melbourne, Jay Panda from Kendrapara in Odisha and Meenakshi Lekhi from New Delhi. The two points of discussion were the impact of social media and how it has changed the way politicians communicate with their constituents and how Indian politicians use it as a way of on-the-spot problem-solving that Australians politicians don’t necessarily do or have to do. There was also a very good discussion about how digital disruption impacts the structure of democracy itself: ‘Do we need representative democracy going forward? If you have direct citizenry, why do you need public representatives?’ It was very interesting to contemplate a future without politicians, although the resolution of all and sundry was that democracy is the best governance model yet.
So what’s next for AIYD?
Seven years in, we have a cohort of about 210 alumni. If we are to be successful and impactful, the way we manage, engage and mobilise our alumni is really important. My plan during my tenure as Chair is to unlock the opportunities of an alumni programme. And using the dialogue is the way to stimulate that.