Badhaai Ho is an astutely handled, slice of life drama that keeps you entertained as three generations of the same family are all touched one way or another by social embarrassment when the lady of the house and mother of two “grown up” sons, unexpectedly finds herself pregnant once again.

The film sidesteps stereotypes and tells a quiet, firm, deeply humanist story about doing the right thing. It is a film that avoids any message or statement and yet shows us, with simplicity and infinite compassion, a timeless profound verity, that family bonds are the strongest. 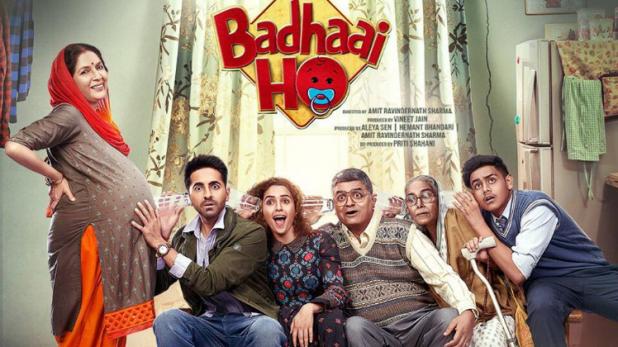 Set in a typical middle class milieu in New Delhi, the story revolves around the Kaushik family. Jitendra Kaushik (Gajraj Rao) aka Jeetu, is a near retiring Railway Ticket Collector who lives with his spouse Priyamvada (Neena Gupta) whom he fondly addresses as Bubbly, his aged mother essayed by Surekha Sikri and his two sons – Nakul and Gular. While Gular is in his final year at school, Nakul (Ayushmann Khurrana) the older one works in an IT company.

The film begins with the simplest and most ordinary manner in introducing the family and interrupts it with the amazing inciting moment, announcing the arrival of a “chota mehmaan“, without resorting to any assortment of gimmicks. It is some kind of tribute to the strength of the story and the warmth of the performances by Gajraj Rao, Neena Gupta, Ayushmann Khurrana, Surekha Sikri and Sanya Malhotra, that the film somehow manages almost to work. Yes, their expressions while reacting to the situation are priceless. It goes without saying that the entire cast gels like a family and their pangs onscreen are palpable.

Gajraj Rao and Neena Gupta make an ideal pair. They are naturally earnest and endearing in their performances.

Ayushman Khurrana and Sanya Malhotra as Renee his colleague, make a cute pair and their love story plays a pleasant sub-plot to the narrative. Sheeba Malhotra as Renee’s mother is short-changed with a miniscule, non-effective role, but her line, “His family is a circus, I don’t want to buy tickets for”, would surely etch her character into the minds of the audience.

It is touching to note how in the guise of geriatric behaviour, Surekha Sikri blurts out some home truths and defends her daughter-in-law, when in other circumstances she would be constantly bickering with her.

The script is unwavering. Narrated in a completely straightforward manner, the progression of this ordinary story is interrupted by some situational comedy that keeps the narrative afloat. While the first two acts are mundane, the final sequence is the most effective. It is honest and strong and has genuine emotional forte.

Mounted with moderate production values, Sanu John Varughese’s camera work is commendable. So is Dev Rao Jadhav’s editing. As for the background score, while the saxophone is effectively used to elevate and dramatize events on screen, the soundtrack is enhanced by tracks from old Hindi films like Amar Prem and Aradhana, which gives a nostalgic feel and resonates with a bond of familiarity.

Overall, in keeping with the context and the culture of the hypocritical society we live in, Badhaai Ho is a welcome change.