Chingari, the Indian alternative to TikTok, gets more than 2.5 million downloads 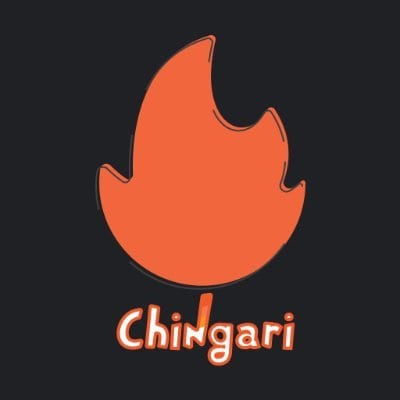 Indian-developed app Chingari, considered an Indian alternative to Tiktok, has witnessed 100,000 downloads per hour since the Indian government’s recent announcement to ban Chinese apps. It has now amassed more than 2.5 million downloads.

Chingari carries the tag of ‘original Indian short video app’ on the Google Play store. It was first released in November 2018 although it has garnered newfound attention with rising anti-China sentiment in India.

While the app’s founders are thrilled with its recent popularity, they see the app as more than just an Indian alternative to TikTok.

“Chingari is not limited to be a video sharing platform like other video apps. It’s a platform where you can read local and international news, check the weather forecast of your city, play games, participate in quizzes, and win prizes,” said co-founder Biswatma Nayak on Twitter.

Chingari is available for both iOS and Android and can be downloaded in numerous languages like English, Hindi, Punjabi, Gujarati, Tamil, and Malayalam. Content creators earn points per video view which can be redeemed for Paytm cash.

Multiple Chinese apps, including TikTok, were banned by India for concerns regarding user data. TikTok collects user information like access to the phone’s camera, contact list, and location through GPS tracking and there have been fears that this private information is being shared with authorities in Beijing.

Much of these concerns have caused Indians to stop using TikTok and opt for native apps like Chingari instead. Outside of India, Chingari has been trending in countries like the United Arab Emirates, Kuwait, and Singapore.

While the app has received a 4.7-star rating on the Google Play store, reviews remain mixed. One user called it “one of the best apps for recording and sharing short videos” but many others felt there was scope for improvement.

“The app is not as refined as the top social networks, user interface needs more renovation with many options and buttons missing, lots of bugs, and lagging in the graphics. Hope it will get better with time,” read a review.

Prior to the ban, Chingari had already received shout-outs from big names like Anand Mahindra of the Mahindra Group.