9 Indian films and web series to watch in October 2021 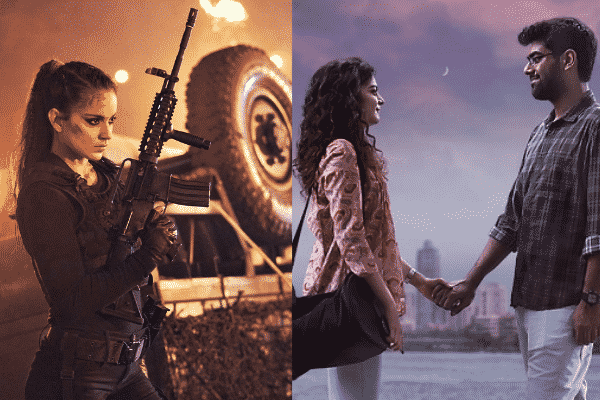 Dhaakad releases in cinemas on 1 October.

It’s October, after all, so who didn’t predict a horror movie coming? In this Tamil movie offering, Kavin and Amritha Aiyar play office colleagues trapped in their haunted office, stuck playing a mystery game with only a lift as their escape route out. Fingers crossed for this one!

Upcoming romance-drama The Conversion takes on a difficult topic: religious conversions for marriages in India. After all, “love jihad” has been widely discussed in the last few years. In this love triangle set in Benaras, Bablu, Dev, and Sakshi (played by Prateek Shukla, Ravi Bhatia, and Vindhya Tiwari) tackle this controversial topic head on.

The Conversion hits cinemas on 8 October.

The “biryani monster” is back! After moving in together, balancing love and their careers, and even embarking on a long distance relationship, what lies in store for lovebirds Dhruv (Dhruv Sehgal) and Kavya (Mithila Palkar)? We’ll find out in this fourth instalment of the hit show, a lovely take on modern relationships in India.

The newest season of Little Things drops on 15 October.

In this sports drama directed by Akarsh Khurana, Taapsu Pannu plays a track athlete banned by the country’s athletic federation over a hyperandrogenism policy. While not overtly credited to Indian track star Dutee Chand, Rashmi Rocket certainly takes inspiration from this real-life case, choosing instead to address the “struggles of female athletes”.

After Commando (2013), Khuda Haafiz (2020) and now Sanak, Vidyut Jammwal certainly seems to be the new age action star of Bollywood. In this action thriller, a remake of Hollywood film John Q, Jammwal is joined by Neha Dhpia, Rukmini Maitra, and Chandan Roy in lead roles. Can the hero save his wife and helpless hostages in time?

Inspired by real life events, biographical film Sardar Udham stars Vicky Kaushal as Udham Singh, an Indian revolutionary who travelled to London 21 years after the Jallianwala Bagh massacre to assassinate Michael O’Dwyer, the then-lieutenant governor of Punjab who oversaw the massacre. Director Shoojit Sircar, who has helmed productions like Vicky Donor (2012) and Piku (2015) has called this film his “dream project.”

Coming off the massive success of Scam 1992, Pratik Gandhi returns to our screens with this romance-drama opposite Aindrita Ray. The film gets its name from the popular folk theatre of western India called bhavai, and is about two lovers in a village who play the characters of the Ramlila. In the past month, the film’s previous title Ravan Leela drew flak for hurting Hindu sentiments, suggested a romance between Ravan and Sita.

Bhavai will see a cinematic release on 22 October.