9 Indian films and series to watch in September 2021 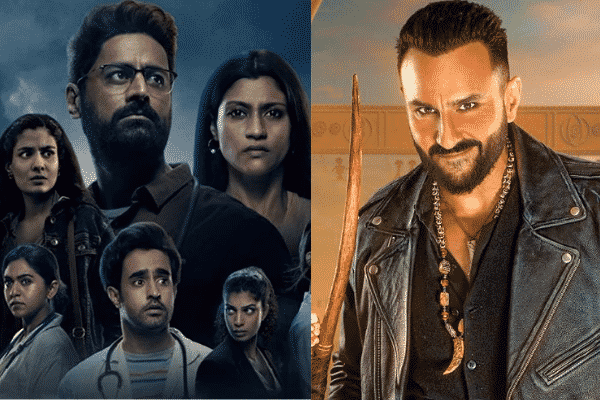 As if to follow in his brother’s footsteps after Vicky Donor, Aparshakti Khurana’s latest film takes on another taboo topic: contraception. Directed by Satram Ramani, Helmet is about a botched robbery where the stolen boxes, expected to contain electronics, are instead packed with condoms. With people shy to openly talk about them, let alone buy them, what can the robbers do with their new stash?

Originally expected to release in March 2021, this series pays tribute to the doctors, nurses, and other medical staff who were on call during the 26 November terror attacks in Mumbai, working against the clock to saves hundreds of lives. It stars Konkana Sen Sharma, Tina Desai (of Sense8 fame), Mohit Raina, and Shreya Dhanwanthary and created and directed by Nikkhil Advani, along with Nikhil Gonsalves (director of Netflix’s Hasmukh).

Boasting of big names like Saif Ali Khan, Arjun Kapoor, Yami Gautam, Jacqueline Fernandez and Jaaved Jaaferi, Bhoot Police is a horror comedy about a gang of ghost hunters. It’s directed by Pavan Kirpalani, whose previous work includes Ragini MMS (2011) and Phobia (2016). Bhoot Police comes on the tails of Bollywood’s latest fascination with horror (like Laxmii and Ghost Stories), hopefully this fares better than its predecessors.

The film is all set to release on 17 September.

A remake of Andhadhun (2018) about a piano player pretending to be visually impaired who inadvertently becomes a witness in a murder, Telegu film Maestro hopes to take on a slightly different approach to the award-winning black comedy. It stars Nithin, Tamannaah, and Nabha Natesh and is directed by Merlapaka Gandhi.

Joining Netflix’s slew of true crime is this docuseries about the Bengaluru police. Providing a glimpse into the life of a police officer in India and how police investigations are conducted in the country, Crime Stories: India Detectives showcases four major crimes, including a baby’s kidnapping, a missing child, and a murder.

The docuseries begins streaming on 22 September.

In this global offering, Freida Pinto and Logan Marshall-Green (known for his roles in 24, Prometheus, and Spider-Man: Homecoming) play a couple left traumatized by a home invasion. Left with no choice but to kill the ski-mask wearing intruder, they find themselves with more questions than answers when an investigation ensues – can they even trust each other?

This crime thriller releases on 22 September.

The anthology series debuts on 23 September.

Kota is an Indian city known for its coaching centres that train students for competitive entrance exams. Comedy drama Kota Factory provides a humorous, honest look at the student lifestyle in Kota, outside of the typical critique of the Indian education system (think 3 Idiots or Laakhon Mein Ek). It’s also the first black-and-white web series in India, shot in colour and then graded into monochrome. After its original release on Youtube and massive success, the series now moves over to streaming giant Netflix.

In the 90’s, tennis legends Leander Paes and Mahesh Bhupathi were considered among the most feared doubles pairs. They played together from 1994 to 2006 and reunited from 2008 to 2011. In this 7-part series, award-winning filmmaker duo Ashwiny Iyer Tiwari and Nitesh Tiwari provide an honest look at the friendship, ambition and hard work that marked the duo’s career, including the very public fallout that left many speculating on their off-court lives. According to its makers, Break Point is a bittersweet story of friendship and success.

The series does not have a confirmed release date yet although it is expected to release later this month.