Home Main Category She came, we saw, she conquered

For Sydney’s Aishoholics, it was Christmas – and Diwali – all over again. 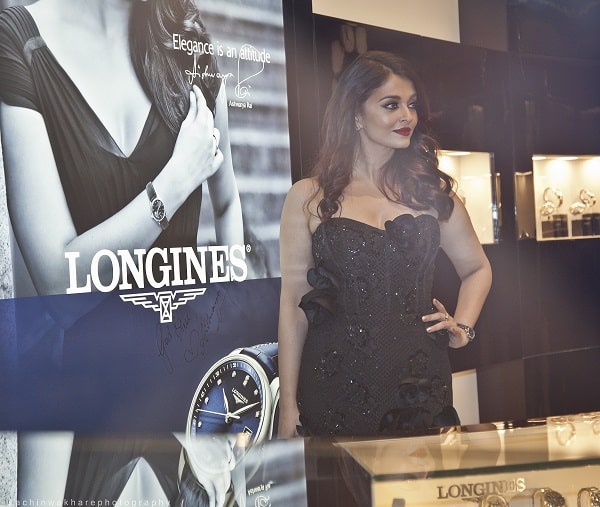 The news had gone out only days before, that India’s sweetheart Aishwarya Rai Bachchan would be in town for Swiss watchmaker Longines again this year, to launch a new store in Sydney’s Queen Victoria Building.

Keen observers had already spotted her in the ad for the luxury watch – especially that giant drop-down inside the QVB. 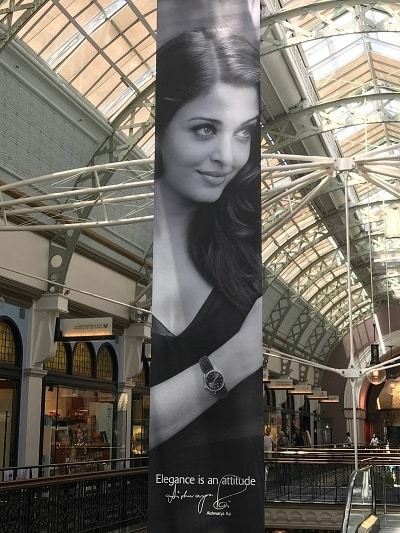 And so on the appointed date, they thronged the building, people of all ages, as close as they could get to the newest Longines store in Sydney.

As the stipulated time approached, the quiet chatter was that Indian celebs always take their own sweet time to arrive… (eye roll). And that in 2016, she was nearly two hours late (even as ambassador for a time-keeper. Oh, the irony!). 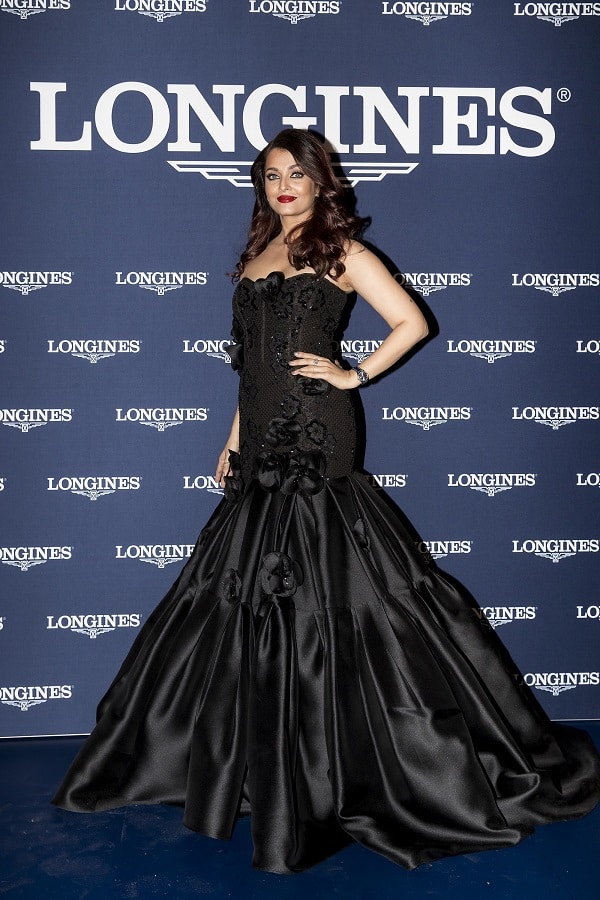 But very shortly after, as the grand clock struck 6:30, there was a loud cheer and to everyone’s surprise, ‘the queen’ was walking down the aisles of QVB.

As she sashayed in style towards the stage, she stopped briefly, only a few feet away from me, to wave to the crowd.

My heart almost skipped a beat, which is exactly when I realised what the words ‘star struck’ mean in the real sense! 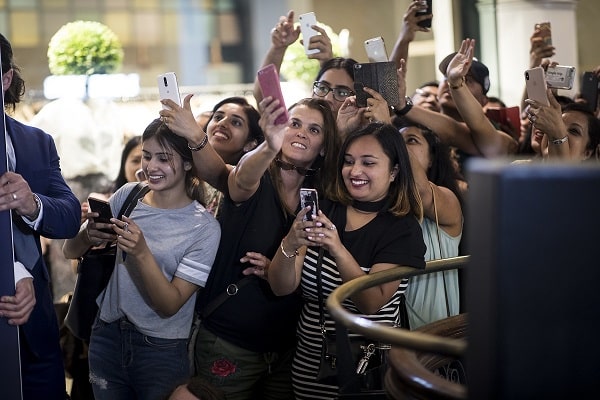 She blew kisses to the adoring fans who screamed, wide eyed and amazed by her stunning looks.

Yes, her beauty is amazing. And we swooned.

She looked impeccable – not a strand of hair out of place, not one pleat of her Gauri and Nainika dress out of kilter, not one wrinkled brow even as people thrust their camera phone at her.

The gathered media-wallahs, informed of the boundaries beforehand, still chose to disrespect the special guest’s privacy somewhat, and had her minders in a flurry. But it was not as bad and mad as the 2016 event, when the media pack behaved exactly like that – a pack. Either the security was better prepared this time round, or the reporters were better behaved.

And yet through it all, she remained graceful as ever, as though far removed from it in some divine sort of way.

When Aishwarya addressed the crowd the response was phenomenal, her fans clearly lapping up every moment, and furiously clicking away with their phones. She spoke politely, acknowledging the Longines Vice President and Head of International Marketing, Juan-Carlos Capelli, and the stunning athlete and model Amy Pejkovic, new ambassador for Longines. She also welcomed the Queen’s baton for the Commonwealth Games, carried to the event by Amy. Longines is the Official Timekeeper of the Gold Coast 2018 Commonwealth Games and Official Partner of the Queen’s Baton Relay.

Aish’s not-so-subtle comment that she would of course be cheering the Indian athletes at the Games in April this year, was received with big smiles and a loud applause!

She then proceeded to cut the ribbon for the official store launch, delighting the photographers and fans every moment with graceful waves and warm smiles. She looked picture perfect as she autographed her poster in store with the trademark ‘God Bless.’

Aishwarya may have stunned us with her grace and poise, but she truly won us over with her warmth. All requests for autographs were graciously accepted, and she was especially generous with kids, posing for photos as beaming parents couldn’t stop admiring and clicking. Some fans were overcome with emotion. One young man appealed to Aish to sign a sketch he had made of her, and she indulged cordially. 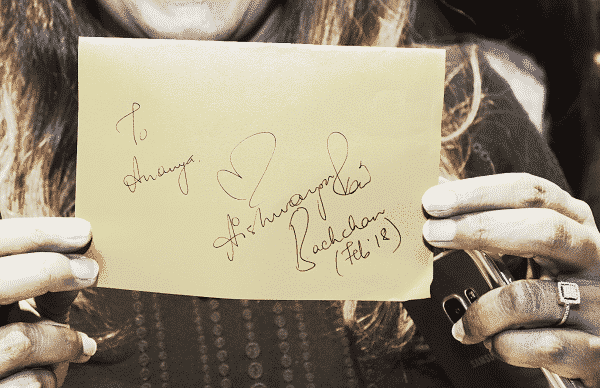 It was a privilege to be in the store with her as she treated a select few to selfies and more autographs. Amidst the white flowers, delicate finger food, oysters and crystal champagne flutes, as we got to mingle more closely, she came across as self-assured and confident, yet a warm human being – with good old-fashioned values like politeness and humility. I handed my little sheet of paper too as requested by my daughter and to our great delight she actually personalised her autograph with my daughter’s name! It is now going to be a keepsake for sure.

And in that, in a nutshell, is my take-away from my brief encounter with Aishwarya Rai Bachchan: that beauty is as beauty does. It’s a lesson I would like to teach my own two daughters – a lesson that perhaps millions of young women who idolise her could learn too. 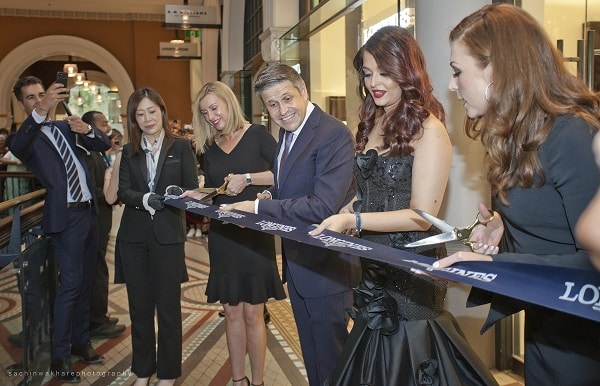 The event wrapped up neatly in 30 minutes, not a single minute more, very impressive indeed. The fans continued to scream, of course, and some even ran down the stairs in the hope of catching one last glimpse of her as she exited the lift. Security did the challenging task of constantly managing the crowd and even being appropriately forceful. The star’s popularity was evident and so was her down-to-earth, humble nature and love for children. Aish is an icon loved by generations and people were singing her praises long after she had left.

If ever there was a brand ambassador that stood up to the Longines tagline, it had to be her. Elegance is most definitely an attitude, elegance is Aish!

‘Explore Philadelphia from the comfort of your living room’