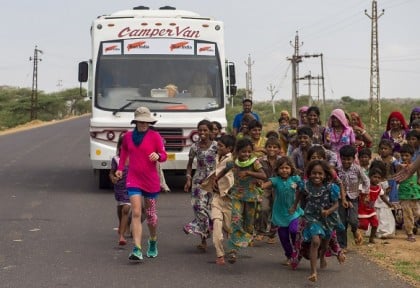 After an exhilarating 3200km run from west to east, across India’s tumultuous environment and climatic conditions, ultra-marathon runner Samantha Gash has successfully completed her expedition and campaign for World Vision raising $150,000.


Beginning her journey in the barren city of Jaisalmer in August, before trekking through the frosty prairie in the Himalayas to finish in the picturesque hill station of Shillong 76 days later, Gash experienced a combination of emotions, temperaments and mobility challenges.
Despite being confronted with many obstacles, including injury, intermittent weather, dehydration, stomach issues and poor air quality, Gash was able to push through and overcome these impediments as she remembered the essence and purpose of her run; to raise funds for World Vision Australia projects to help their facilitate better access to quality food, water and education in India.
“My constant source of motivation was having the perspective that no struggle I’ve faced in this run would come close to what many people in India experience on a daily basis,” Samantha said.

Through the ‘Run India’ fundraising campaign with World Vision Australia, Gash was able to visit 16 World Vision projects across India, and publicly address issues such gender bias, discrimination and underage marriage.
A cause particularly close to her heart was tackling barriers to quality education. She wrote on her blog while visiting a project in Barmer, “As we learned more from the World Vision staff about the challenges facing these communities, they explained the issue were not just education, but particularly the quality of education as the remoteness of this community can mean they are limited in what they can access.”
With the funds raised through the project, approximately 13,000 children will be able to access educational opportunities in multiple communities and regions in India for a year.
For Samantha, helping to create a difference in impoverished communities has been the climax of her endurance run across India.

“The focus of this project isn’t about running a large distance across India,” she said. “It’s been a chance to identify how individuals and the community can come together to overcome adversity.”
In addition to helping to create change amongst India’s rural communities, the connections that Samantha was able to forge with the locals were some of the most cherished moments during her trip.
“The community visits were some of the most powerful moments along this journey,” she said. “I was inspired by the strength of the women I met in Pauri and Lucknow; women who rallied their community together to devise initiatives to support those in need and establish small businesses. I was also confronted by my visit to a malnutrition clinic in Alwar. There I met ill babies whose mothers dealt with life and death issues relating to food security, lack of education and resources.”

During the run, Gash was joined by former South African Test cricketer Jonty Rhodes for several days of running, and for visits to local communities near Jaipur.
“I’ve seen in South Africa, especially around the Cricket World Cup, where we’ve given cricket facilities to communities that actually didn’t want them, they needed schools, they needed clinics, they needed assistance for kids’ education,” Rhodes said. “And that’s a key point of difference with what I saw from a World Vision point of view. For me, that is so important! Providing what the community requires, not what you think the community want. If it’s not coming from the community, and driven by the community, it’s not going to be sustainable.

World Vision Chief Advocate Tim Costello praised Samantha’s run, acknowledging the impact she has worldwide, particularly in India and Australia.
“Samantha began this epic journey with a deep desire to use her passion and talent to make a difference in the lives of some of the world’s most vulnerable children. Her completion of this awe-inspiring run across India is a reminder to us all of what can be achieved when we have determination and an open heart,” Costello said. “What began as one person’s dream has not only turned into a reality but has impacted the lives of many Australians at home; shed light on the issues of child poverty and education in India; and brought the stories of the ‘everyday heroes’ who battle adversity daily to our doorstep.”
While Samantha has accomplished a major physical and charitable feat during her trip to India, she still believes that the nation is in dire need of more altruistic and financial support for the indigent citizens of India.
“It has been powerful to see how the smallest things can help but empowering to realise how much more needs to be done.”
- Advertisement -
Share
WhatsApp
Facebook
Twitter
Linkedin
Previous articleStylise your look with a dupatta differently
Next articleMirvac launches new community in Donnybrook