Home Food A taste of India

For the second year in a row, Foodie Trails brought to us the Indian Festival at the Queen Victoria Market, filled with colour, music and as always, some pretty amazing food. 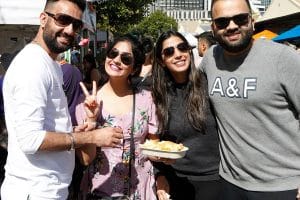 As you walked into the market you could hear a tune in the air, a call to you if you will, guiding you through the market to where the fun was… and that’s when the aroma hit. With those wonderful smells of masalas and chai, Queen Victoria Market – or a section of it – transformed itself into Delhi’s iconic Chandni Chowk.

All around were sights you would walk past on a regular Indian street, right down to the pani puri stall in the corner. 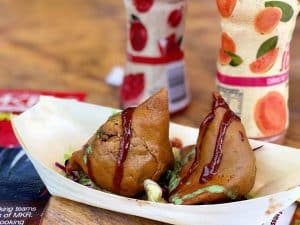 But this was Melbourne, and the food trucks were waiting. From just an entrée to a full blown meal to a bit of kulfi on your cheat day, this event had it all.

And then chai… oh, how the chai was enjoyed, given the cold and wet weather!

This year the weekend-long festival – part of the Melbourne Food and Wine Festival – was bigger, attracting some better-known food names. Two Fat Indians, Babaji’s Kitchen and Kailasa were there, as was the Original Chai Co and new kid on the block Chuana. 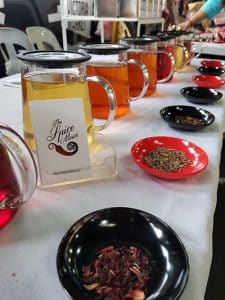 A surprise drop in was Chef Saransh Goila of Mumbai, known as the “world’s best butter chicken chef”, brought out to Australia by MasterChef celebrity George Calombaris to open a pop up.

All of these elements made the VIP Foodie Experience a must-try, with its special tasting menu and designated service area.

The VIPs, they came too: Rakesh Malhotra, Acting Consul General of India (Melbourne) agreed to inaugurate the event, and the City of Melbourne, event supporter, deputed Councillor Beverley Pinder to attend as well.

“It was a weekend that was dominated by Cultural Diversity Week events. Victoria’s Multicultural Festival was on at Federation Square, as was the Dandenong World Fare, and of course, the Grand Prix was a major event city-wide,” she told Indian Link. “And to top it off, the first of the two days saw bad weather! But in the spirit of the festival all the vendors stayed put, in the cold and the wet!”

No Indian festival, even one dedicated to food, is complete without other moods of India, namely the music and dance, and the bling and the glare. 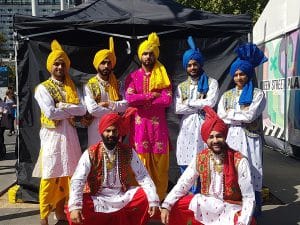 Community favourites Naach Box delighted with their dance moves as the eager crowds joined in the jhataks and mataks. Raanjhe Bhangra’s rambunctious folk beats lifted the spirits like only they can, and the melodic sounds of The Fifths reached out to the desis with their versions of all-time classic hits.

And the sari-clad stilt walkers? Yes, they were definitely the first ever in the country! 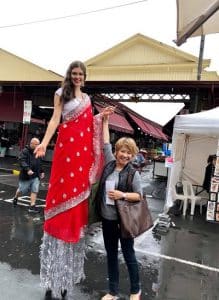 What started off as a cherished dream for Himanshi Munshaw-Luhar, looks set to be an annual event today.

Plans are afoot already for next year, Himashi reveals – and the date is set for Diwali, India’s very own “silly season” in which food takes centrestage. The sweet sensations of Diwali: coming to the Queen Vic in 2019!