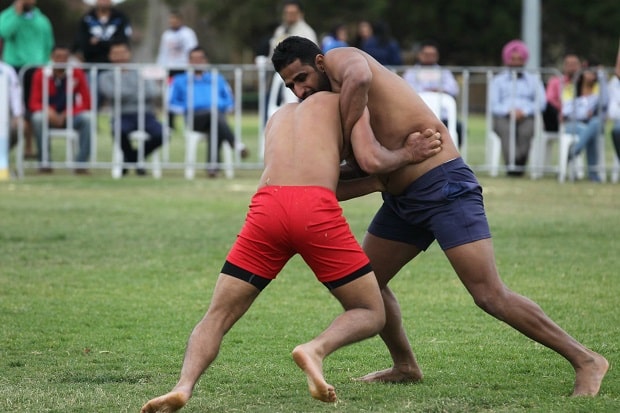 If you are of Indian origin and even if you’re not particularly interested in sport, you would be familiar with the game of kabbadi. This strenuous sport is still played enthusiastically in India, and for the third year running it was played in Melbourne at the Brimbank Kabbaddi and Indian Cultural Festival at Errington Reserve, St Albans on March 16.

This annual festival brought together the Punjabi community to watch teams play to win the crown, as well as to celebrate north Indian culture

An enthusiastic crowd of 4,500 people witnessed the intense competition with host and favourites SSSC looking to defend its title, but they lost 40.5 to 40 in the final to a determined Brisbane team led by captain Lad Johal.

“What an amazing final and I can’t believe we won this tournament over the always strong Singh Sabha Club. Thanks to the organisers and sponsors for making us feel so welcome”, said the visibly excited Johal.

The award for ‘Most Valuable Player’ was Sony Kaunke from SSSC who said, “I congratulate Brisbane on their victory in such a tight game in a great atmosphere. We look forward to next year”.

Masters of Ceremony Charnamat Singh and Ranjit Khaira performed a dual role of keeping the crowd in good humour while providing expert commentary on the kabbadi action. The President of Craigieburn Gurudwara, Kulwant Singh attended the event which was officially opened by Maria Mamvakiniou, Federal MP for Calwell, and closed by Chin Tan, Commissioner, Victorian Multicultural Commission. Various dignitaries also graced the occasion, with representation from the Indian Consulate of Melbourne, the State government of Victoria, Brimbank Council, Victoria Police, and the Metropolitan Fire Brigade.

The crowds at the event were also entertained with joyous bhangra dancing, traditional music and poetry from Babal Rai, Jassi Gil and Dadhi Jatha. The Punjabi movie industry was represented with stars in attendance, including Raj Kakra. Delicious food was provided by volunteers from the Craigieburn Sikh Temple while children enjoyed a variety of activities like face painting, a trackless train, a jumping castle and sports clinics run by the Melbourne Victory and Essendon Football Clubs.

“What a thrilling finale to another great event and congratulations to Brisbane Kabbadi Club who showed great heart to win. A special thank you to our volunteers, Brimbank Council, all of our sponsors and we were thrilled to launch SSSC’s new partnership with Moneygram at the event”, said SSSC Secretary General Ajit Singh.

“I have been involved with the SSSC for the past 16 years but this event has been the best”, stated SSSC Club President Tejpal Singh Dhillon, also acknowledging and thanking sponsors and members for making the event possible.

Established in 1994, Singh Sabha Sports Club (SSSC) is one of the oldest and proudest Indian sporting clubs in Australia. SSSC has contributed enormously towards helping the Punjabi community to better integrate into Australian sport and culture while still maintaining traditional and cultural values.