Bhai’s Guidebook to the AFL 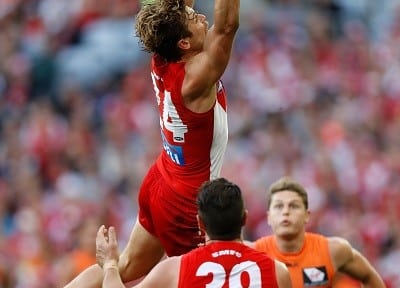 As enticing as it is to watch a sport which constantly displays ridiculous feats of athleticism, knowing how the AFL is actually played is quite handy! Indeed, when my brother (bhai) decided on my behalf that we were now going to follow AFL (the younger sibling scarcely ever gets a say), I was simultaneously impressed, but confused. My four-year-old brain tried to make sense of what was lit up on the television screen; a bunch of huge players sprinting around a massive field, competing to grab an egg shaped ball and kick it between what looked like some oversized white toothpicks. I was later helpfully informed that these were in fact goalposts.

Acknowledging my lack of understanding and grumbling away younger siblings lacking in the intelligence department, bhai began to break down the basics of the AFL for me. I’ve tried to recall his explanation of the game to me from all those years ago and extracted below what I call ‘Bhai’s Guidebook to the AFL’.

An AFL match is not divided into two halves like a typical game of soccer or rugby. Instead, it is divided into four quarters with each quarter having a duration of 20 minutes. Why four quarters and not two halves? Bhai’s reasoning to four-year-old me was that just like four gulab jamuns are better than two, four quarters makes for a better game. Like most sports, the winner of the match is the team with the most points on the scoreboard at the end of the fourth and final quarter.
However, point scoring in AFL is somewhat different to many other sports associated with ‘football’. Each end of the field has four goal posts with the middle two posts being significantly taller than the two outside posts. The players compete to kick the ball between the larger two goalposts. If they do so it is a ‘goal’ and the team is awarded with 6 points. Should the ball either hit the post or go in between the outside posts, it is a ‘behind’ and the team only receives 1 point. With players frequently kicking massive goals, sometimes from over 60 metres out, and from some of the most insane angles defying the very laws of physics, the game is never short of raw excitement.

AFL is a game full of big kicks, hits and big plays. In order to make their way up the field and get within range of goal, players attempt to string together a series of ‘hand passes’ and ‘marks’. Where in rugby the ball is thrown to one another, AFL players punch the ball out of their hand to make a pass and the pass can be made in any direction; this is called a ‘hand pass’.
‘Marks’ are one the most spectacular aspects of the game. Put simply, if the ball is kicked over a distance of 15 metres and caught by another player it is a ‘mark’. This allows the player to have a free kick and take some time to decide where to pass/kick the ball without being tackled by a player of the opposing team. Naturally, taking a ‘mark’ is particularly advantageous and results in some incredible competitive catches throughout the game. Think about ‘classic catches’ from cricket and now throw in huge players leaping off the backs of one another to jump several metres in the air to take nothing short of the biggest and best ‘screamers’ you’ll ever see.

If a player has the ball, they sure as heck better start moving quickly unless they want to fall victim to a tackle. However, with AFL being a fast paced and constantly active game, being tackled does not necessarily mean there is a break in play. Instead, if a player is tackled they are obligated to attempt to ‘release’ the ball by kicking or hand-passing it away. If the player is judged to have been able to release the ball and chose not to, the other team is awarded a free kick. If it is determined by the umpire that the player had no prior opportunity to pass off the ball, then the umpire will take the ball, throw the ball up between the two players and the game continues.
I can imagine that the information provided in Bhai’s guidebook can be a little overwhelming if you’re new to the game. New rules, new strategies, new players. But if four-year-old me could use Bhai’s AFL Guidebook as a springboard into a new and exciting sport, so can you! One thing I can promise you is that you will not regret it!
Watch this space and continue to join Khushaal for all things AFL in 2017!
To read Khushaal’s next article click here.