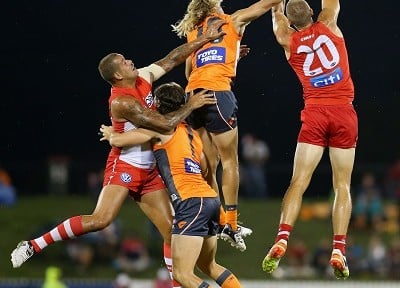 Choosing your AFL team is a relationship as sacred as marriage

In every sport, there comes a time where you must make the ultimate decision. It is a decision that changes everything. A decision that you must take ownership of, whether or not your friends and family approve of your choice. A decision that is a lifelong commitment. Yes, choosing a team to support is very much like the concept of marriage. There will be times where you will be completely in love, other times where you will be angry when the team enters a losing streak. But, for better or for worse, your team (or your other ‘significant other’) will always be your team. Choose wisely.
Luckily, in Sydney we have two to choose from. Even better for us, both have proven to be amongst the best in the league; the high flying Sydney Swans and the mighty Greater Western Sydney Giants.

Until 1982, the Swans were actually known as the South Melbourne Football Club. Following their relocation to Sydney, they became the very first AFL team to be based outside of Victoria.
In 2005, the Swans finally broke their 72-year premiership drought and subsequently have played in the Grand Final in 2006, 2012 (Premiers), 2014 and 2016. In fact, they have fallen outside the top eight teams and missed the finals only three times since 1995.
The Swans have been represented by some of the AFL’s most well-known ambassadors. The likes of Adam Goodes and Michael O’Loughlin have not only been prolific players, but also inspiring advocates for Indigenous Australia. New recruits such as Aliir Aliir, who came to Australia as a refugee from Sudan, are a reminder of not only the diversity of the AFL but Australia as a whole. With the AFL celebrating these values through the ‘Indigenous Round’ and ‘Multicultural Round’, Sydney has always and will always play a key role in the promotion of such values.

The GIANTS are the new kids on the block, but bursting with talent. With the AFL constantly expanding its massive viewership, Western Sydney is now represented on the biggest stage in both men’s and women’s AFL.
The GWS GIANTS only played their first season in 2012 and it was expected that it would take several years before such a young group could match the established teams in the AFL. Yet, only four years later in 2016 the GIANTS finished in the top four of the competition and made it to the semi-finals. With the squad boasting some of the most prodigious young talent in the form of star forwards such as Jeremy Cameron and Toby Greene backed by the experienced midfield and a defence led by Heath Shaw and Shane Mumford, the GIANTS are set for a huge 2017 and are eyeing off their first premiership.

Having been a Swans supporter since childhood but living in Western Sydney, the new two Sydney team model has me torn somewhat. But like me, it’s time that you made your choice and take your vows. The 2017 season is only just around the corner…
To read Khushaal’s next article click here