What does it take for the English-speaking world to realise that Indian movies are not just about Bollywood? Well, here is a step in the right direction.

Corrie Hinschen, a Brisbane-based Australian movie critic, has decided to look largely beyond the song-and-dance films from India and explore parallel cinema and regional cinema, especially from South India.

Masala Bollywood films captured the attention of the Western world long ago. The best outcome of this was that the films changed the perception that India was a country of elephants and snake charmers.

Having said that, there is no denying that regional cinemas in India have a huge following of their own, particularly because of the quality of these movies. However, outside India, they have not had the same kind of reach that mainstream Hindi movies enjoy.

This is where Corrie comes in. He is a YouTuber, who reviews Asian movies from South Korea, Japan, China, Hong Kong, Indonesia, Taiwan and India. He broadcasts the reviews on his channel, Pieces of Work, which has around 35,000 subscribers. South Korean films, he says, are his bread and butter. “However, I adore Indian films as well,” he says.

Of the 51 videos on Indian movies Corrie has made so far, 29 are Hindi film reviews (very few of these are the mainstream type), nine are on Malayalam films, three on Tamil, four on Telugu and two on Kannada films. 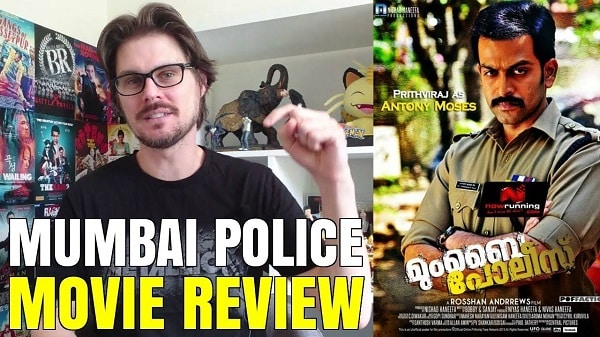 “It is the necessity of regional cinema to compete with the multimillion dollar industry called Bollywood,” Corrie says. “This requires them to make these extraordinarily good movies.” The best part is that Corrie reviews these movies in English, which introduces them to an English-speaking audience as well.

Living in Australia, and not speaking any of the Indian languages, how does he decide which movie he should review? “My keen audience plays a part here. I take suggestions, and sometimes even run polls to determine which movie I should watch next,” Corrie explains.

Asked to pick his favourite movie from all the Indian movies he has reviewed so far, his choice is Mumbai Police, a thriller in Malayalam. Quite familiar with the actors and actresses from these movies, he picks Prithviraj, a Malayalam actor, as his favourite. On a lighter note, it takes Corrie a lot to even try and pronounce his name; but he has no trouble endorsing his acting.

But his reviews aren’t just full of high praise. “I do have very strong opinions about what happens in India in reference to the movies that are made there,” he says. Corrie’s recent review on Padmaavat is a great example.

He does not shy away from stating that the movie lacks soul, and as he does it, touches upon some pertinent social issues. It is interesting that someone who has never been to India, and hasn’t had first-hand experience of its culture, has formed an idea about the country’s way of life and society just by watching many of our movies. And that includes some grim realisations as well.

Yet another relevant issue that he addressed recently was the plagiarism in Indian movies. In his video titled India, We Need To Talk About Plagiarism, he rips apart some plagiarised Indian movies.

“This inadvisable trend of plagiarising – euphemistically referred to as ‘inspired by’ – will undermine the value of the great movies that are made in India. I will continue reproaching this trend unless it is discontinued,” he says in the video.

Corrie may well be the only Australian who reviews South Indian movies in English, and these reviews have been viewed between 10,000 and 56,000 times.

For good regional films, this could serve as a launch pad to the English-speaking audience in Australia, and thanks to the power of the internet, to the wider world.

Of migration and mysteries