Gurpreet Singh Sandhu, goalkeeper for the Indian national team has been training in Sydney with his Bengaluru FC teammate and Socceroo Erik Paartalu AYUSH AYUSH and RHEA L NATH report 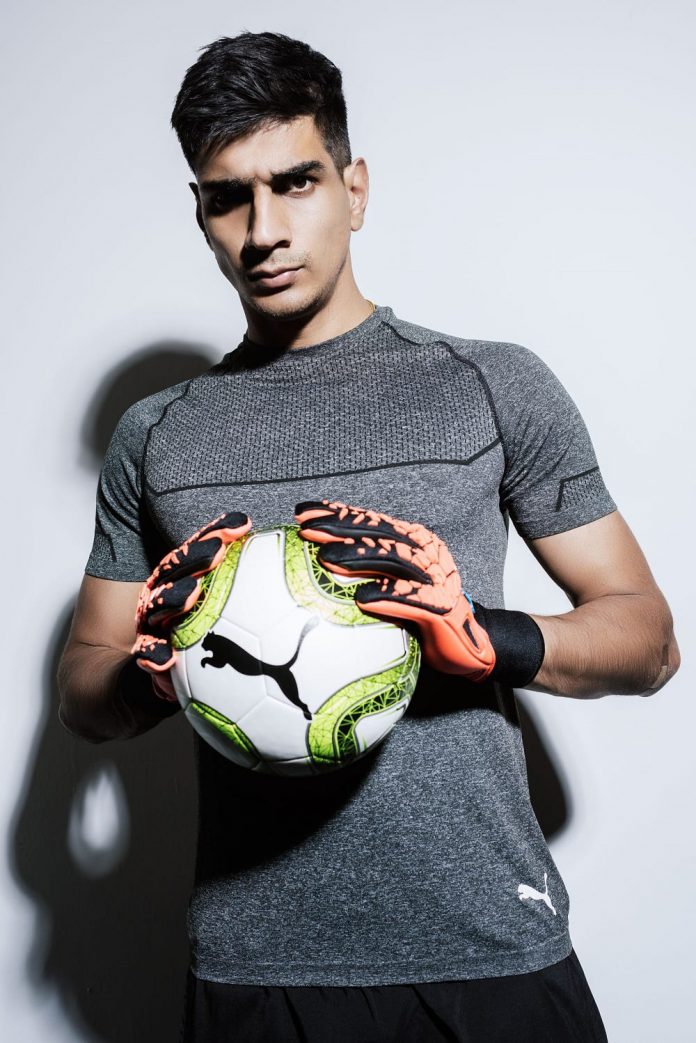 When news of international travel bans and lockdowns reached Gurpreet Singh Sandhu, goalkeeper for the Indian national team and a professional footballer, he was left with a quick decision to make – where should he ride out the pandemic?

He happily chose Sydney, a place he calls his second home given his partner lives here.

“This is the third time in the last year that I’ve visited,” Gurpreet told Indian Link. “I love the expansiveness of Sydney and how beautiful it is. Luckily my Bengaluru FC teammate, Socceroo Erik Paartalu is also from here and we have been able to get together on numerous occasions to train.”

Around the world, the sports landscape has changed due to the pandemic. For Sandhu, the fight against COVID-19 has a personal connection – his parents are frontline workers.

“Both my parents are police officers in the Chandigarh and Punjab Police, and their safety is very important to me,” he related. “COVID-19 has been a bump in the road for the whole world, but it has also given us a chance to stop and realise how important life is, how we shouldn’t take it for granted, how our actions have affected the planet.”

Meanwhile the football world tries to limp back to normal, with Bundesliga returning and La Liga and Premier League planning to come back soon too. Sandhu agrees with such measures if nations manage to control the spread of the virus and flatten the curve.

“It will give a sense of normalcy to people around the world. But I urge sports enthusiasts to stay home as much as possible and maintain social and physical distance. Sports is not the biggest priority right now, people’s lives are,” he said.

He added, “I think a lot of new measures will come in place in the game, on how to minimize contact. Perhaps playing indoors for a while, no handshakes, changing of kits at half time etc may become the next normal for the time until we have a cure for the virus.”

In September last year, Indian football fans were glued to their screens for an exciting World Cup qualifier – India facing off against Qatar, the Asian champions, on their home ground.

There were many close calls and near misses, and all eyes were on India’s goalkeeper. Largely due to Sandhu’s clutch saves and one of the best performances of his career, this game made India the only team after Brazil, Argentina and Colombia to have kept a clean sheet against Qatar.

“We had nothing to lose when we went in,” Sandhu recounted. “They were the champs playing on their home ground. All we had to do was play the best to our abilities, and every one of us did.” He had worn the captain’s armband in a game that was one of the sporting highlights of 2019.

Last year was a remarkable year for the 28-year-old, who enjoyed another successful club campaign with Bengaluru FC, his second consecutive Golden Glove win, and being awarded the Arjuna Award for his outstanding achievements in Indian sports.

“To receive the Arjuna Award was a great moment for me and my family and winning the Golden Glove twice in a row makes me want to work even harder.  It’s easy to get to the top, but difficult to stay there – and I want to stay there!” Sandhu said with a smile.

Ever since his first taste of professional football with East Bengal as a 17-year-old, Sandhu has made remarkable strides. In 2016, he became the first Indian to play in the UEFA Europa League, describing his time with Stabaek Fotball in Norway as “three unforgettable, career-defining years.”

“Those were the best days of my career, and to be able to be there for three years was a blessing. I learned so much about the game and about myself, and it gave me my most important weapon – mental strength,” Sandhu recalled.

As a child, the football star followed former Manchester United goalkeeper Edwin van der Sar and Indian goalkeeper Subrata Pal. What does he think the game can contribute to youngsters and their development?

“In today’s world where kids are surrounded by gadgets, it’s even more essential to incorporate sports activities,” Sandhu replied. “I learned team bonding, caring about the person next to you, and how to cope with losing and winning through sports.”

Enjoying his time self-isolating in Sydney, the Indian player sees a great relationship between the two countries. A lot of Australian players, such as Tim Cahill and Erik Paartalu play in the Indian Super League (ISL), and the Indian hockey team is being coached by Australian legends.

“Both nations have pushed each other to excel in whichever sport they meet up against each other and with that bond, now we see Aussie players and coaches plying their trade in India,” he said, “Maybe someday we will see some Indian players playing in Australia!”

I think all of the teammates that I have in club and country are my favourites; I cannot pick one. The opponents I like facing with India are the best teams Iran, Qatar. In the ISL I love playing against Goa, ATK and Chennai

In the last one year, I would say Qatar vs India

Sunil Chettri telling me where the penalty was going to be hit through his assumption, and me then saving it, when we played against Hyderabad.

Most difficult player you have faced?

Favourite goal you have saved?

The penalty against Mumbai City

Favourite crowd/stadium to play at?

Kanteerava in front of the West Block Blues