What She Wants: Talking feminism, society, and family – Part II 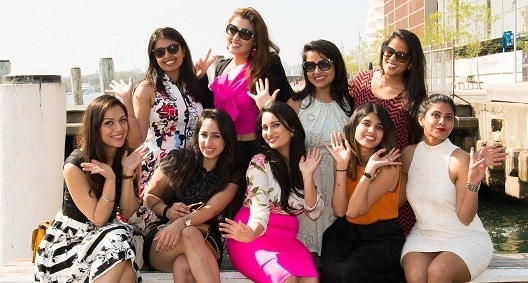 What about the status of women in society? Do you consider yourself a feminist?

Naina: It’s almost gone from women having no choice, to women having too much choice. Now, suddenly, it’s all about feminism and being powerful, but, if I use myself as an example, I am literally leaving everything behind to go and be with a man. But I am a woman at the end of the day and I want to spend time with my family and my children. Even though I want to be a high-flying CEO or something, I don’t want to do that at the risk of my family. It’s up to me to find the balance. Someone told me recently, ‘You can have everything, just not all at the same time’.
Ananya: Feminism to me is equality. I don’t want more than a man, but I want to be treated as an equal.
Sharika: Let’s say you get married and have children, and after that you decide you then want to focus on your career. How kind are employers and organisations in letting a woman go back to work and have a family? Most of the time, they’re not. That’s where it gets really difficult for a woman to make that choice. And when she does try to find that balance of career/children/husband something does suffer. How understanding are men in supporting that?
Simmi: I’m pro-equality. I was always of the view you have to do everything equally. You have to do what makes you happy. I have friends now who are starting to have children, career girls who are managing it in such diverse ways. You don’t know until you actually have a kid. You think you might be something, but it might be totally different when you have that baby in your arms. I’d like to be able to do both, work and take care of my children. It’s about identity as well. A lot of my friends have said they don’t want to be known just as so-and-so’s mum or wife. They had a career and a life before. It’s such a personal choice.
Geeti: With the type of job I am in, my kids would not have a mother figure. I would want to stay with my kids; I want to know them and I want them to know me. I want to grow up with them. I don’t want to put myself in that box. Recently I hit a point thinking ‘I haven’t achieved anything’ but I have, it’s just not what I expected.
Neha: A lot of it depends on how supportive your partner is. I have been through phases where I’ve thought I just want to settle and be a housewife. Even when we have conversations about kids, my husband says ‘Whatever you want! If you want to stay home, if you want to work, we’ll work that out. I’ll support you 100%.’ Having a supportive family and partner makes such a difference.
Geeti: So many of my friends are working in high flying positions, but they only see themselves there for five to ten years. They eventually want to quit. They don’t want to be there forever. Even though they’re associated with the top 6 or top 4, they just want to get that on their resume, build a profile and then go off and do their own thing. I’m so not for feminism, it’s not equality any more and women seem to want more than the men. Tradition is important. Women are women for a reason, and men are men for a reason.


Simmi: There are definitely differences. Sometimes we as women are not as confident in ourselves. When I launched my start-up, for example, the amount of times I had self-doubt, because it’s just you all alone…  I think my poor partner really had to put up with that and finally he said, ‘Just put it out there because what’s the worst that could happen…’ I am so surprised now by what’s happened!
Sharika: Why do women have that self-doubt?
Ananya: I think men do too, they just don’t talk about it. Men might know less, but they pretend they know more.
Annie: I think we’re all human and everyone has doubts. Everything in life is a risk.

Would it matter to you if your partner earned less than you?

Naina: I have been brought up to always be financially independent. If things go wrong, you don’t want to be dependent on anyone or have to sacrifice, or compromise or settle just because you have to. For me, moving to Amsterdam is not a financial decision. It’s because it’s the practical thing to do. My job is more flexible.
Sharika: Sometimes I feel I want someone who’s more ambitious, more driven so I’m driven along with him… and then sometimes, I don’t care. But then the issue is, can the man handle the fact that I’m earning more? Most of the time the answer is no. That’s when the problem arises.
Ananya: It depends why he earns less. If he’s just not ambitious and doesn’t share the same values or goals and that’s why he’s not earning more, that’s incompatibility.
Annie: Ultimately it comes down to the values you have and if you share those same values.
Naina: For me, it’s not about who’s earning more or less. We’re a family. Suppose I get a better job, and I earn a bit more than him, as long as he’s okay with that, I’m fine. The money is going to us! Both people have to be equally flexible in the relationship.
Geeti: It’s your money together. You’re going to have to consult each other about big financial decisions. It’s a very Indian mentality to say a guy should be earning more.
Annie: It’s an international mentality.

What’s your family situation? If you have brothers, do you feel as though your parents have ever favoured them?

Annie: Yes, thought I think that’s largely because my brother’s much younger.
Sharika: My brother is 11 years younger than me and there is such a stark difference between how my dad treats my brother, and me and my sister. My mum treats us all equally but my dad definitely treats us differently, definitely because of the gender, not the age. It’s in the way he speaks to us, the attitudes.
Ananya: I have three parents. Seriously, my brother is worse than my parents! He’s four years older. It’s bad. I can lie to my mum and dad, but my brother knows because he told the same lies! I can’t get away with anything. I’ll be at a party and some guy will talk to me and he’ll go up to them and be like, ‘That’s my sister, don’t talk to her.’

What are your thoughts on moving out of home?

Online abuse: How you can protect yourself and your community