By PAWAN LUTHRA and RAJNI LUTHRA.

An Indian Link election survey conducted midway in the election campaign has had the two leading political parties – Australian Labor Party and the Liberal-National Coalition – at the same level of support from the community.

If these numbers can be extrapolated nationally, then on the evening of election day May 21, neither party will form government in their own right, and the preference flows from the Greens and the Independents could decide who will take the reins in Canberra.

One thing for sure, though, is that PM Morrison’s curry night selfies on social media have turned more people off than brought in supporters. The food posts did not go down well with 23 per cent of the respondents, who said that they are less likely now to vote for him, as compared to 8 per cent who have a positive view. For most respondents though, it made no impact. “Let the man cook, if he wants to,” wrote one respondent, as a comment on the survey.

Let’s put things in perspective as to why the Indian community in Australia is being so heavily courted by all the political parties.

Firstly, it’s the sheer numbers. Currently 750,000-strong (though not all are eligible to vote), the community is growing rapidly, expected to touch the million mark when the Census results are released later this year. That the bulk of the community lives in marginal seats makes it a no-brainer that the leading politicians are drawn in.

Also, the new migrant is quite young – with an average age of 35, high levels of education, and a good understanding of the importance of elections and the power of the vote, having been brought up in a country like India.

But herein lies the dilemma for the new migrant. Those who migrated here and became citizens in the last, say, eight years, will have seen a Liberal Conservative government in India under PM Modi. This intersects largely with the time of a similarly attuned Coalition government in Canberra, mostly under PM Morrison. And yet as new migrants, education and healthcare are uppermost in their minds. Stretched financially, they rely on public education and health systems, and see the ALP as better responding to these needs. So, Indian-origin voters have the potential to swing both ways – and yes, they have been known to progressively change over the length of their life in Australia.

A substantial portion of the sample were those that have lived in Australia for over 20 years (55 per cent), while 25 per cent reported they have been here for 11-20 years.

The genders were skewed, with more males than females (67 per cent and 30 per cent respectively, the rest falling in other categories).

ALP vs Coalition, Albanese vs Morrison

The Indian-Australian sentiment seems to be mirroring that of the mainstream, which is currently reporting a dead heat though the ALP seems to be gaining momentum.

The interesting observation though, is that despite this even split, there is an overall confidence in the Australian Labor Party on a number of issues of concern.

On subjects such as better engagement with the Indian-Australian community, better immigration policies, even the handling of cost-of-living pressures, the ALP saw more support than the Coalition.

Regarding better engagement with the Indian-Australian community, Labor came out ahead with 49 per cent of the votes; the Coalition took 45 per cent and Greens 6 per cent.  A notable comment was, “Once again, no party has the vision or maturity to lead ethnic communities. History is evidence, please check how much any party has done of substance. They only solicit votes to get elected so that their future is safe.”

On the issue of better immigration policies, more than half the community supported the Labor Party, while 43 per cent of the vote went to the Coalition. Interesting to see the rise of the Greens here, with 7 per cent support.

Also interesting, is the response to the question on cost-of-living pressures. While the Liberals have been making this a highlight of their campaigning and selling themselves as better managers of the economy, the respondents in this survey chose to believe otherwise.

55 per cent said the ALP will do a better job of handling cost-of-living pressures.

Point of note: this poll was conducted during the week the Reserve Bank of Australia increased interest rates by 0.25 per cent. Also noteworthy is the fact that prices have shot up significantly in recent weeks, which the Coalition is explaining off as a response to global pressures following a war in Europe and the after-effects of the pandemic.

These factors may have led to the respondents challenging the Coalition spin of being better economic managers, opting to go with the ALP instead.

Despite this support, the ALP was not able to see a stronger fall of the vote in their favour as the preferred political party.

The lack of a clear-cut choice for PM warrants a somewhat deeper analysis.

One could call this in Anthony Albanese’s favour: the Prime Minister has had many years to win the trust and faith of the Indian Australian community and a draw for him is as good as a loss here.

At the same time, could it be said that perhaps Anthony Albanese should have done more to present himself as a capable leader? It looks as though while there has been a vacuum left by ScoMo to better engage with the community, Albo has not been able to grab the opportunity to make deeper inroads.

Two questions specific to the Indian community were raised in our poll.

One of these related to the Prime Minister’s frequent curry nights on social media.

The constant barrage has emerged as a flashpoint with about 23 per cent of respondents, who reported that they are now less likely to vote for Scott Morrison. 8 per cent of the respondents though did say that the curry posts had a positive impact on their voting intentions. (One cheeky comment suggested that perhaps Scott Morrison should participate in Indian Link’s MasalaChef 2022 competition.) An overwhelming majority of 69 per cent reported that Morrison’s curry habits had no impact on their voting intentions.

The second Indo-specific question was on the government’s border closures, especially with India at the height of the pandemic in early 2021 and threatening returning Indian-Australians with imprisonment and hefty fines. The dismay in the community was well reported, with the rhetoric coming out that the government would see a backlash at the hustings.

It is rhetoric that has seen some, but not overwhelming, support.

Perhaps the Indian-Australian voter is appropriately discerning, not swayed by such posturing. When it comes down to action, the decision is made by factoring in relevant information, assessing alternatives and weighing the evidence.

(Indeed, one respondent wrote, “Wearing saris or achkans, greeting with namastes, and showing off your curry skills make for some great social media posts. They may be liked and shared by hundreds each time, but that’s all they are – social media posts.”) 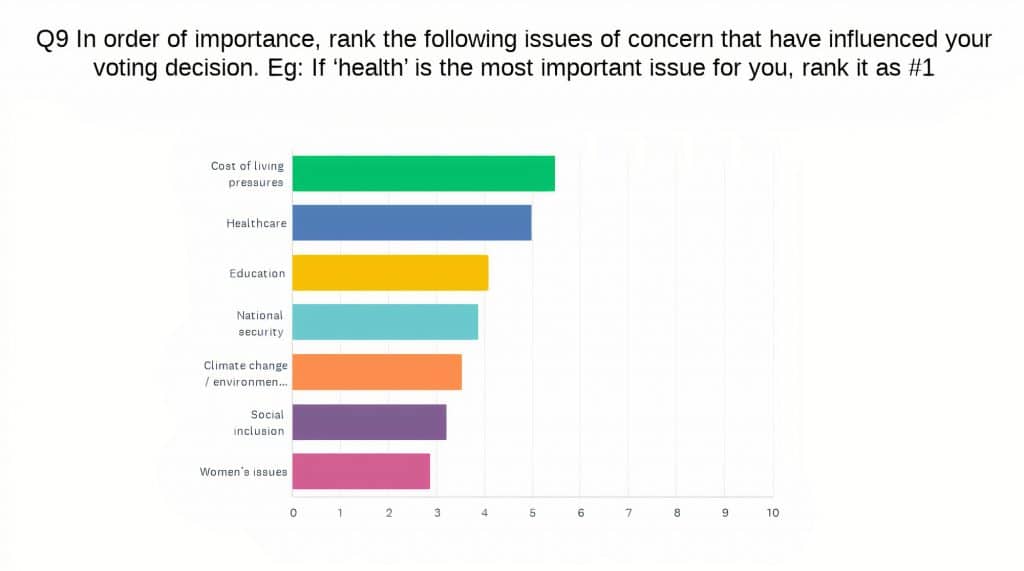 Issues of concern: Cost of living tops the list

As expected, cost of living is highest on the mind of the Indian-Australian voter.

Healthcare and education follow at numbers two and three. These three issues directly affect the hip pocket, and as largely first-generation migrants with limited financial means, better access to good healthcare for the older respondents and good education for the more recent migrants, are paramount. National security for Indian-Australians was less of a concern: coming from India which sees border skirmishes frequently as well as insurgency within, the safety in their new home seems to take at least that issue off their minds. The fact of growing international tension militarily, some of it in our own surrounds, has perhaps not hit home yet.

This is unlike the constant clamour about climate change, the dangers of which our social narrative has finally begun to take notice of, and with greater frequency.

Environment concerns stood at number 5 while social inclusion and sadly, women’s issues brought up the rear, a year after #March4Justice rallies took place across the country. Now on the campaign trail, both parties continue to field questions on their plans to make Australia safer for all women, most recently poked at the second leader’s debate to ‘define a woman.’ Perhaps one might be tempted to blame this low rank on a skewed gender ratio in the survey, a sobering thought when advocating for women’s rights should be a gender-neutral issue.

The issue of a federal integrity commission, too, came up frequently in comments. “It will be terrible if corrupt practices creep into the system with outcomes as one sees in countries such as India,” one respondent observed.

In summary, it seems neither party or leader has cut through or outdone each other in the Indian Australian community. As one jaded respondent noted, referring to a rise in divisive politics this past year, “there is no united Indian community in Australia, so… no one [party] can do any good to the community.”

But with the last few days of this campaign still to play out, it is a good time for both leaders to reach out and talk to this strong and influential voting bloc. The keys to the lodge may well rest with the Indian diaspora.

With input from Rhea L Nath

READ ALSO: What will young Australians do with their vote?