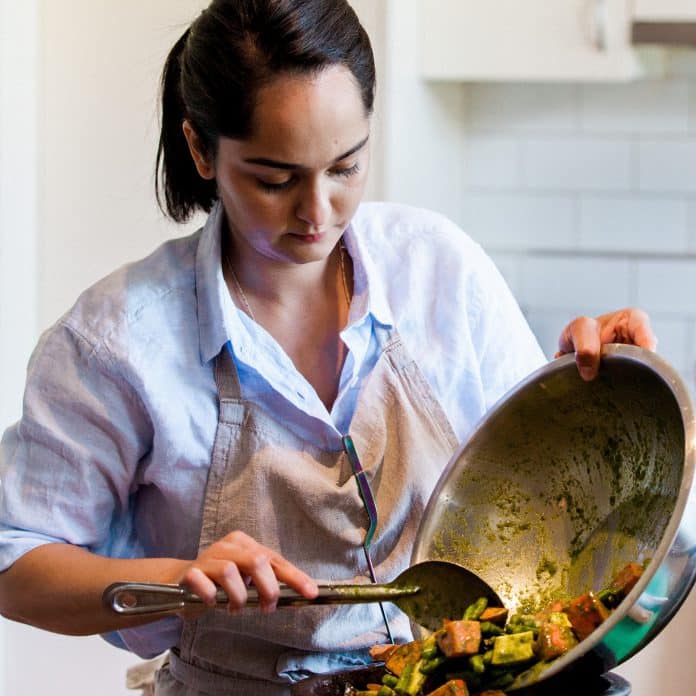 With the heightened need for more inclusive dining options, Melbourne-based foodie Helly Raichura’s unique concept EnterViaLaundry (EVL) sets an example of how to dynamically incorporate vegetarian food into Melbourne’s dining landscape. In late 2017 when Helly Raichura opened her suburban home in Melbourne to guests willing to indulge in fine Indian cuisine, meet fellow gourmands and experience the magic of vegetarian dining, it was a tentative exploration into the world of pop-ups.

Little did she know that in no time the waiting list of experiential diners wanting to try her innovative concept would reach 800 and counting. Couple of hundred have already booked seats recently. Her intimate gatherings of 4-6 have now turned into a table of 10 and she is fully booked for every weekend till mid-December.

“This whole journey from cooking as a hobby to cooking for strangers evolved organically,” said Helly as she shared her story with Indian Link. “This was never meant to be a source of income for me, it was more of an outlet for my creative juices as cooking and playing with food has always been my happy place.”

An inherent playfulness is reflected in all of Helly’s choices, including the quirky entrance to her famous open plan kitchen. Guests are ushered into the dining area through a side door of a room that hosts her washing and linen.

Helly laughed as she explained how it came about. “One day my husband and I were cleaning our backyard in preparation for dinner but it took us hours to get anywhere. Initially, we were looking at taking people in through the large doors in our backyard however it would need to be cleaned and the lawns manicured every time. The laundry door was a much better alternative as easier to manage and clean. That’s how EnterViaLaundry was born.”

Helly’s food tells a story about her journey in life, originating from India to finding home here in Melbourne. She migrated to Australia in 2007 to study Human Resources. She met and married Vishal, who is an accountant (CPA) by profession and they have a son who is now five. She currently works as an HR specialist for a corporate firm.

Helly claims she has no formal education in commercial cooking. She was tempted to study cookery when she migrated, however, a ‘reverse feminism of sorts’, at that time, compelled her to not pursue a vocation that was stereotypically considered a man’s domain as a profession and a woman’s lot at home. Instead, she took up a totally different profession that she loves equally and has no intentions of quitting.

She learnt to cook by osmosis and then continued to hone her passion over time. Cooking was a hobby that helped her to relax. When she decided to cook for people, on popular demand, she never expected things to take off at the speed they did.

The food she ate growing up in India plays a huge part in what Helly serves today. “I belong to a Vaishnav family from Ahmedabad in India and for as long as I remember, vegetarian food has always been the centre of everything for us. We spent a lot of time on farms, picking fresh produce and both my mother and grandmother were passionate cooks. My mother was focussed on sourcing quality ingredients and my grandma had a special interest in acquiring new recipes and techniques to sustain her catering business for office workers”, she said, sharing her early childhood influences.

Under the sound tutelage of Shane Quade’s kitchen Lûmé and Gaggan Anand’s eponymous restaurant Gaggan in Bangkok, Helly learnt to master the different elements that combine to create a culinary creation. From techniques, flavours, temperatures, aesthetics to exacting standards of organisation, she found many valuable lessons in her stints with these two renowned culinary exponents.

“I am fortunate that I had the opportunity to learn from the best,” said Helly as she recalled how she met owner-chef Shaun after dining at Lûmé and expressed her desire to learn and help in his kitchen. To her surprise, he readily agreed. “I have learnt more from Shaun than anyone else in the short time that I worked in his kitchen, he was most supportive and very flexible.”

Similarly, she directly approached Michelin star chef Gaggan Anand when he was attending the 50 Best Restaurant Awards as a panellist and asked him to train her to cook. Lamenting the lack of Indian names among the upper echelons of the culinary world, she asked him to take her under his wings and he did.

“With Gaggan I was exposed to a very different atmosphere of a large commercial kitchen. I worked there for two and a half months and took up many shifts, on the tandoor, pastry section and other areas of the main kitchen and got a very robust training. Working with progressive Indian cuisine was an amazing part of my learning journey,” recollected Helly.

With EVL Helly brings together influences and flavours from various regions of India to offer a curated and truly unique experience. Working with produce from her own backyard, she introduces new courses through a prix fixe menu inspired by contemporary and traditional Indian cooking techniques. Her menu is as diverse as it is delicious. The customised experience is enhanced further with the synchronicity of plating and service.

Helly enjoys the experience as much as her guests and cannot pick favourites; however, she confesses that the only time she felt under pressure was when former MasterChef judge George Calombaris came to dine with his head sommelier, head chef, CEO and other team members. “I was very nervous as cooking for chefs is always nerve-wracking but George was light-hearted and put me at ease. It ended up being a great evening,” said Helly with a smile.

The fact that hers is not a commercial kitchen sets it apart. People tend to put their phones down and enjoy the conversations, sometimes with complete strangers on the dining table. They can watch Helly and her small team prepare the dishes and serve them to all the diners in unison. “In many cases, they almost forget that no meat was served, such is the beauty of our Indian inspired cuisine,” said Helly with pride.

Vegetarian food and degustation menus are on trend and sought after in Australia. Regional Indian food is a novelty and there is a lot of curiosity for new culinary experiences. “As a relatively young country, Australia is very open to adapt to new cultures and explore diversity. We are fortunate to have come to Australia at a time when we can contribute towards making its fabric richer,” said Helly in conclusion.\