When Matt Preston came to dinner at Helly Raichura's EnterViaLaundry 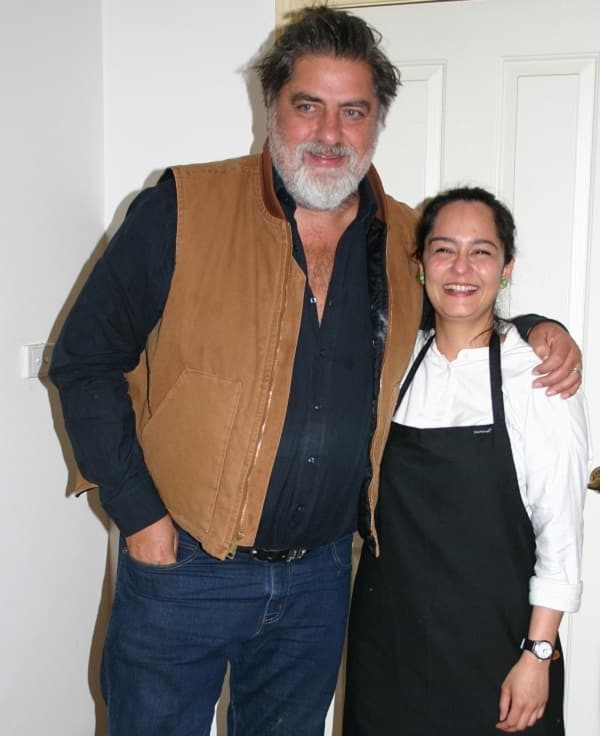 Just before launching his new book More which puts vegetable centre stage, celebrity chef and writer Matt Preston dined with an eclectic group of foodies at a special dinner hosted by Helly Raichura from EnterViaLaundry.

As the name suggests we entered the dimly lit, open plan kitchen via the Raichuras’ laundry into well-appointed, cosy dining and kitchen. After the introductions, we all settled in to wait for Matt to join us. Very soon he filled the tiny doorway with his impressive frame, sporting a relaxed look with a ponytail, zip jacket, and sports cap, sans the famous Preston cravat.

He had recently announced his exit from MasterChef’s new season and the private dinner was just prior to the announcement of the new judges so curiosity was high among those not in the know. There was much speculation with Matt sharing, with me, his thoughts on who could be the best judge but the MasterChef producers were smiling and tight-lipped.

Between all the guests, ranging from celebrities to doctors to a prison administrator, the environment was conducive to some really good across-the-table banter, a fair bit of it around food. Talk and taste were on the agenda with no conversation-stifling distractions like loud blaring music. The assembly of brilliant and influential figures from the cooking and entertainment world provided an invigorating boost to the dining experience.

One such memorable story from the night: Matt’s recount of how Akshay Kumar would arrive at work on MasterChef India via helicopter, in order to avoid rush-hour traffic.

Braving the most variable weather time in Melbourne, Helly’s kitchen, at that time, was getting equipped to launch its new spring menu. Helly’s choice of dishes were the result of fine-tuned intuition and creative courage. As the courses were introduced, one was impressed by the diversity of her menu, where elite elements were gathered from different regions of India to pair with Australian indigenous ingredients.

Quite a bit of attentive labour went into the presentation, taking things off to a fine footing. Bringing out nearly 100 portions of food on the table over three and half hours is never easy but Helly Raichura was on top of the game and brought both flair and technique to the menu.

Like an artist showcasing their creativity on each plate, she sent out each course, and you knew that at the core of each good looking plate lay her love for taking the mundane to masterful.

My personal favourite was the Shikhampuri Kebab with melt-in-your-mouth magic made of jackfruit, dahl, mint, coriander and finger lime. The Gucchi Pulao made with morels, aged basmati rice and Sandalwood nuts served with roasted garlic raita came a close second.

An honourable mention is a must for the Khandvi, cooked with besan, coconut, native basil and bush tomatoes, perfectly balanced with the nuanced heat of warm spices. The painstakingly created tender pasta like folds disappeared in my impatient mouth within seconds.

The Matla Undhiyo was another surprise, as the Gujaratis in the house would agree. It was nothing like the traditional Undhiyo I had eaten before. Helly had created hers with seasonal vegetables, paperbark, Davidson plums, onion jam and greens. The saltiness with tang, topped with spices, generated as much curiosity as the wattle seed Khichiya Pappads with finger lime, that were served at the beginning.

Every dish was a small explosion of taste that went down well teamed with the BYO wine and champers. Between conversations, the guests paused for a little reflection on each menu item, discussed its merits before moving on to the next sensation.

Helly elevated the experience by inviting us to ask questions and provide feedback on her dishes. She also briefly and a tad nervously explained the inspiration behind the dishes as they came out.

For dessert, the white asparagus, cantaloupe, lemon myrtle and Geraldton wax dish hit my bliss point. I seriously wanted to lick my plate.

Having learnt some tips and tricks from culinary royalty like Gaggan Anand and Shaun Quade, Helly firmly believes sumptuous cooking goes hand in hand with aesthetics. What’s more important we ask her – beautiful food or delicious food?  She replied, “Food that looks and smells good should surely taste good.”

We simply had to agree when she presented the dessert with a flourish, a box of sweets. The prettily packed Sandesh (Peach, Strawberry Gum and Rose) and Chiroti (Geraldton Wax, Native Flowers, Riberries) hit the right notes after that wonderful main course. All if it was then washed down nicely with some freshly brewed River Mint Tea.

The dinner ended but the conversations continued to flow, followed by a feel-good memory photo session with the exalted guests. This was Matt’s second visit to Helly’ s vegetarian kitchen, tying in quite well with his love of plant-based meals. He loves veggies because “they have more of everything; more texture, more flavour, more colours and more joy.”

We have no doubts that Helly Raichura agrees.