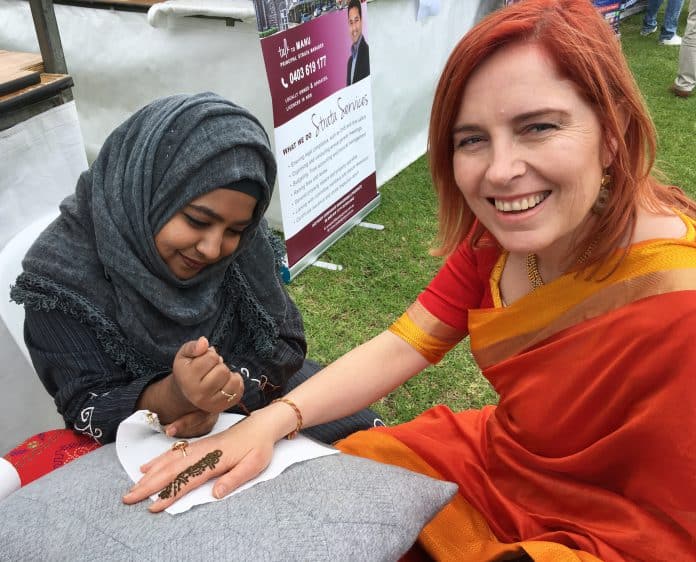 Reading Time: 2 minutesBaby steps for FIAN
The Federation of Indian Associations of NSW has successfully organised Indian Independence Day Fairs over the last few years and this year, under the exuberance of its President Yadu Singh, decided to hold a Diwali mela. In a veiled statement to other Indian organisations, Singh announced “Ours will be a free mela to attend, as opposed to others charging a fee to participate in a religious function.”

The only challenge was that in an overly crowded calendar of Diwali festivities, to find a suitable date as well as a venue to suit the needs of the western Sydney based Indian Australian community. The date finalised was a day after the Wigram Street Little India Fair and the Sunday preceding the Hindu Council Parramatta Park maha mela. And the venue was Merrylands, just a few kms west of Parramatta.
It may have been festivity fatigue in the community as the numbers attending were not as strong as expected. While obviously the organisers and business stall holders would have been keen to see larger numbers, the advantage was that there was sufficient time and space for all to move around and connect with each other. Premier Gladys Berejklian did a walkabout and met and interacted with various stall holders and members of the public. The speeches by the visiting guests were short and Diwali greetings were exchanged by the community.
If Dr Singh and team evolve their brand of Diwali festivities further, perhaps a venue closer to Parramatta – and a day which does not shadow other existing Diwali celebrations – can allow for a wonderful experience for all.
See pictures from other celebrations/melas across Sydney
CIA’s Little India Fair
Blacktown Diwali mela
AHIA Diwali
Deepavali Milan
South Sydney Diwali bash
Deepavali at Church
HCA Diwali
- Advertisement -
Share
WhatsApp
Facebook
Twitter
Linkedin
Previous articleDiwali scenes across Sydney: CIA's Little India Diwali
Next articleDiwali scenes across Sydney: Blacktown mela