A quick look at the Deepavali Milan celebrations this year. 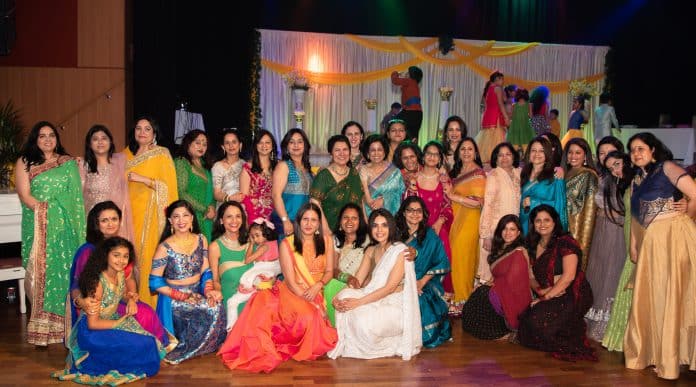 Reading Time: 2 minutesDeepavali Milan: Ten years
It was exactly ten years ago that Lt Col Virander and Mrs Kamini Sahni began a venture to celebrate Diwali at the neighbourhood level. Today they host hundreds. Their last two celebrations have seen no less than 400 attendees bring in the festival at the large mainstream venue of Hornsby RSL.

The North Shore Diwali do has grown wonderfully, boasting an organising committee of nine this year. Subash, Nitasha, Punam, Sushma, Shirley, Poornima and Shashi volunteered to help the Sahnis. Together, they introduced some delightful new elements, such as decorating the venue to reflect the specially picked colour theme – yellow and green, in a nod to our adopted home.
Yet tradition was maintained, in the Ganesh watching from his position at the top, in the welcome tikka, and in the lighting of the lamp to start off the evening.
And of course, in other instances, there was a welcome moulding of the traditional and the modern. In the singing of the aarti Jai Jagadish Hare the lyrics were displayed on the large screens to enable maximum participation. The invocation dance was a classical ‘jugalbandi’ of two styles of dancing, Mohiniyattam and Bharatanatyam.
For me personally, it was more a mix of emotions: as I drew the rangoli, I was reminded so very much of my mum, who had been traditionally entrusted with this job for many years.
The speeches were crisp and touched the right chord. Consul General B Vanlalwana spoke of Diwali as an opportunity for Indians to spread the “message of peace, brotherhood and friendship.” Community elder Gurdeep Singh spoke of the journey Deepavali Milan has taken over the years. Julian Leeser, Federal Member for Berowra, spoke of the strong bond that exists between the two communities. He impressed also with his Hindi, and his gracious performance of Indian dancing to Punjabi music.
Several dances and musical recitals spanned the evening. These included classical, Bollywood style as well as fusion numbers, and some wonderful singing by some of our community’s rising stars.
Henna, professional photographs, lucky draws and dance floor shenanigans completed the night.
A quaint touch that went down particularly well last year was reintroduced: ‘first Diwali’ for newborns and for newly married couples. May they see many happy Diwalis going forward.
The 10th Deepavali Milan was not only a social affair, it played an important philanthropic role too. It fund-raised for war widows in India, a cause close to the heart of the Sahnis given their own Services background. In addition, proceeds from the raffle tickets were also nominated for dementia patients attached to AASHA Australia.
See pictures from other celebrations/melas across Sydney
CIA’s Little India Fair
FIAN Diwali mela
Blacktown Diwali mela
AHIA Diwali
South Sydney Diwali bash
Deepavali at Church
HCA Diwali
- Advertisement -
Share
WhatsApp
Facebook
Twitter
Linkedin
Previous articleDiwali scenes across Sydney: AHIA celebrations
Next articleDiwali scenes: SSIA bash