Vande Bharat: ‘Indian Consulates will not rest till the last person stranded in Australia is evacuated’ 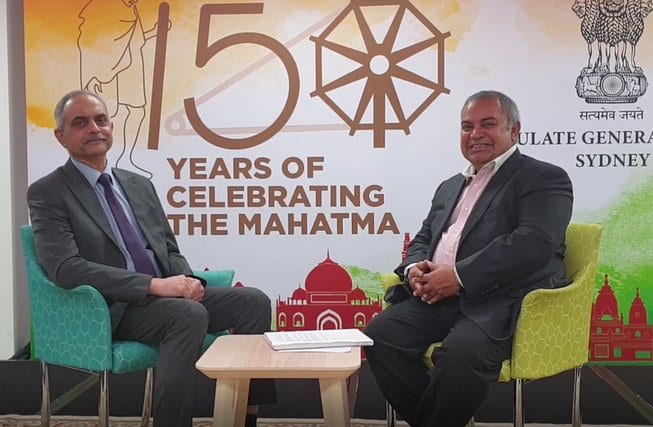 The process of repatriation is currently on for the thousands of Indian nationals left stranded outside of India following the closure of national borders due to COVID-19.

Here in Australia, the Indian High Commission and Consulates in Sydney and Melbourne have organised 15 repatriation flights so far in two phases, taking some 3,000 Indians back home since 21 May.

Nandakumaran Konnat, Consul at the Consulate General of India (Sydney), elaborates on the services offered by the Indian government and Air India through the Vande Bharat flights to take these citizens back home.

Pawan Luthra: Mr Konnat, what has the repatriation exercise been like so far?

Nandakumaran Konnat: These have been unique and curious circumstances. Initially, we knew there were people stranded here but we didn’t know the enormity of the situation. When things eased, we understood the number of people who had only planned to come for a short while.

On the last flight back to India before the lockdown began on 22 March, Air India told us there were nine odd seats vacant, so we called some people up and informed them. No one knew when the next flight would be.

We knew this uncertainty would not last forever, and the Government of India eventually took on this large-scale evacuation. When we look at Australia, we may not realise the enormity of the operation. In Phase I, there were close to 100 flights flying back to India from all over.

Q: How many people had registered to go back in Phases I and II?

The lists of registrations were dynamic, so it’s hard to give an exact number. For example, by natural human instinct, there have been duplicate registrations to increase the chances of getting a seat on a flight. In stages, we have managed to send people back home. There were seven flights in Phase I and eight flights in Phase II.

Q: Everybody would have had a compelling reason to travel. What was the process behind selecting people for the flights?

It was an absolute challenge. Everyone believes their problem is severe, how can a third person take a call? There were some difficult decisions, but we had set guidelines given by the government like considering people on short-term visas and tourist visas, and students visas that had ended. With our hands on our hearts, we think we did a sincere job.

Q: Can you share with us a ‘compelling reason’ to be on the flights?

There’s a parable about Lord Buddha that comes to mind. It’s a story of a young mother whose child had passed away. She went with the body to Lord Buddha and asked if he could bring the child back. He told her to go to return with a fistful of rice from a house where nobody has died. No matter how hard she looked, she couldn’t find one.

There’s no one stranded here in Australia who doesn’t have a compelling reason. It’s hard to determine whose problem is bigger. We had a case of a lady who travelled to Australia to help her daughter’s delivery, while her elderly husband was stuck in lockdown in India with no help. Everyone who has returned to India is a happy story.

Q: What lessons did you learn from Phase I?

We knew there was a mismatch between demand and supply, but supply was based on a lot of factors, as Australia wasn’t the only country considered for Vande Bharat.

Registration became a little more evaluated after our experience with Phase I. For example, there were couples who were separated when tickets were offered in Phase I. One spouse got a ticket, the other did not because their email IDs were different and there was no way to know families were booking together. By Phase II, we added a column about multiple registrations on the same email ID.

By Phase III, there was a vehement opinion from users that bookings should be left to themselves. This time, it was controlled first-come-first-serve, where people could log into the website after the announcement and buy their own tickets.

We still get complaints that tickets sold out within half an hour, but there are almost 1,600 people who got tickets.

Q: We’ve heard complaints from people that the website crashed while they were in the process of filling their details.

It’s still a game between demand and supply. I’m sure more flights will be announced. We will not rest until the last person stranded here is evacuated.

Q: What about the announcement by India’s Aviation Minister that chartered flights are being set up?

In the Vande Bharat mission, the government is operating its own carrier to evacuate people. Chartered flights are being run by groups in private enterprise. If any air transport operator here in Australia decides that they have enough people, have planned the economics and gotten the clearance, private charters can take place.

There have been people asking us about these flights and we have told them how to go about it, but we don’t have a role in it. Clearances have to be taken from the state they are going to. Logistics are controlled in India like quarantine and going home.

Q: Talk us through the mechanisms put in place by the consulates in Sydney and Melbourne before boarding the flight, and the quarantine situation when passengers landed in India.

Australia and India have their borders sealed. Anybody leaving Australia needs permission from Australian authorities. In the first two phases, the High Commission and the Consulates gave the list of names to the airlines who then informed people to buy tickets. About 48 hours before the flight date, the airlines would give us a final list and we would give it to the Department of Foreign Affairs and Trade (DFAT).

Our duty was to handle the crowd, ensure they had checked in, conduct their thermal and medical screening, and ensure they quarantined at their port of disembarkation. This last bit was necessary so that international travelers and domestic travelers in India didn’t get mixed up. Unless it’s a direct flight which goes to a destination other than Delhi or there’s a feeder flight (another aircraft to a different destination), they are required to quarantine where they disembark.

We got a lot of requests about excusing quarantine which defeats the purpose. Now (the regulations are) seven days at the port of disembarkation and seven days at home.

Q: So far, the Vande Bharat flights have taken off from Sydney and Melbourne. Any reason why other cities were not considered?