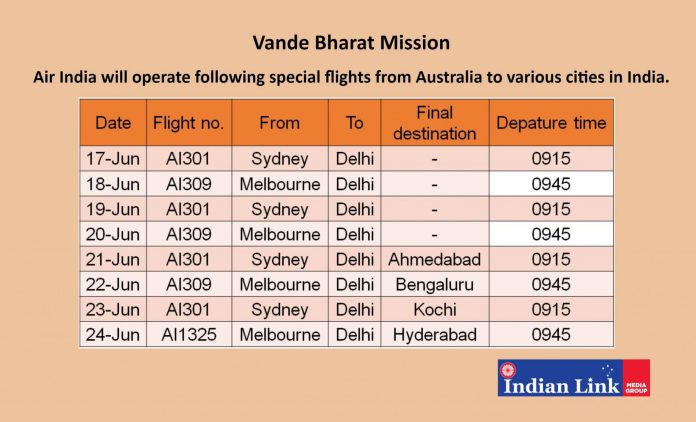 Phase Two of the Vande Bharat Mission which has been repatriating stranded Indians across the world, has eight flights allocated to Australia, Indian Link can confirm through informed sources.

With four from Melbourne and four from Sydney, these flights start on 17 June.

While four will have Delhi as their final destination, four will continue on to Ahmedabad, Bengaluru, Kochi and Hyderabad.

Each flight from Australia to India will have a capacity of 243 with some seats left vacant to allow for any passengers feeling sick on the flight. Onward journey from Delhi will allow for 149 passengers on board.

The State governments’ rules in India will factor in to the local travel of the returning stranded Indian residents. For example, Delhi now allows for seven days of quarantine at a local hotel and then there is flexibility to self-quarantine at home. Likewise, domestic flights also allow for more options of those selected to travel back.

In Australia, it is expected that those who had registered for Phase One and were not successful will still be considered for the next phase. Expect an announcement from the Indian High Commission for registration to open for those wanting to be considered for the next phase. As before, those with compelling reasons will be given preference. It is expected that there may be less pressure on applications from students who now may prefer to stay on in Australia as they settle into online study and as indications come in of universities opening up in the next 3-4 months.

One request to those registering is to give some thought of their willingness and ability to take the Vande Bharat flights, should they be selected.

In Phase One, it was frustrating to the officials that a number of those who were shortlisted, not only took time to finalise their decision but also then withdrew their application. This then shortened the window for the next person selected and put pressure on all.

“Being clear about their intentions should they receive a call from the High Commission, will allow us all to work better for all,” an informed source told Indian Link.

Over 57,000 Indian citizens around the globe have returned to India on flights which started on 6 May.

More details will be revealed as they come on hand. Travellers are urged to follow closely the official Indian government websites for more details.