A pivotal conversation that surrounds LGBTQIA+ discourse is the need to normalise queer relationships, as that is what they are — normal.

In late April, the Malayalam short film New Normal directed by Monisha Mohan Menon, premiered on YouTube. The 20-minute film shot in Kakkanad and Vazhakala under ViiBee productions, has now amassed over 2.5 million views. It has one message that director Menon wants to drive home: love should not be confined by gender.

It follows the trope of many romance films. The realisation of falling in love. Facing hardships. And a bittersweet ending.

New Normal begins with the lead character, Appu reminiscing on her first love experience. The opening features two unknown women holding hands with animated butterflies fluttering around them, symbolic of the feeling of being in love, the flighty nature of first loves, and love as a primal and natural connection. 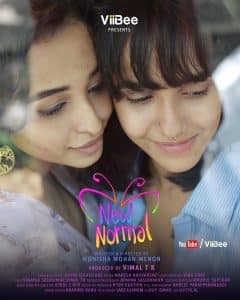 We are brought back in time with Appu steering the narrative to a dance class where she is getting teased by her male friends for admiring a picture of Deepika Padukone, who say “Let the boys do this.”

We meet the love interest Isha, who is singing a romantic song with her focus on Appu.

Given the format of the short film, the pacing may feel rushed, but Appu fills in the blanks by directly talking to the camera.

Cue a key moment in the film: the admission of the couple’s admiration for each other.

It begins with Appu hesitant to share some information, where Isha prompts her. Appu says, “I thought I only liked boys. But I like girls too.”

After dating for 3 months, the couple’s honeymoon period begins to drift away. Appu’s mother sees a photo of the girls kissing and tells her that the relationship is unnatural, Prakruthi Virodhi she says. Shame and fear are the byproducts of this exchange.

There was a flood of YouTube comments praising the film and one person shared their personal story of their struggle with sexuality: ‘As a bisexual Mallu, I live in the UK which is very tolerant and respective for the LGBTQ. However, my family isn’t. Seeing this makes me believe that there are people in Kerala who can accept me as who I am…thank you for making this.’

Another commenter said: ‘Being bi is normal, any member of LGBTIQ, being straight is normal. What is not normal is some people’s thoughts.’