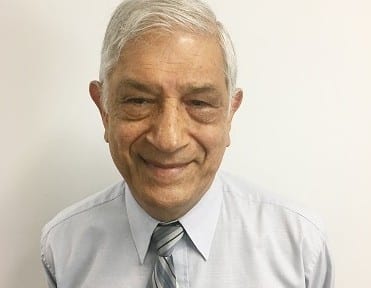 How do surgeons treat a ruptured brain aneurysm? Well, in the ‘old’ days, they would saw through the skull to get to the artery. Today, most likely, they would employ what is called endovascular coiling: they would go in through an artery in the groin, insert a catheter that would travel up to the brain, and then through it, push up some platinum coils or acrylic glue to fill up the aneurysm, so that blood flow to it is stopped.
The newer technique is much less invasive.
The ‘old’ days, you might be surprised to learn, was not that long ago. The coil technique was introduced in 1995, and went through seven years of trials before it came into widespread use. In Australia, Perth-based radiologist Prof. Mark Khangure was one of the early practitioners involved in the trials.
In this year’s Australia Day honours, Prof. Mark (Makhan Singh) Khangure has been felicitated for his work in neuroradiology, among other things.
“I was delighted when I heard the news,” he tells Indian Link in his trademark gentle manner.
In a career that spans almost half a century, Prof. Khangure has not only been practising neuroradiology (a subspecialty of radiology focusing on the diagnosis and characterization of abnormalities of the brain, head, neck and spine), but has also been involved in counselling, teaching, research and advocacy.
He has also served on the boards of a number of medical organisations including Australian and New Zealand Society of Neuroradiology, Royal Australian and New Zealand College of Radiologists and the Australian Medical Association.
Mentoring other trainees and advocating for radiologists have been particular passions that continue to this day.

“I like to tell younger practitioners to be involved with their careers in a broader sense, over and above merely earning a living,” he reveals. “I want them to think about consumer concerns, government funding, equipment update, advocate for private treatment, and generally to be honest and provide what patients expect.”

Prof. Khangure was born in India but grew up in the UK where his family moved when he was nine. He finished university there and worked briefly before moving to Perth in 1976. He worked with the Royal Perth Hospital until 2006 but for a brief stint in the US for further training. It was at Royal Perth that the clinical trials for endovascular coiling were undertaken.
The professor’s links with the land of his birth continues in a professional sense. “I’ve been teaching in Mumbai about procedures for ruptured aneurysms without surgery, in both public and private hospitals. Trainees have come here too, to learn from us: a young Indian doctor worked with us for a year before setting up in India. Other than India, we have been training radiologists in UK, Germany, Singapore and Malaysia.”
Today he continues to work actively, but for a private radiology group, and is mostly involved in diagnosis.
“I’m like a high-end sportsperson who has climbed the peak before falling back into the precipice!” he laughs.
When not seeing patients, Prof. Khangure is into long distance walking, classical music, theatre, travelling, and spending time with his grandchildren.