All dolled up and ready to canter 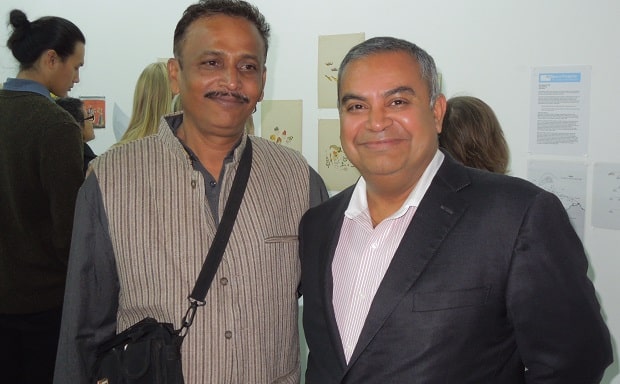 The horse has interesting symbolism in art.

It is a symbol of energy, of a driving force that carries you through life. It also represents freedom of expression, especially as the instinctive wild and tamed aspects of personality are balanced. As such, the horse is a perfect medium for Indian artist Ajay Sharma’s work.

In a recent Sydney exhibition The Speed of Life, he uses a series of horses to lament the loss of traditions and family values, and an increasing disconnect with nature, as a result of modernisation and globalisation.

In Family, we see a brilliant blue horse at a gallop, with a giant Rajasthani umbrella in the background. There are intricate patterns painted in gold on the horse, but look closely and you’ll find the front half subtly different from the back half. The back of the horse is embellished in great detail, whereas even the gold seems a bit dull on the front of the horse.

“The back half represents tradition, and the front half, modernity,” Sharma explained to Indian Link. “The horse stands for today’s youth in India. They have strong roots in tradition but want to gallop ahead with the new ways of the world. Notice the hooves in the front are differently coloured too”.

“That’s the shelter that the family will always provide”.

Ajay Sharma, India’s leading miniaturist, was in Sydney recently, invited by the Sydney-based AirSpace Projects, to present an exhibition and a workshop on miniature painting.

Most Indian homes have some samples of Indian miniature art on their walls, even here in Australia, whether of Mughal life or of the eternal lovers Radha and Krishna. Ajay Sharma’s work is a modern take on a centuries-old tradition.

India’s miniature art originated hundreds of years ago and evolved through Persian, Islamic, Mughal, Rajput, even British, influences. Today it has survived to tell its own tale as an amalgam of all of these influences. Yet, as Sharma has proved, it can still be an independent and innovative art form that can be used to cast a contemporary look on life.

In a career spanning some 40 years, Ajay has devoted himself to conserving and perpetuating this age-old practice. He heads a studio of artists and students in Jaipur, India, launched in 1984, where all aspects of the art form, including composition, drawing, conservation, copy work, and the research and preparation of pigments, are practiced.

During his Sydney visit, Sharma shared some fascinating stories about his art, such as the process in which he creates the wasli paper on which the works are made. He also described how, in the early days, he made his own paintbrushes by physically catching the squirrels to extract the fine hair from their tails, and how he creates his particular blend of smoky black, by using soot. All other colours and materials are also produced in the traditional way, using locally sourced supplies.

Sharma has been instrumental in taking the Rajasthani style of miniature art to some of the world’s leading art institutions, in the form of both exhibitions and workshops.

Many non-Indian artists have now taken up the art form. These include Scottish artist Olivia Fraser, who collaborates with Sharma on a regular basis. There’s an interesting story here: Olivia Fraser’s ancestor James Fraser worked on many Indian miniatures himself in the early 1800s. They lay forgotten, in a trunk somewhere in Scotland, till 1979 when the family discovered them. Today as the ‘Fraser Album’, they are considered a valuable collection of Indian art that depict life in the Mughal era.

Ajay Sharma’s own work is a comment on contemporary India: the psychosocial implications of rampant and unsustainable modernisation in a society that is grappling with the notion of tradition versus modernisation.