There are an estimated 450,000 people of Indian ancestry in Australia. Some 163,000 Indians migrated to Australia in the last five years alone. But Australians living and working in India are still a rare breed. Just as the average Indian migrant faces a mixed bag of experiences – some pleasant and some challenging – it’s a tricky affair for Aussie expats living in India as well. In this new series, we speak to such Aussies about their life in India – what took them there, what they do, and what they have learnt about a different culture and a new way of life. 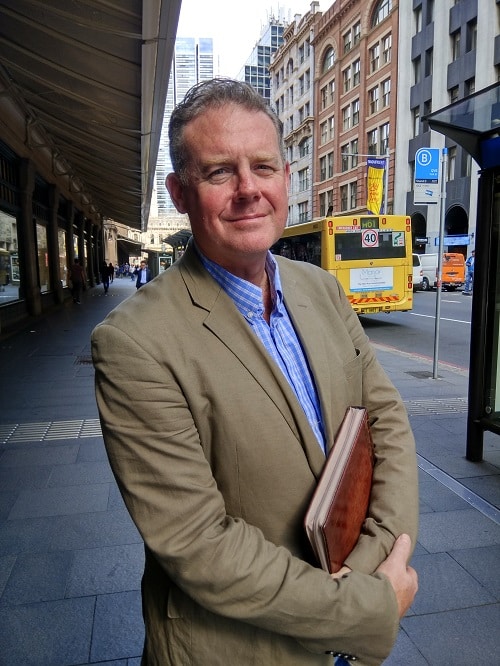 This issue, we chat with JAMES NEWMAN, CEO of the Delhi-based Elephant Energy Private Limited, which transforms landfill waste into renewable energy.

A mountain of waste 20 stories high.

We’ll give you a moment to let that s(t)ink in.

For most, it would be a revolting sight. But for James Newman, who saw the monster pile at a landfill site just outside New Delhi a few years ago, it was opportunity.

While the company’s efforts to deal with overflowing landfills align perfectly with the Indian government’s ambitious Swachch Bharat (Clean India) Mission, the environmentally-friendly generation of electricity reduces the power deficit in the country.

As an expat working in India, Newman has had familiar challenges: bureaucratic delays, changing political climate, cultural differences. But he has met mostly good people along the way, he reveals, and adds that he sees huge potential for the business and the clean energy sector.

On the personal front, he says that India has been interesting (Delhi’s brutal heat aside), that he’s learnt a few Hindi words, and he loves Goan fish curry… in Shimla.

What do you do in India?

About 5-6 years ago, a friend of mine developed a waste-to-energy technology that I invested in. We then won a project with the New Delhi Municipal Corporation (NDMC). This was for three 70-tonne facilities, meaning facilities that process 70 tonnes of waste a day. This was even before (Indian Prime Minister) Mr Modi announced the Swachh Bharat Mission.

We like to feel that, with our project, we are a solution to Swachh Bharat. Delhi produces 9,500 tonnes of waste every day, so such projects are needed.

We also have another 70-100-tonne facility in Shimla where we are concentrating at the moment. The projects in Delhi are currently on hold.

So, how exactly do you go from waste to energy?

We basically turn carbon-based waste streams into electricity. We get truckloads of waste, which we then segregate with the help of machines as well as labourers.

Once all the glass, metal etc has been separated, we are left with combustible material such as food, paper, plastic and so on. With the help of a process known as gasification, we indirectly heat the waste. This produces a char, which in most cases is inert, and a lot of gases that are combustible. So, you can run a gas engine with it to produce electricity.

What challenges have you faced at work?

Well, first up, there have been positive changes in how PM Narendra Modi is trying to change to how things happen in India and promote electronic behaviour in government offices. India’s paper-driven system and files are all very well known. But dealing with the bureaucracy can be frustrating, especially for someone used to the Western way of doing things. So, it was very difficult.

The thing is that the doors are easy to open in India. It’s getting through the last set of doors that’s difficult. Waste is a massive problem in India, as it is in all developing countries. Add to that the fact that there are 300 million Indians that don’t have electricity. So, if we can make electricity then that’s a good thing as well.

How did you first get to India?

We continue to look at all South Asian countries. India is where there was British law, and where English is spoken broadly. Most importantly, India was where we won our first project with the NDMC. There are some 3,000-4,000 similar sites in India. So, it’s an attractive market if we get it right.

What did you feel when you first saw the mountains of waste on the outskirts of Delhi?

It is one of the most amazing things I have ever seen. Delhi is a flat city and there is this huge mountain that’s about 20 stories high and 40 acres in size.

Landfill sites have been overfull for 10 years. The problem for the government is what to do with it. A 70-tonne facility is a very small site but we can deliver a decentralised solution to the problem.

The needle of Australian-Indian bilateral trade has been stuck at $15 billion for some time now. Why aren’t there more Australian companies in India?

It’s certainly challenging. I was warned about the cultural differences.

Although because of the colonial influence, cricket and so on, it may seem on the surface that the two countries have a lot in common, India is very, very different in the way business is conducted.

Building relationships over a long period of time is something that is taken for granted here, but in a developing country, if there is a dollar on the table, the tendency is to take it. So, it has been difficult to find partners rather than people who are just trying to make their dollar today and forget about tomorrow.

The way India operates can be frustrating. There is bureaucracy, paperwork and delays, and often wilful delays as a way to incite some payments, whether asked or otherwise. We are a small, agile business, so we’re able to act in an agile way.

But if you’re a large conglomerate from Australia with a big structures, it is a very big challenge to get things done. These delays have no purpose and the expertise of doing it is extraordinary. But I can see that there is an appetite for change. Mr Modi is promising to drain the swamp. He is making changes. It’s a 20-year process but he will have to stick to it.

Let’s talk about your personal experiences of India now. What was your first impression?

I am in India 2 weeks out of 6 now. The first impression was of the Delhi airport, and it was good. The traffic, cars were ‘interesting’ but there were terrible roads. And it was hot! Delhi was so hot. I spent an Indian summer working outside in Delhi, when it was 44, 46, 48 degrees.

Adjusting, what was the most difficult bit?

Food can be a bit difficult. I have been careful about what I eat in India and have never been sick. The Indian diet is a lot richer that I thought, and sugary, creamy and oily. I have never appreciated salads more when I come back to Australia!

What did you find to be the most strange?

It was just coming to terms with how things work. Even the politics is so sophisticated and Machiavellian. Parties don’t seem to mean the same things there as they do here. So, trying to get the read of how things happen is quite difficult.

For example, the concepts of honesty are different in an Australian context. There is a lot more forgiveness in India than there is in Australia. “I am sorry, let’s move on and forget about the whole thing” is a sort of accepted behaviour in India a lot more. So, you can’t be sure of where people are coming from, unless they’ve dealt with Westerners.

Figured out the head wobble?

I think so. We ask our Indian staff who do the head wobble if they are saying yes or no. I think it means ‘I’m hearing you,’ and it doesn’t really mean much else than that.

What was the easiest thing settling in India?

It’s hard to be there away from family but our Indian staff and the Indian director are helpful and have shown us the lay of the land. We met some people in government who are really good. There are many who want to make a difference and there seems to a big motivation across the board to lift India.

How did your neighbours treat you when you first moved in?

Well, the people are friendly. There are lots of old people walking in Safdarjung Enclave, where we have an apartment, and they say good morning to me.

Apart from family and friends, what do you miss about Australia?

Clean air! And the food. The food quality in Australia in fantastic. We get good fresh food in Shimla, it’s different but it’s fresh.

I really need to get to Taj Mahal. It’s probably been embarrassing (that I haven’t been there yet). But I do want to take my wife there. I would also like to go to Manali. I haven’t been to Mumbai. Bengaluru is a good city. And I need to see some cricket matches!

Do you see yourself long-term in India?

From business perspective, yes. In the future, I will still be coming to India but probably for short, sharp, more targeted visits.

Read a book by an Indian writer?

I know how to direct the tuk-tuks, so I know words such as ‘seedha’ (straight) and ‘chowk’ (junction). There is a lot of Hinglish that gets you by.

I do like my curries, and quite like spicy food. There’s a restaurant in Shimla that cooks a great Goan fish curry.

No! There are a couple of staff in Shimla that are quite good cooks. One of them makes chapatti and he makes it look easier than it is.

Apart from Mr Modi who you mentioned a few times, who is your favourite Indian personality?

Sachin Tendulkar is my favourite Indian cricketer, and Dhoni. Some of the other cricketers less so (chuckles)! No, Virat Kohli is a fantastic cricketer and I am sure he is a good man.

I don’t understand them. I usually see them when I get a haircut. Some of them look, um, humorous.

Jai Ho. Love that one.

Any advice to Aussies looking to work in India?

You need to have someone on the ground who knows how things operate that you can trust. A lot of activities going on around you are foreign. Without our Indian director, balancing things would have been a lot more difficult. Australians are a little brash while Indians are very respectful and polite. So, barring the educated people who know the Australian behaviour, Australian directness can be taken the wrong way.

Being locked in our homes is a snatched privilege