Excitement is building gradually for the upcoming ICC Men’s T20 World Cup 2022, to be held in Oct-Nov this year.

Tickets went on sale two months ago, and for the South Asian community at least, the matches of interest saw pick-up that would have the local organisers reasonably happy.

This week, the organisers announced their ‘2022 Champions’ who will help support a global celebration of Australia’s cultural diversity in the lead up to and through the event.

The aim of the Champions program is to bring communities together over a shared passion over the game of cricket.

Each Champion will connect people through cricket and culture to instil a sense of belonging and inclusion. 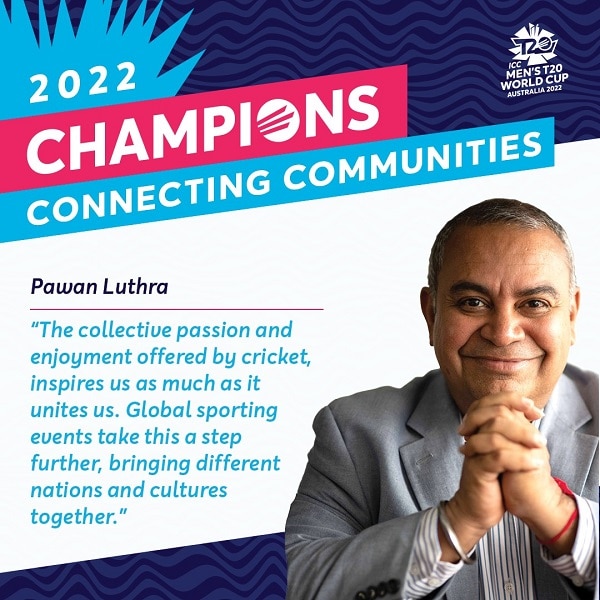 For each, it will be an opportunity to advocate for inclusion and diversity through the platform of cricket and a home T20 World Cup.

Local Organising Committee CEO, Michelle Enright, said, “On behalf of the ICC and the entire LOC, we are incredibly grateful to each and every Champion who has joined our team to embrace and celebrate Australia’s cultural diversity through the shared love of cricket”

Of the 36 Champions, 18 return to the program after serving a similar role in the T20 ICC Women’ World Cup of 2020.
“After seeing the positive impact it made on women’s and girls’ sport in this country, I’m excited to see what we can achieve this year as people start reconnecting with their community and look forward to new experiences together,” Enright observed.

Besides these influencers, the organisers are also reaching out to multicultural Australia by building Facebook communities. If as Indian-origin readers, you’re not yet a part of SQUAD India Facebook group, then you might want to check in.

16 international teams will play 45 matches. The final will take place on Sunday November 13 at the Melbourne Cricket Ground.

The ICC Men’s T20 World Cup 2022 will feature 16 international teams playing 45 matches with the final to played on Sunday November 13 at the Melbourne Cricket Ground.