Home Australia News School strike: “We’d be in school if you did your job”

On a seemingly unassuming Friday – a regular school day – the steps of the South Australian Parliament were flooded with a mass of school students. We came from all over; primary school students, high school students, university students, as well as the youth, the elderly, and families.

Over 5,000 of us stood united for a common cause; the climate crisis. 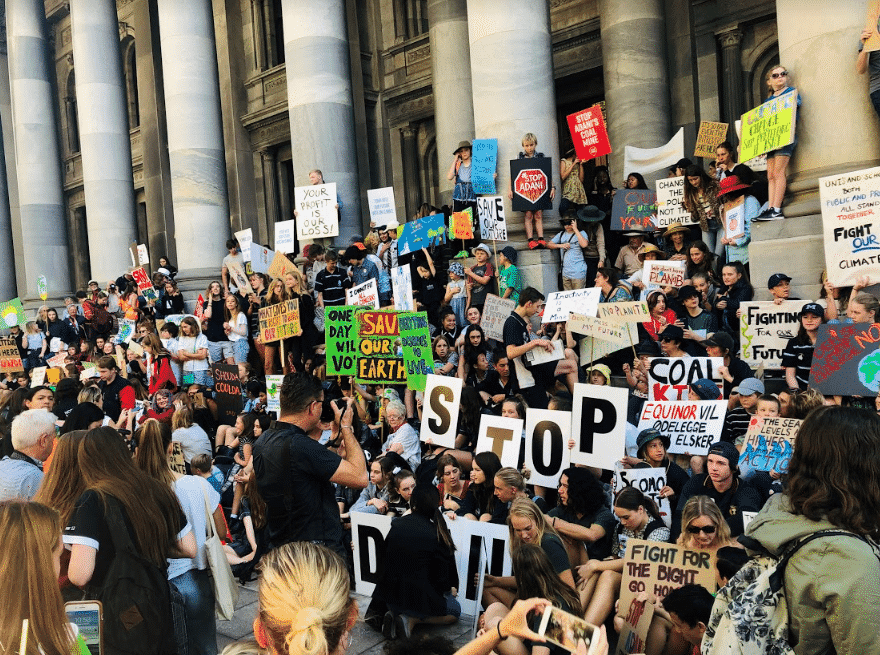 Inspired by Swedish teenager and climate change activist, Greta Thunberg, who held the first school strike for climate, the rest of us took to the streets.

This movement had to happen, we didn’t have a choice.

Enough was enough, we decided. And so, Australia, and the world, witnessed the activist force of thousands of school students fighting for climate action and justice.

It had been building up for over weeks. Plans carefully made, parents convinced, and schools contacted. But still, it was a happy surprise to turn up to the strike and see the enormous turnout that occurred in Adelaide. It exceeded every expectation. People cared. It was not only the students who had come out to protest, but also the generations before us, who rocked up to show their support.

The day was hot and sweaty. I could feel myself sweating through my uniform, my bag heavy on my back. Everybody could feel the heat, standing between throngs of people. As we marched, and shouted, and protested, as the speeches rivalled the scorching sun with their tremendous passion, the heat became a constant reminder.

Why were we here?

Carbon pollution from burning fossil fuels like coal, oil, and natural gas is changing our climate and warming our planet. It’s simple: the more carbon pollution in the air, the more the sun’s energy gets trapped as heat. Which means things keep getting hotter. In fact, the world has already gotten nearly 1°C warmer since 1880.

Warmer temperatures have real consequences for all of us – not just for polar bears. Sea levels around the world have risen nearly 20cm since 1901, swallowing entire islands and creeping closer to populated areas of great coastal cities like New York, Melbourne and Dakar. Plus, extreme weather events like hurricanes, floods and droughts are becoming more frequent and intense.

So why then, was no action being taken to stop this? Why was this burden being placed on the shoulders of schoolchildren?

Big polluters like oil and coal companies aren’t going down without a fight. After all, they’re making billions from dirty energy while the rest of us pay to clean up their mess. That’s why they’ve spent decades running well-funded campaigns to mislead and deceive the public about what’s really happening to the planet.

For years, as we grew up, we watched as the climate debate happen before our very eyes; on television, on the news, in the newspapers, and even in our classrooms. We sat back and we watched, and we listened. We decided to trust the people in power to make the right decisions. After all, this was our future, our lives, that they were debating – but they were dismissing and ignoring and sweeping under the rug.

And today, there is no debate. Climate change is real and happening now and is most definitely a crisis.

The lapse in what climate experts are saying and in the actions that are being taken in society have such a drastic difference that we have decided to take matters into our own hands.

The only power we had over the Government was that they wanted us in schools. So, we took that away. We marched for not only stopping Adani, but for keeping the fossil fuels in the ground, for reducing carbon emissions as per the Paris Agreement, for necessary policies on global warming.

And we will continue to strike, protest, and act, until our objectives are achieved. Because if we don’t take action now, there will be no future generations.

As Greta Thunberg so succinctly put it, “We have had thirty years of pep talking and selling positive ideas. But it doesn’t work. We do not need your hope, we need your action.”

Stolen Shiva returns home to dance on at remote temple