As the Jewish community celebrates Rosh Hashanah and Indians gear up for Diwali, representatives come together for an evening of friendship and celebration 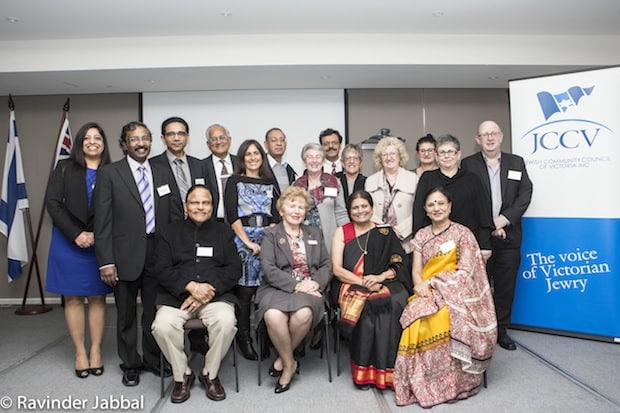 The best way to build a friendship is to break bread together. At the inaugural Jewish Community Council of Victoria (JCCV) Jewish-Indian Friendship Dinner, representatives from both the Jewish and Indian communities gathered over a Kosher meal at the Beth Weizmann Community Centre, paving the way for better collaboration and cooperation between the two communities. The event was supported by the Victorian Multicultural Commission (VMC).

David Marlow, executive director of JCCV, welcomed the guests while Nina Bassat, president of JCCV, talked about how India and Israel have enjoyed an extensive economic, military and strategic relationship. According to Ms Bassat, the bilateral relationship between the two countries is flourishing, close and cooperative. Ms Bassat also spoke about the festival of Rosh Hashanah that marks the beginning of the Jewish New Year and symbolises the continuity of creation.

Chidambaram (Srini) Srinivasan, VMC Commissioner, thanked JCCV for organising the event and spoke at length about the historic links between the Indian and Jewish communities going back to ancient times. He spoke about Jewish settlement in India and their assimilation into the Indian community without facing any anti-Semitic sentiments from the vast majority of Hindus in India. He also outlined the role of the VMC and how the organisation takes pride in supporting such events of multicultural significance and in promoting harmony among communities in Victoria.

Chairman of the Victorian Multicultural Commission, Chin Tan congratulated the Jewish community and JCCV for taking the initiative of engaging with other communities. Providing an opportunity to embrace similarities as well as differences will provide a strong foundation and set an example to the rest of the world which seems to be struggling to live together in peace, he said.

During the course of the evening two short films were shown to the audience accompanied by a description from filmmaker Anita Brar. A trailer was also presented for Anita Brar’s film Crossing the Line which delves into the partition experiences of Indians and Pakistanis residing in Australia.

According to Anita, the film would find resonance within the Jewish community, especially Holocaust survivors, who witnessed and experienced similar painful events to the sub continental communtiy , being uprooted from home and country.

To conclude the formal part of the event Jennifer Huppert, Vice-President of the JCCV, offered a vote of thanks. Leaders of both communities continued to discuss various topics whilst exploring and celebrating connections, with an aim to continue building a positive and mutually beneficial relationship in future.

Gathered for a multicultural meal